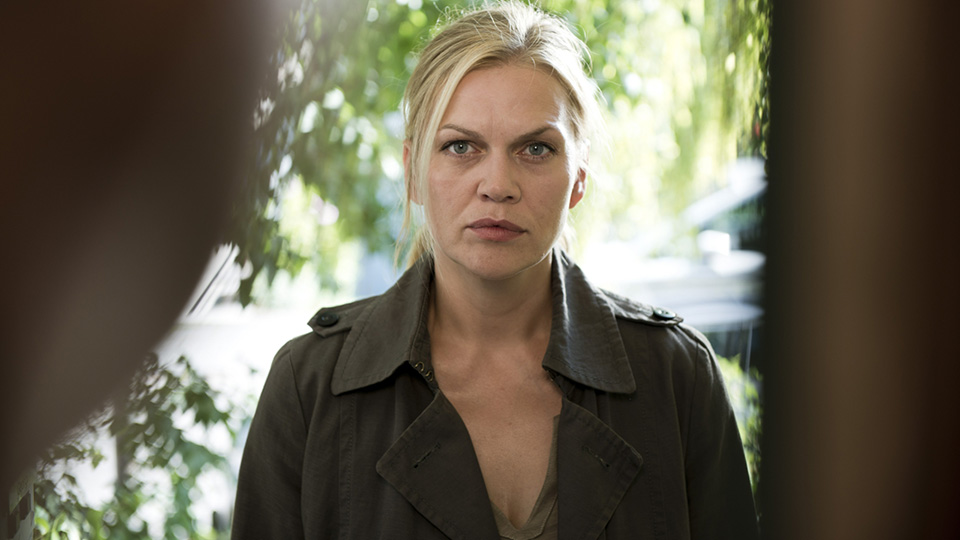 In the opening scene of this 12-part (90 minutes per episode) thriller set in the German city of Dusseldorf we see a young woman – Tatjana Decker – escaping from the boot of a car at night. She’s bare-foot and wearing a slip, but nothing else. She’s clearly been attacked and help captive before being released. She finds herself in a car-park where she discovers an emergency police phone-box.

If you want to avoid all spoilers for Walter Presents: Helen Dorn, stop reading this article now.

Cut to a few days later and Tatjana’s body has washed up on the banks of the Rhine, and Detective Helen Dorn (Anna Loos) – who had been relocated to the Duisberg-West police force for the past four years for reasons we discover later – is brought back to investigate. Dorn had been the lead investigator of a series of three murders some years ago that display alarming similarities with this latest murder; however, a man was convicted of those killings – and he’s still locked up.

Dorn is partnered with Gregor Georgi (Matthias Matschke), a detective new to the team; a stoic family man, he’s unhappy to be partnered with tarnished Dorn (the animosity goes both ways) and constantly digs at the perceived incompetency of the original investigation that she headed-up. But new investigations reveal that Tatjana had a peeping Tom – a neighbour who used the camera in her laptop to spy on her in her flat; and those recordings of this reclusive and seemingly friendless girl reveal a secret life that might go some way to explain how she became involved in the situation she found herself.

The show is nicely acted, but the characters are all so dour. I know they’re investigating murders, but no-one cracks so much as a smile, and everyone is uptight and lacking in empathy. There are corrupt coppers, dodgy doctors – it’s difficult to find anyone to root for. And in terms of plot, there are some things that don’t sit well. Why didn’t Tatjana give more information to the police when talking to them on the phone? She gave her first name, but failed to answer any of the questions about her attacker, her surname, location, etc. I know she would have been traumatised by the attack, but she would surely have responded more helpfully to the questions asked of her before she came to a sticky end?

In the end, it’s all wrapped up neatly when a key piece of evidence is discovered, and the true perpetrator is brought to justice. Each episode is a stand-alone story, it seems – although I’m sure we’ll learn more of a back-story about Helen as time goes on, as there’s clearly more to her history than this first episode reveals.

If you enjoy police procedurals and strong female leads, then this could be for you. It won’t set any hearts racing in terms of storylines or plot, but it’s a pleasurable journey.

Helen Dorn is available on All 4 now courtesy of Walter Presents.

In this article:Helen Dorn, Walter Presents