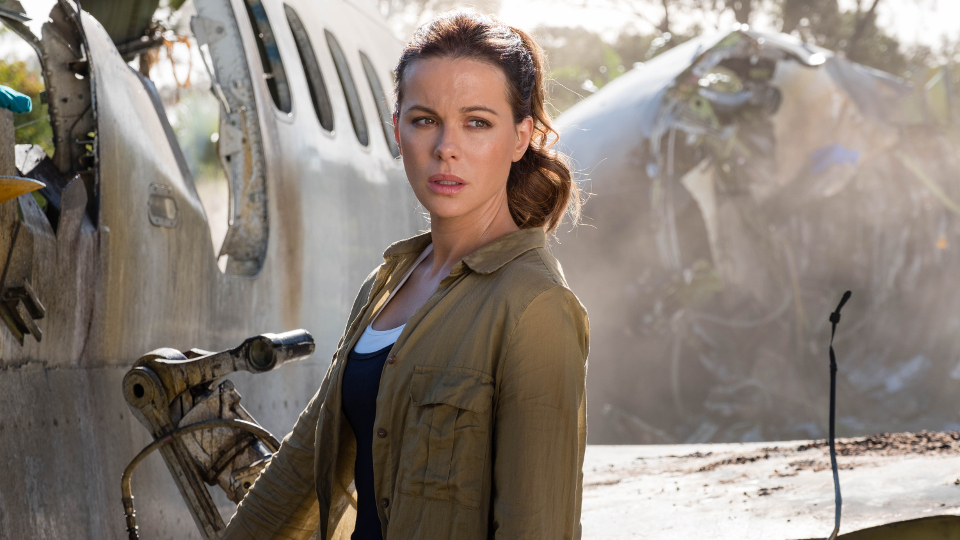 On the season premiere of The Widow, Georgia Wells (Kate Beckinsale) headed back to Kinshasa in the Democratic Republic of the Congo looking to uncover the truth about the disappearance of her husband three years earlier.

The episode opened up in Namoya in the Democratic Republic of the Congo (DRC) with two children, a girl named Adidja (Shalom Nyandiko) and a boy named Molisho (Likho Mango). The girl climbed high into the trees as the boy looked up worried. As she went higher she said that she wanted to see the whole world and was treated with a stunning view of the tree tops for her effort. A man began shouting nearby and he sounded angry. After climbing back down to join Molisho, it seemed that the pair were child soldiers as they picked up an AK-47 each and rejoined a heavily armed group. They later raided a school to recruit more soldiers.

The action switched to Brecknockshire, Wales where Georgia had been out to catch rabbit. As she walked home she tripped and fell which resulted in a nasty injury to her leg. She managed to hobble back home and realised she would need stitches. Unfortunately her car wouldn’t start so she began the long walk (limp) to the nearest village for treatment. At the doctor’s surgery she was given a patient registration form to complete and began to fill it in. As she got to the marriage status section she paused.

The episode flashed back three years earlier, when she woke up in bed to find her husband, Will Mason (Matthew Le Nevez) watching her sleep. It was their 10th anniversary and also the day that Will was due to fly to the DRC. They had to rush out of bed because the clocks had gone forward and Will was in danger of being late. At the airport, they said their goodbyes and Will headed for his flight. Before she drove off her phone rang and it was Will. He’d left her something in the glove box and when she opened it she found a black leather glove which had a ring inside.

Back to the present, Georgia had her leg stitched up and the nurse noticed a long scar on her arm which was presumably from a suicide attempt. Georgia covered it up and went back to reception where she spotted something on the TV in a news report about violent riots in Kinshasa in the DRC. She frantically asked the receptionist to rewind it for her.

The episode jumped back to a phone call from Will to Georgia. He was waiting for an internal flight from Goma to Kinshasa before his flight back to the UK. He said he’d call when he arrived back. In the middle of the night, Georgia was awoke by a phone call from Judith Gray (Alex Kingston) to inform her that Will’s flight had gone missing. Back to the present, she spotted a man on the news report who appeared to be Will.

Georgia paid a visit to her godfather Martin Benson (Charles Dance). He had blown up photos from the news report of the man she thought might be Will. Martin said it could have been anyone and was adamant that it wasn’t Will. He told her to forget about it.

Back in the past, Georgia headed to Kinshasa. At the airport she attended a press conference about the missing flight with the other relatives. They discovered that the plane had crashed and that the authorities had found the wreckage. A man Hennie Botha (Bart Fouche) approached her and explained that his brother had also been on the plane. The Minister of Transport (Alfani Sumaili) arrived and gave a briefing in French. They couldn’t understand by another man called Emmanuel Kazadi (Jacky Ido) translated. He said that the plane had crashed in the jungle and so far there were no survivors. He was also upset that the minister said the tragedy was made worse because a rival politician had been aboard.

Back in the present, Georgia ignored the advice from Martin and headed back to Kinshasa. After landing, a man stole her suitcase while she was distracted. Outside she found Emmanuel waiting for her. She showed him the photograph from the news report and he offered to make some calls to his other journalist friends to see what he could find out. Emmanuel dropped Georgia off at Judith’s house where she was staying. Back home he found a man smashing his car windscreen in and had to fight him off.

Judith had to dash off due to a crisis at work. She still worked for DRC Aid the same company that Will had worked for. She spoke to a colleague called Joshua (Matthew Gravelle) and he asked about Georgia. Judith said that Georgia was convinced that Will was somehow still alive. He passed a comment that Will had a reason to disappear and Judith replied that Georgia didn’t know about that.

Back home, Judith pushed Georgia that it couldn’t be Will in the picture. Emmanuel called and asked her to come over as he’d found something. He showed her some CCTV that showed the man again that she thought was Will. However, this time he was with Hennie Botha who had hold of the back of his neck and had a gun.

Another flashback to after the crash showed Georgia, Hennie and Emmanuel drinking in a bar. The spoke of their lost relatives. The barman (Chris Tummings) came over and spoke to Hennie, calling him Mr Tequila. A news report came in with reports of a survivor.

Georgia and Emmanuel did some more digging and noticed something strange amount the manifest. There was no mention of Hennie’s brother on the list and Georgia wondered if he’d given his real name. They decided they needed to find him and remembered the barman seemed to know him. They went to the bar and found out that he was called Mboyo Lipasa but had moved on. He now lived in a dangerous slum but Georgia said they had to try and find him. They tracked him down and asked about Mr Tequila. After they gave him money he said that he knew Hennie’s real name to be Pieter Bellow.

Pieter was show to be at the school that was raided where he met with the man in charge of the child soldiers. He gave him a bag stuffed with cash and said if things worked out there would be plenty more.

Elsewhere in the episode, in Rotterdam, Ariel Helgason (Ólafur Darri Ólafsson) was undergoing some tests for acceptance on a clinical trial. He had been blinded in the past but the trial had a chance of restoring his sight. In the waiting area he sat next to a woman called Beatrix (Louise Brealey) who was also blind and there for the trial.

They decided to go for a drink together and headed to a cafe where they sat and chatted. Ariel said he hadn’t been blind too long and hadn’t yet learned to appreciate his other senses. Beatrix explained that she had been blind since the age of 14. She was interested to know how he became blind and he said he struggled to talk about it. He then revealed that he was the only survivor of the plane crash in the Congo.

At the end of the episode, Georgia and Emmanuel went back to Judith’s. There they found a car had been rented for Georgia. It was an Audi, the same make, model and colour as the one she drove to drop Will at the airport. Georgia sat in the drivers seat and reached over to the glove box. Inside was a black leather glove and inside she found a note that simply read ‘GO HOME’.

Can’t wait for the next episode? Check out our preview of The Widow 1×02 Green Lion.

The second episode of The Widow airs Tuesday 9th April on ITV at 9pm.