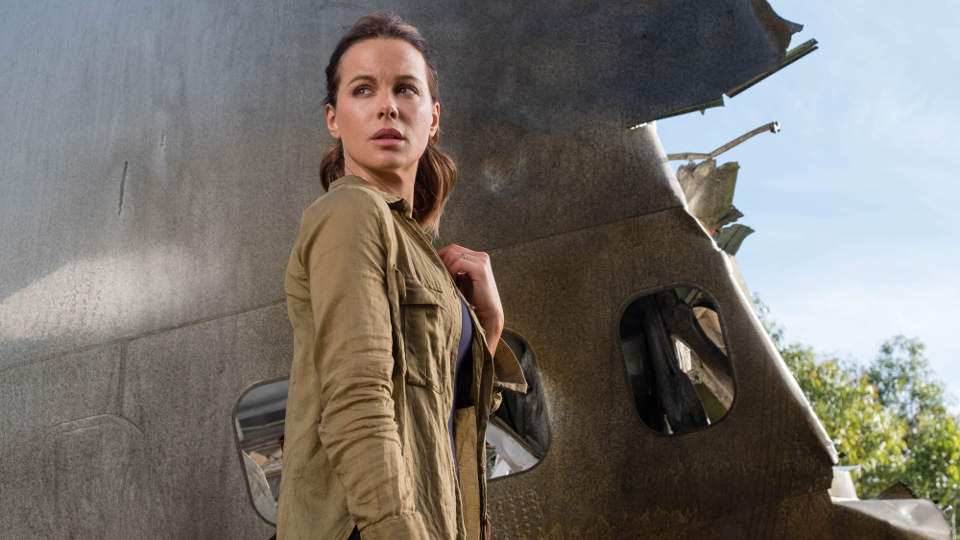 Tomorrow, 8th April, sees the UK premiere of The Widow starring Kate Beckinsale in the titular role. The 8-part series will air two episodes per week (Monday and Tuesday) on ITV in the 9pm slot. The show was released on Amazon Prime Video in the US on 1st March so beware of spoilers.

If you like to avoid spoilers we suggest you don’t read any further.

The Widow tells the story of Georgia Wells (Kate Beckinsale) who has her life turned upside-down with a phone-call in the middle of the night. Her husband of over 10 years, Will, has been reported dead after a plane crash in the Congolese jungle.

Three years later, with her old life now a thing of the past, Georgia learns something shocking. Something that will take her to Kinshasa in the Democratic Republic of the Congo, looking to uncover the truth about his disappearance.

Oblivious to the extent of the danger she faces, Georgia sets out across the country in pursuit of Will, while Martin Benson (Charles Dance), the closest person to family Georgia has, searches for answers elsewhere.

Watch the official trailer for The Widow below:

Meet the cast and characters

Georgia Wells has lived through the highest peaks and the lowest troughs life has to offer. Since the shocking death of the love of her life Will in a plane crash three years ago, Georgia withdrew from the outside world to the seclusion of rural Wales, away from civilisation and the comforts of 21st-century living. This is where we meet her at the beginning of the series. Yet beneath her grief-stricken, vulnerable shell, Georgia hasn’t lost her innate resilience, relentless determination and fierce loyalty. These qualities will come into play when a chance sighting brings her out to the Congo to find the man she loves.

Headstrong yet enigmatic, Judith Gray has lived in Kinshasa, the Congo’s frenetic capital, for nearly a decade. Unmarried, she devotes herself entirely to her work, a clean water charity. Its success can be attributed to the deep-rooted connections she worked hard to forge in the country. As Will’s erstwhile business partner, Judith offers her home as a safe-haven to Georgia when she first arrives in Kinshasa, though their conflicting beliefs of whether Will is still alive will put their alliance to the test.

Martin Benson is a man driven by reason and fact, which is no surprise given his esteemed career in military intelligence. Now retired, he has long been a devoted godfather to Georgia, but their relationship has become estranged since tragedy struck. In the journey to find out whether Will is still alive, Martin’s dry wit and circumspection will prove a necessary antidote to Georgia’s unstoppable – and at times reckless – determination.

A charming jack-of-all trades, Will Mason first came to the Congo five years previously, when he was hired by Judith. His affable character made him a valuable ally in Judith’s ambition to expand her clean water charity and they worked there together for two years. However, when the domestic flight he was aboard crashed into the Congolese rainforest, Georgia was left a widow. Now, the possibility that Will may after all still be alive will lead those who were close to him to question if they ever really knew him at all.

Quietly brave, with a maturity beyond her years, Adidja is no normal twelve-year-old child. Having been cruelly torn from her home by a Mai-Mai militia, she was forced to use all her intelligence to survive her new captive lifestyle, moving guerrilla-style through thick Congolese forests and learning to master an AK47. But despite being denied crucial childhood years, Adidja hasn’t lost her optimism, and her hope that she will be reunited with her family has never waned.

In equal parts charismatic and corrupted, Pieter Bello, formerly of the South African infantry, moved to the Congo under a cloud of disgrace. Driven by greed and bolstered by his own temerity, Pieter is a dangerous player in the pervasive world of outsiders to the Congo, who are all too ready to reap the benefits of the country’s mineral wealth and lawlessness. Having quietly built connections to a Mai-Mai militia, he’ll go to extreme and violent lengths to stop these profitable ties from being broken.

Emmanuel Kazadi is a journalist with a deep sense of justice. He loves his country, but is frustrated by the corruption that pervades. When he and Georgia met under the cruellest of circumstances years earlier, they formed an unlikely bond; their shared pain bound them together, despite their lives being worlds apart. Emmanuel’s unwavering loyalty will prove indispensable in Georgia, as she makes her first tentative steps in her journey to find Will.

Ariel Helgason lives in a world of darkness ever since he lost his sight in a plane crash, three years earlier. Despite this, the once God-fearing Ariel hasn’t lost his propensity for hope. At the beginning of the series, he travels to be part of an experimental scientific trial, taking place in Rotterdam. There, Ariel finds human connection and a chance to atone for his sins. But in his search for sight, Ariel will have to face the ghosts of his past, and soon finds himself being drawn back to the last place he ever wanted to go again – the Congo.

A calculating player in a ruthless game, Azikiwe is an elusive character. With a web of loyal servants reaching far across the vast country, he has serious status in the Congo. However, while his power is long-held, ever since Azikiwe’s mind became unhinged, the lengths this disturbed despot will go to in order to hold onto that power have escalated from dangerous to deadly.

Read our preview of The Widow 1×01 Mr Tequila, where you can watch a clip from the episode.