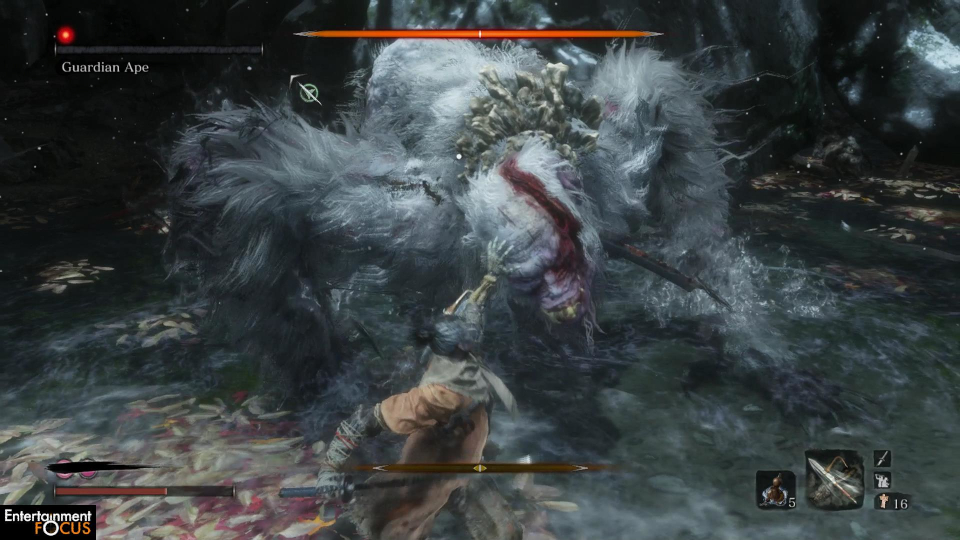 The Guardian Ape is an unskippable boss in Sekiro: Shadows Die Twice and boy is he one angry monkey. You’ll find him in the Sunken Valley just after the Bodhisattva Valley Idol. He is fast and super aggressive with varied attacks and two stages.

His attacks range from flailing arms, an unblockable grab attack, poisonous farts and turds the size of boulders that he throws at you with glee, well furious anger. I was wondering about why he’s so mad and I can only presume it’s because I’d just slaughtered close to fifty other monkeys just to get to him, that would probably piss me off too if I was a highly strung shit throwing ape.

I spent many an hour trying this boss before I got to grips with a way to take him down. I found that the turd throwing was the key to success, at least for the first stage. Now this tactic is pretty slow but it allows you to get through the first stage without taking any damage if you get your timings right. It requires patience and needs you not to be too greedy when you get your hits in, remember surviving is the key, not taking him down quickly.

As I mentioned the turd throwing is your opportunity to safely get in close to deliver some blows. To trigger his attack you need to keep your distance. If you’re too close he’ll charge you and if too far away he’ll aim to get close, it takes a bit of practice but pretty soon you’ll have the distance down. In the video below you can see the fight in action to get a clearer idea.

As soon as the animation starts for the turd throw, he squats and reaches around his back to grab said turd, you want to sprint towards him so that the turd goes over your head and so does he as he leaps to throw it. Once behind him you can get close and land 2 or 3 attacks. Sometimes your attacks will stun him and you can get a few more hits in but don’t be greedy. I recommend getting in your three hits then getting out of there. Now you just need to repeat the process over and over until you get his health down enough to deliver your deathblow. You could also use firecrackers after your first two hits to do more damage but make sure you save enough spirit emblems for the send phase.

It’s not time to relax though as there is now a second phase, use the brief respite to heal up if needed. The now headless ape will now use the sword that was buried in his neck to fight you with. He does standard attacks plus an unblockable thrust, he also does a yell attack that causes terror if you get caught in the blast.

The key here is to get him to use his normal attacks. They are pretty slow and easy to read and counter. Once you’ve parried three attacks he should rear into the air for a final blow, this can also be parried and then he will be stunned for a few seconds in front of you, this is your chance to do some damage. Use your loaded spear at this point and aim for the hole in his neck, make sure you use the drag option and you’ll rip out a centipede that is living inside him for extra posture damage.

More often than not he will do his terror shout thing after this so make sure you get clear and use this time to heal. Gaining this distance will usually make him go into his sword attack so it’s just a case of repeating the process. He is also vulnerable after his thrust attack but I was rubbish at taking advantage of this.

You can see the fight in all its poo throwing glory below: