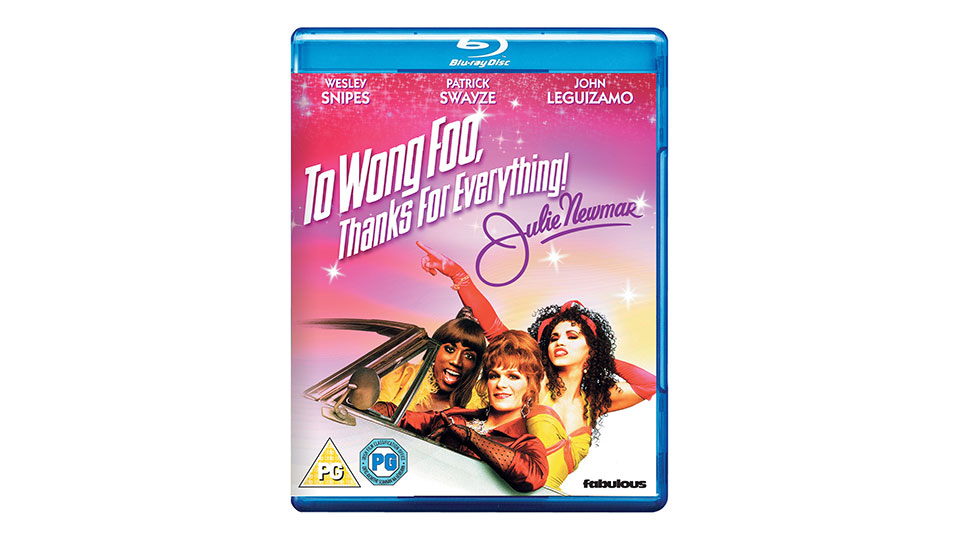 To Wong Foo Thanks For Everything Julie Newar, produced by Steven Spielberg, is being released on Blu-ray. with all new extensive restoration, for the first time by Fabulous Films on Monday 8th April 2019.

The film was nominated for 2 Golden Globes and stars Wesley Snipes, Patrick Swayze and John Leguizamo as Noxeema, Vida and Chi-Chi en route from New York to Hollywood for a drag queen beauty pageant.

Julie Newmar only makes a cameo appearance in the film. She was Catwoman in the television series Batman (1966-1967). Newmar also appeared in the music video for George Michael’s 1992 single “Too Funky”.

The title of the movie came from an autographed picture of Newmar that writer Douglas Carter Beane saw on the wall of a Times Square Chinese restaurant called The China Bowl, in the mid 1980s. Wong Foo was the head bartender at the restaurant.

Travelling across America to a drag queen beauty pageant, Noxeema, Vida and Chi-Chi are forced to make an unwelcome detour! Stranded in the tiny Midwest town of Snydersville, the three make the best of an unfortunate situation. Their glitz and glamour shake-up the sleepy locals and the stage is set for an outrageously funny weekend of flamboyant fun and unrefined simpleness.

To celebrate the release of To Wong Foo Thanks For Everything Julie Newmar, we have 3 copies on Blu-ray to give away. Enter below for a chance to win…

In this article:Fabulous Films, To Wong Foo Thanks For Everything Julie Newmar