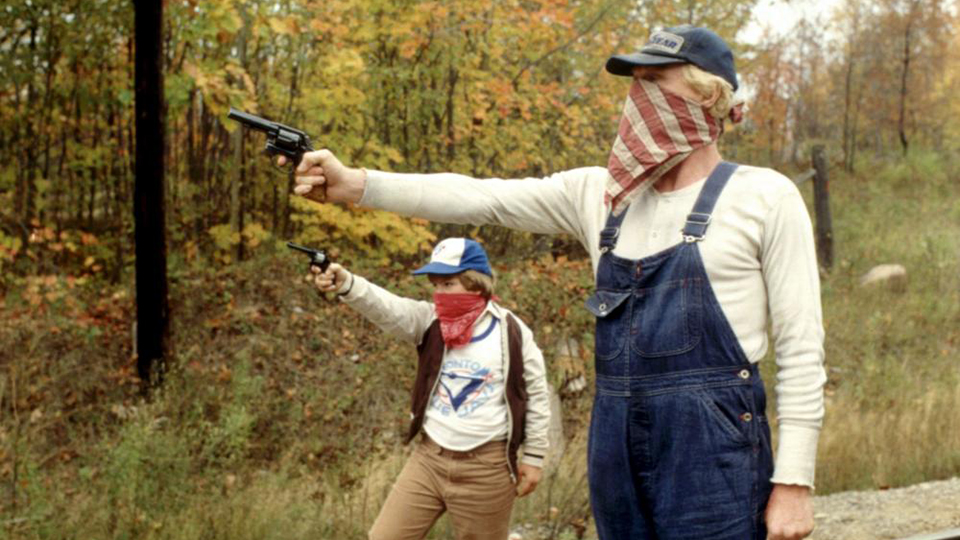 Richard Harris stars as Martin Steckert, a convicted violent criminal who has been refused parole. Martin’s Day follows his adventure as he finds a way of breaking out of prison and going on the run, kidnapping a child to escape from the police.

Understandably, the young boy, also called Martin, is at first terrified, having been held at gunpoint and threatened by Martin. But he soon finds that being kidnapped has its compensations, as his new custodian offers him the thrills and adventure of high-speed car chases, candy when he wants it, and a respite from his strict and neglectful home life. Finally, the two Martins find something neither of them at first expected, which is a firm friendship.

Martin’s Day is quite an unusual film, and was one of the last works directed by Alan Gibson, who worked mostly on high-profile television programmes before his premature death in 1987.

Released in 1985, Martin’s Day has the feel of a TV movie, though the extensive location filming in the beautiful yet rugged and rural Ontario adds an extra dimension. There aren’t many titles that successfully flip between the sinister and the sentimental, and the fact that Martin’s Day carries you with it throughout the story is credit to writers Allan Scott (Don’t Look Now) and Chris Bryant.

Understandably, Richard Harris steals the show. He is perfectly cast as Steckert. When he punches the prison wall until his knuckles bleed when denied parole, and holds a shard of glass to a guard’s neck, you believe he’s psychotic. Equally, his charming Irishman guise is entirely credible. When he teaches the kid to drive and organises a train heist so he can fulfil a fantasy, it all seems in character and lends the film a heartwarming, rather whimsical quality. It helps that the child Martin (Justin Henry) is a good actor – in fact he was the youngest ever Oscar-nominee for his performance in Kramer Vs Kramer in 1977. There is solid support from the always-dependable James Coburn and Karen Black, whilst Lindsay Wagner makes the most of her role as the psychologist with a soft spot for Steckert.

Martin’s Day isn’t a flawless production. The biggest issue is that great actors like James Coburn and Lindsay Wagner are for most of the duration sedentary inside a police station, going over the same questions as they attempt to track down Steckert. It would have been more involving to have had them embedded into the main plot. There is also a large suspension of disbelief required to go along with Steckert’s prison break: where does he get the flammable liquid from, and how does he almost immediately make a full recovery from serious burn injuries?

The hokeyness aside, Martin’s Day succeeds where it matters – in delivering a fun picture with a solid emotional heart. There is an element of creepiness about a buddy movie that no sane parent could ever endorse (the 15 certificate reflects the awkward way the movie is pitched – is should have been a PG with broader appeal to older children), and unnecessary child nudity that’s an uncomfortable watch in modern times, but if you find yourself lost in the escapism, Martin’s Day is a lot of fun. Richard Harris fans can enjoy another terrific and memorable performance from the great man.

There are no extras included on the release, but the sound and picture quality are good for DVD.