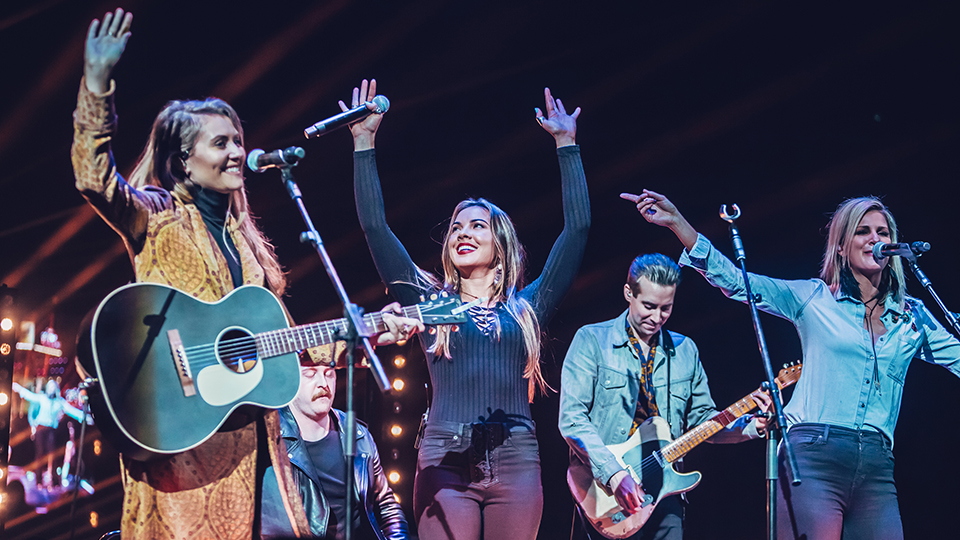 Runaway June – made up of band members Naomi, Hannah and Jennifer – are not only one of the hottest names in Nashville right now, but they’re also history makers.

Known for their outstanding harmonies, the band became the first female trio to score a top 25 single in over a decade with their 2016 song, Lipstick. Since then they’ve replicated that feat with current single Buy My Own Drinks, which is currently top 25 and climbing. They’ve also been nominated for the ACM Award for Best New Vocal Group and opened for the likes of Garth Brooks, Jon Pardi and Justin Moore, and are about to head out on tour with Carrie Underwood this summer.

Ahead of their C2C performances, I sat down with Hannah and Jennifer from the band to talk about what they’ve learnt from touring, their songwriting process and plans for new music.

How are you finding London so far?

Jennifer: Oh my gosh, we love it. We love it here. Every time we come here we’re just so excited and love all the history. It’s really got a cool feel.

You made your international debut at C2C last week – can you tell us a bit more about what people can expect from your live shows?

J: Oh my gosh! Well, a lot of fun and some country music. We’re gonna play our new single, Buy My Own Drinks – we’re really excited about that. We just hit top 25 on the charts in the States, so really exciting time for us.

Are there any songs you’re particularly looking forward to playing live?

What was the reaction from the UK fans like when you announced you were coming over here?

J: Oh, we got so many tweets and on Instagram people were excited and we were like, ‘What?! People even know who we are?!’

Can you tell us a bit more about Buy My Own Drinks – both the song itself and the new video?

H: Yeah, the song was so fun to write. We wrote that with Josh Kerr and Hillary Lindsay, and we had never written with Hillary before as a band, so that was really exciting in itself. She’s just the queen of Nashville and has just written every hit ever. So just to get in the room we were so excited. And that write was really easy, it just really flowed, and a week later we premiered that song live just because we loved it and we thought it was fun so we were like, ‘we’re just gonna give it a try’. And the fans reacted so well to it that it just kind of went on the fast track of becoming the single. So that’s been a really fun ride because it just felt like it started going on its own. So that’s been really fun.

And then the video we just put out last week, which was so fun. We had the cutest little girls in the world that were little mini-Junes. I didn’t realise what a stereotype we all were because they came in and just immediately picked up on our little quirks and we were like, ‘oh, they’ve cracked the code!’ So they were so, so amazing.

You made history when Lipstick went top 25. Does it feel like quite an exciting time for women in country music right now – almost like the tide is turning?

J: Yeah. I mean, there are so many great female artists out there and luckily we’re able to be putting out music right now. With Lipstick going top 25 and now Buy My Own Drinks just hit top 25, we feel like we’re getting past it, so it’s a really good feeling. We’re gonna break our own record! [laughs]

H: Yeah, you always wanna beat what you’ve done before and grow and move forward. We’ve been waiting to hit 25 with this one because that’s where we got with Lipstick, so hopefully this’ll be our highest charting single which’ll be exciting.

Do you have a typical approach to your songwriting?

J: It varies. We don’t really have one. On the road we’re always writing down ideas and if someone says something like, ‘oh that’s a great song title’, usually we save it and bring it home to Nashville in our writing session. Maybe an idea sparks a song or maybe somebody has a melody or we’re going through something – breakups have seemed to be a theme…

H: Those are helpful…

H: Having three girls that are all experiencing different stages of life, it’s pretty easy for us to find something to write about, because we’re all three going through different stages.

Do you ever get writer’s block? How do you deal with that?

H: For sure. I think being on the road is really hard. It’s a totally different side of your brain, and so when you’re performing and putting on a live show you’re putting out so much physical energy. And then when you’re in a write you have to be introspective and it’s a totally different side. So sometimes you’re so focused on the one zone that then we have one day back at home to write and it’s hard to turn off the road zone and focus down if you only have one day to do it. So it can be hard.

You’re going on tour with Carrie Underwood this summer – what was your reaction when you found out?

H: It’s like this mythical thing that we just talk about but hasn’t really happened, so it just still feels surreal. We’re like, ‘is that real?!’ But in real life we will be doing that, we still haven’t let it sink in.

J: We’re really excited though. She’s been so great to us. She’s just a lovely person and so supportive of new artists, and she’s been really a big inspiration for all of us.

What have you learnt from touring and being on the road?

H: I think our songs have changed a lot. I think when we first started we didn’t really know what our live show looked like and what our crowds were into. So our crowds over the last couple of years have actually helped us grow a lot and decide what songs we like to perform live and interact with the crowd. So that’s been really helpful with touring. And touring with different types of artists – you go out with Willie Nelson and that’s a totally different crowd than when you go out with Jon Pardi. So you learn a lot. Each crowd is so different and you somehow have to entertain them all just the same.

Do you have a favourite song that you cover? And who would you like to cover one of your songs in the future?

J: Well definitely our favourite is Fast As You [by Dwight Yoakam].

J: Yeah. We started playing it and we just have so much fun. Our band loves playing it and we started feeling like it was our own song, even though we know it’s Dwight’s. But as Hannah says that’s why we recorded it, because we just love it.

H: I think anyone that would want to collaborate with us – we have all these fantasy lists of Dolly Parton, maybe doing something with her. Or we love Keith Urban and that’s such a different side of things. We have a big list of fantasy artists. Like even Dwight, if we could do something with him that would be awesome. But any time someone wants to cover one of our songs or collaborate we’d be excited.

Who have been your biggest inspirations and influences?

J: We all have the same ones and different ones. I grew up loving Garth Brooks and Lee Ann Womack, and together as a band we’ve loved the Dixie Chicks, all of us.

J: And you’ve got a Sheryl Crowe influence as well.

H: Yeah, I came from alt-rock which was my gateway into country, because now I think things are so blended it’s all in the same world. I think that’s what gives us a little bit of a different flavour, because we do have three people with very different musical backgrounds. But we all grew up loving Faith and Shania – they were just the queens of the world in the 90s.

H: Yeah, we’ve got an Australia tour coming up, and we know they love country music there. I think this next year with Carrie we’re going to get to do a lot of bigger rooms that we’ve wanted to do. Both of us are from California and we’re going to get to play the Staples Center, which is something that growing up that’s where you go see concerts. So things like that are going to be this kind of bucket list items, so we have a few coming up that are exciting.

J: Going out with Keith Urban one day…

H: Yeah, that would be cool.

You’re currently working on your debut album – can you give us any hints about what that’s going to be like?

H: Yeah, it’s a cool project for us because we’ve evolved so much. We’ve changed producers and there’s just been a lot of growth. I think we’re also excited to see how, at the end of the day, which songs get chosen and how it gets packaged up. But we have Dan Huff working on it so we know he’s gonna put his magic touch on it. He just has this great way of just knowing exactly what the song needs. So we’re putting a lot of trust in him and doing a lot of songs that we’ve written and some outside songs that we just fell in love with. So we’ll see, but we’re getting really close.

J: I know mine – Garth Brooks, The Dance. I just think that was so well-written and I love that song.

H: I’ll go the other route and say the Friends theme song.

H: Yeah, sitting pretty for decades now. So just that one song, you never have to do it again.

What does the rest of 2019 look like for you? Are the album and the Carrie tour your main focus at the moment?

J: Yeah, so we go out with Carrie for two months and then we’ll have two months in between the second and first leg, and we’re playing a ton of fairs and festivals.

H: The ACMs coming up…

J: Yeah, we got nominated this year so that was really exciting. We’ll see how it goes [laughs].

Was it a surprise to find you’d been nominated?

H: It really is the truth that it’s just an honour to be nominated, but it’s so true. Because you just dream and dream and there’s so many unknowns. When you’re a kid and you watch those awards shows it’s like, ‘how do you get up there?’ And to even be recognised at all and be in the running just makes it feel like, ‘oh, OK, we’re really doing it, people are noticing what we’re doing’. Obviously winning would be amazing but I think just being nominated is wild. We got nominated for the first time last year and being able to walk the carpet and do the whole thing was the first time for us, so we’re really excited.

Do you have any plans to come back to the UK?

H: Yeah, we don’t have anything now just because we have the Carrie tour, but maybe November [laughs].

Advertisement. Scroll to continue reading.
In this article:Runaway June