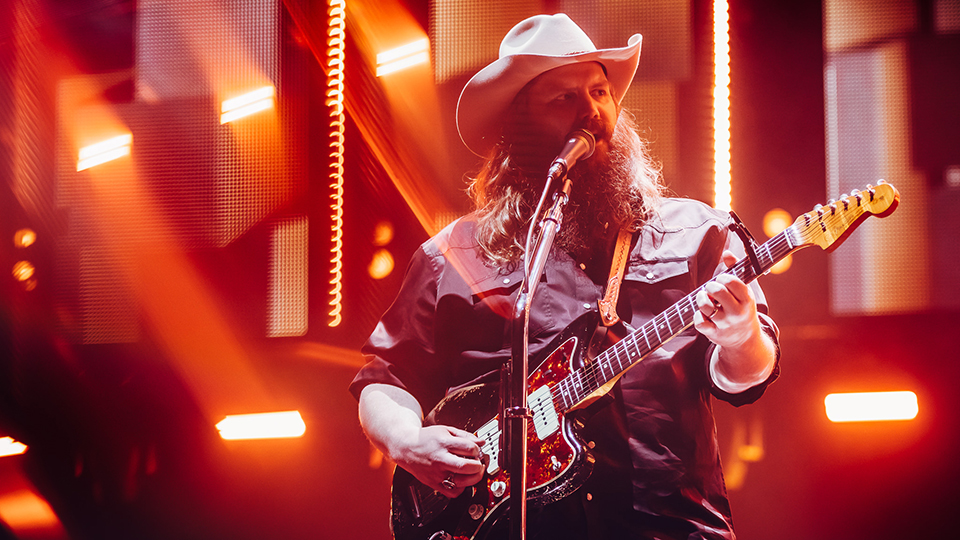 It’s been three years since Chris Stapleton made his C2C: Country to Country debut and blew everyone else out of the water. The enigmatic musician was second on the Main Stage and he overshadowed everyone else that came after him. Last year it was rumoured that Stapleton was going to headline but rumour has it that his wife’s due date clashed and he had to pull out. One year on Stapleton returned to the UK as a C2C headliner and his wife Morgane, who is heavily pregnant, was right by his side.

Expectation for Stapleton was incredibly high to the point where I wondered if he could get anywhere near the bar he set back in 2016. As the first song of the night, Midnight Train to Memphis, got under way it was clear there was no need to have been apprehensive. Stapleton didn’t meet the bar he set last time round, he smashed straight through it and carried on going. His voice is so incredibly powerful, full of experience and alarmingly emotive. You feel everything he’s singing about whether you can relate to his lyrics or not. That is an incredibly rare gift.

The set list spanned Stapleton’s three albums – Traveller and From a Room Volumes 1 and 2 – and it was hit after hit after hit. The raucous Nobody to Blame had the audience on their feet dancing and singing, Hard Livin’ had an urgent feel driven by a stomping beat, and the powerful Fire Away soared to new heights inside The O2 Arena. Might As Well Get Stoned moved things into a more chilled direction before the raw emotion of Nobody’s Lonely Tonight left me with my jaw on the floor.

That’s pretty much where my jaw stayed for the rest of the set. Acoustic performances of Whiskey and You and Either Way brought tears to my eyes. I felt choked up by the end and I know for a fact I wasn’t the only one who felt that way. There’s something so special and magnetic about Stapleton. He draws you in, mesmerises you and holds you there until he leaves the stage.

More of You saw Morgane return to the stage. The gorgeous song was taken to new heights thanks to the chemistry Stapleton and his wife have. When they harmonise, they don’t take their eyes off one another. It feels like you’re privy to a very personal and intimate connection, and it’s incredibly powerful. At times it’s like they feel they’re the only people in the room.

Elsewhere in the set Broken Halos was a standout moment, Second One to Know rocked the arena after a false start that saw Stapleton retune his guitar and restart the song, and Traveller got the audience singing once again. Tennessee Whiskey served as a band introduction with Stapleton singing about his two band mates and of course Morgane before he launched into the classic track.

For his encore, Stapleton returned with Sometimes I Cry. I didn’t think the night could continue to get better but somehow it did. Stapleton’s vocal runs are off the charts. He sounds effortless as he jumps around the scales, pouring out his soulful bluesy tone. It was another moving moment and when he finished the song I felt emotionally spent but incredibly satisfied.

Of the three headline sets this weekend Stapleton was the best. Keith Urban and Lady Antebellum were both incredible sets but the rawness of Stapleton’s performance accompanied by the no-frills approach that put all the focus on him and his band was something truly special to witness. To be able to do what he did last night in a packed arena is no easy thing and it’s a night that will go down in C2C history as one of the most special performances the festival has ever seen.