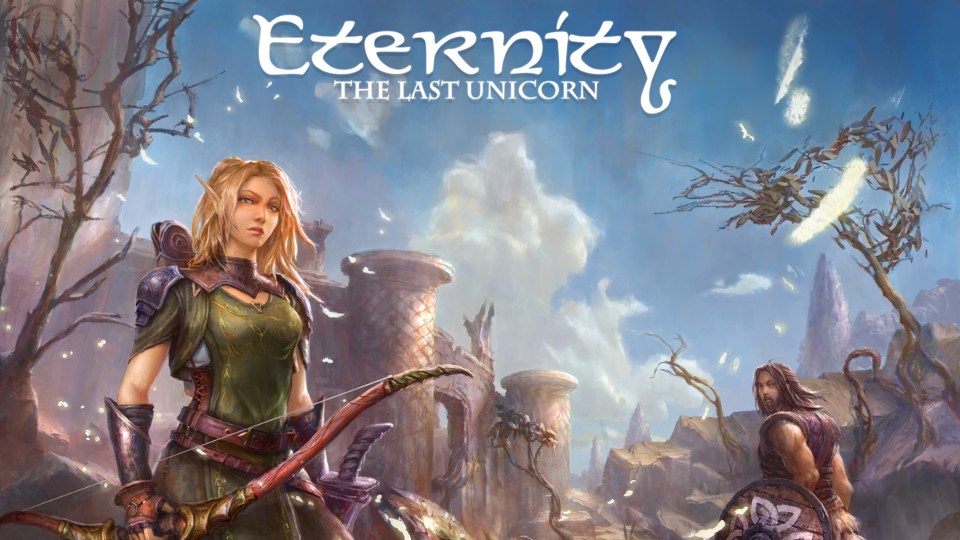 Built with the Unreal Engine, developers Void Studios brings us an RPG adventure with a mythological twist. As a pureblood elf, Aurehen, your quest is to find and free the last unicorn to preserve Elven mortality, taking you through various fantasy locations with an echo of Dark Souls ringing in the background. Play as two different characters and traverse the dangers that await ye–Eternity: The Last Unicorn will take you on a grand adventure without ever leaving your seat.

Norse mythology is the lifeblood of Eternity: The Last Unicorn’s storyline. Plenty of power tales surrounding various Gods and legends to go along with it, Eternity is a full fledged, immersive fantasy, littered with runes, that aims to really pull you into it’s world. A massive plus in the soundtrack, ethereal sounds fill the air, really taking you to that far away land, and bringing you back in for confrontation when you come across it.

Fixed camera positions, reminiscent of classic survival horror games, draw you to focus on your environment, gently nudging you to take a closer look and interact with the things you see. It can be a bit of a hassle at times–with current games usually giving the choice of controlling the camera. Missing paths that are hidden by the camera is a very real risk you run; but I must admit, in Eternity: The Last Unicorn, this type of camera grows on you quite quickly with the controls of the character’s movement being done very fluidly. In other words, it’s not really a chore moving around and exploring those paths you might have missed.

The combat has all the elements that it’s meant to: you have a camera lock on to the enemies, which allows you to cycle through and prioritise your foes, a basic hack and slash attack that seems to be very capable and a finishing move to execute if you’re so lucky to see that prompt come up during the fight. Let’s not forget a handy power move thrown in there too for good measure–all these adding up to be the tools you need to vanquish any unfortunate soul that dare cross your path. However, the animations that are coupled with these actions can seem very basic, even though they do translate on screen. Enemy spawning points can feel a bit strange at times too, and paired with the fixed camera angle, you can find yourself in situations where you’re thrown a cheap shot every now and again.

Enemy designs are on the whole, very uniquely done and interesting to look at. A catalog of fantasy creatures made out of twisted shapes of reality, you’ll find interesting marriages of things you recognise put together to make sort of a Franken-creature. They do come with a fair amount of attacks too that really drive home how threatening one should see them; when I see an enemy that vaguely represents something like a hermit crab, I want to run up to it and say hello…that is until it curls up into a ball and throws itself at me with juggernaut force!

View some Eternity: The Last Unicorn screenshots in our gallery:

There’s a few things that need a bit of work for Eternity: The Last Unicorn to really polish itself to a shine. Interacting with certain objects like chests and pots can be tightened up a bit. When you swing to hit a pot, it just sort of sadly collapses into a heap of broken pieces, not really giving you the satisfaction that Legend of Zelda would hand you on a platter. As mentioned before, the combat animations would really be a treat to watch and feel that much better to perform if the landing impact of your weapon was a bit more brutally done. This would eliminate the feeling of just going through the motions, so to speak, and really give it a spark of life.

Eternity: The Last Unicorn is a fun game to play on the whole, but doesn’t really have any addicting qualities to it, unless you’re a mythology enthusiast. It does need a bit of polish around the corners to make it a title worth throwing yourself into for hours on end, and quite honestly if that were to happen I could really see myself enjoying it on a level that one might parallel with Fable. Still, I recommend taking a good look at Eternity, especially if you enjoy fantasy titles and any of the games I referenced in this review (Dark Souls, Fable, and a light smattering of camera angles from original Resident Evils)–you might find it the adventure you were looking for!

Eternity: The Last Unicorn was reviewed using a digital code supplied by the publisher.