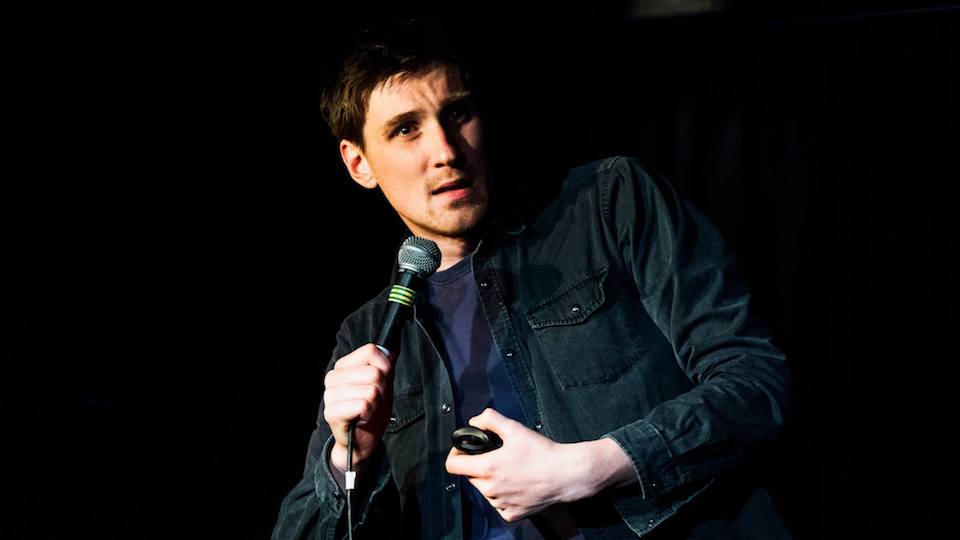 The human race is at a crossroads: on one path lies the future, with its twitchy technology and mega-corporations who know us better than we know ourselves; on the other lies the past and all the baggage that entails. And in the middle stands Sean McLoughlin, an unlikely everyman, trying to plot a course for both himself and mankind. Now 30, all Sean wants is to walk into the sunset with the love of his life and his head held high, but before that there’s some demons he wants to put to rest.

Entertainment Focus were able to catch up with Sean earlier this week to chat about faith, failure and being funny…

You’re kicking off your tour at the Soho Theatre this weekend. Tell me a little bit about Hail Mary, this is your sixth Edinburgh Fringe show?

It’s gone well, it’s definitely the Fringe show that did the best. I’m a traditional stand up,  I don’t have any props or anything like that. I mainly talk about my life and, in that year, I turned 30 and fell in love. The show’s looking at technology and religion as well, that’s why it’s called Hail Mary, I talk a lot about being raised Catholic.

Is it correct that you were lapsed but you’ve rediscovered your faith somewhat?

It’s fair to say that my mind is more open than it was a year ago. I talk a bit about it, I deliberately keep it vague because I don’t really know. I don’t want to come down on one side or not. I think the Catholic Church gets a lot of crap. A lot of it is really deserved. But a lot of my upbringing was good, I learned a lot of good things from having a Catholic background. I suppose maybe it was different, my mum sang in the choir and the priest we had was genuinely a nice man. It’s probably different from what other people have experienced. People think that I’m defending it, and I don’t think I am defending it, a lot of it is indefensible.

I think the Catholic Church gets an unfair amount of flack. It’s the one religion that everyone is allowed to attack. On prime time television, too, which I don’t think they’d get away with if it was other religions. I don’t really mind but it doesn’t sit that well with me any more… I talk about it in the show in quite a light way.

Is this your first extended tour on the road?

This is definitely the first proper tour going to a lot of places in a short space of time. I’m really excited about it, I still love doing the show. I still love telling all those jokes. I can’t wait to go out and do it again. I feel so lucky as I had a list of about 15 places that I wanted to go and I ended up being able to go to all of them. So if it ends up being a disaster then it’s totally my fault.

Sean you’re 30 now, when was it you got into stand-up?

It was a while ago, when I was at university, I would have been about 19 or 20 when I did my first open mic. I started doing stand up because I didn’t really know what I wanted to do. I wanted to do something. I did a few open mics and I did enough that it got into my bones a little bit. I graduated with a third class degree in a subject that I could not care less about. It was English Language. It was such a technical degree, all about linguistics, very scientific. I was absolutely the dumbest person on the course. In general education never suited me but it did at least acclimatise me to failure and feeling useless. I do think you need that when you go into a career in show business.

Did you go to a faith school?

Yeah, it was a Catholic school. A comprehensive but it was Catholic. I was lucky really as it was a pretty decent state school, I feel lucky that I was raised under Labour so all this money was put into public education before the Tories got in…It was only when I left that I realised how odd it was that I’d been to a religious school. I only realised that everyone wasn’t Catholic when I went to university. I assumed that everyone had read the bible! … I always feel weird talking about Catholic stuff, you never know how it’s going to come across. If you do it in the right way, hopefully people know I’m on the good side.

It’s prime material for you to go back into your own experience and re-visit. Did you have any particular comedians that made you want to aspire to be a stand up?

I’d always really loved comedy. As a kid I was really obsessed with Harry Enfield and Mike Myers. Big outlandish characters. I thought I could do stand up while I waited to do that kind of thing… I didn’t have anything going on in my life in my early 20s. I was low on confidence, I didn’t have a girlfriend, I didn’t have any money. Stand up gave me some sort of purpose. In a way I’d have got further a lot quicker if I’d had more confidence. I just really wanted to do something creative. It felt for a very long time that it wasn’t going to happen. I can’t overstate how much of a loser I was until about the age of 28. I look back and think ‘Of course I was a failure!’ I looked like death. I didn’t know how to look after myself. I had a haircut so bad it should have been illegal and I was uncomfortable in my own skin. There’s very few people with those attributes who have lots of success.

So you put all that into your on stage persona, then?

I’m more manic, angsty and aggressive on stage than I am off stage. Stand up was a way for me to finally open up my mind and let people know how rough I was feeling inside. But it’s turned around, I can’t complain.

People say stand up’s like therapy, would you say you treated it more like a Confessional box?

That’s a great piece of interviewing! When I started, I didn’t really feel like I had a personal life. I opened up to an audience, it wasn’t like I had anyone else I could talk to about it. Now I’m in a position where I’m getting married, I’ve good friends around me. I’ve no desire to talk about myself on stage any more. Before, I had nothing to lose! I’ve gone from a sad comedian to a happy comedian. I think my comedy’s much better as a result of making that shift.

That’s interesting because some people would perhaps think that the more miserable you are the funnier your cynical outlook on the world may be.

Yeah, people did say that to me. I think I was too willing to believe in ‘the tortured artist’. Actually, I look back and think I was sort of trapped in it. That trapped my mind. Whereas now I feel I can talk about anything.

Sean is appearing at London’s Soho Theatre on Saturday 2nd March and then touring across the UK until May. For a full list of tour dates and tickets to see Sean’s show – Hail Mary – visit seanmcloughlincomedy.com