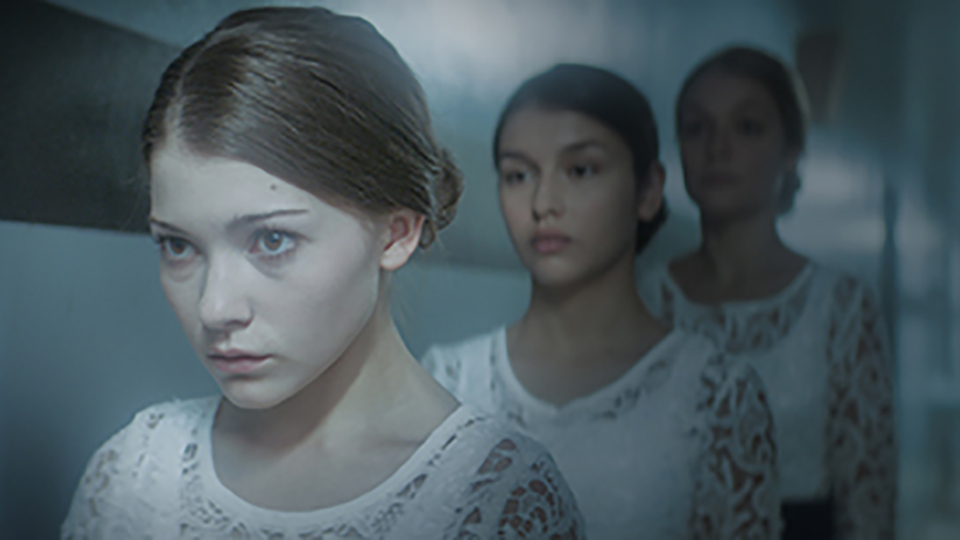 16-year-old Vivien (Katie Douglas) is among a group of girls trapped in The Vestalis Academy. The strict boarding school requires its girls to adhere to a number of rules under the watchful eye of Miss Brixil (Sara Canning) until they are ready for adoption by a high society family. When Vivien moves to up the sixteenth, and final, level she is reunited with Sophia (Celina Martin), a former friend that betrayed her years earlier. As Vivien tries her best to follow the rules, Sophia reveals some surprising secrets about the academy and the girls have to work together to fight for their freedom.

Level 16 is a sci-fi horror film from writer/director Danishka Esterhazy that keeps you guessing until its horrifying conclusion. The film takes the viewer straight into the story and it reveals its hand slowly, which kept me hooked throughout its running time. It’s clear from the offset that the academy isn’t the respected institution it purports to be but to the girls trapped inside it, years of being institutionalised has made them blind to their reality. As the girls go through the same routine every day, which includes taking their meds and ensuring they are clean, they don’t really question anything about their lives.

That all changes when Sophia shares her secrets with Vivien and the two girls try to find out what’s really going on. It’s a tense journey that will have you on the edge of your seat and the fear of being caught ‘unclean’ keeps both girls in a state of constant fear. There are shades of hit TV show The 100 within the film as well elements of Lost and to a lesser extent Logan’s Run. After seeing the film, you realise there are such obvious and clear clues given as the storyline progresses but they aren’t easy to recognise until you piece together what’s actually going on.

A strong central performance from Katie Douglas as Vivien is one of the film’s strengths. She’s nothing short of outstanding, giving a tour-de-force that highlights her as a young actress with a lot of potential. The 20-year-old gives a performance way beyond her years and she’s truly excellent. Sara Canning, who is perhaps best-known for her role in The Vampire Diaries, is the film’s biggest revelation. She’s positively chilling as the school mam-ish Miss Brixil and you can help but feel frightened of her every time she trots onto the screen. There’s strong support from Peter Outerbridge as the academy’s physician Dr. Miro and Celina Martin as the partially blind Sophia.

Level 16 is packed with tension and atmosphere and it’s a different kind of horror film. The horror here doesn’t come from gore and shocks, although there is a bit of both, but instead from the dark side of human behaviour. What’s perhaps the most frightening thing of all is that what happens to these girls in Level 16 doesn’t seem a far stretch from reality. Esterhazy’s taut thriller is a fantastic watch and one that will stand up to repeat viewings.

Level 16 will available on Digital HD in the UK on 27th May 2019 courtesy of Signature Entertainment.