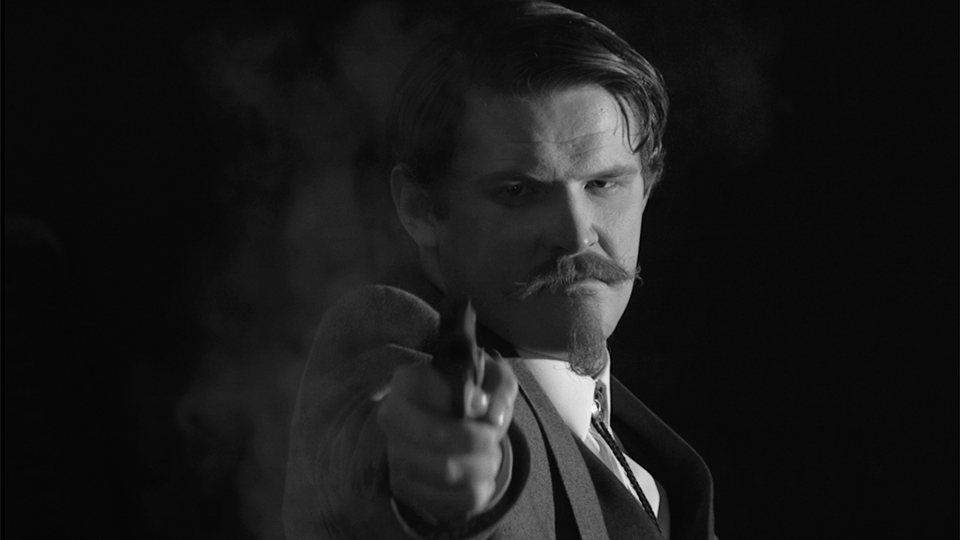 A group of friends come together for a dinner party hosted by Victor (Charlie Robb) in a dilapidated old mansion. Following the dinner, the group is told the history of the house and they are coerced into taking part in a séance led by medium Madame Bellrose (Mauren Bennett). Soon the group is thrown into the midst of chaos after accidentally opening the gates of hell and unleashing havoc.

Here Comes Hell is the directorial debut of Jack McHenry, who co-wrote the feature with Alice Sidgwick. Set in the 1930s and filmed in black-and-white, the film draws heavily on classics from the horror genre and pays loving homage to them throughout its 73-minute run time. Introducing the array of characters – Victor’s razor-sharp sister Christine (Margaret Clunie), his friend Freddie (Timothy Renouf) who brings new girlfriend Elizabeth (Jessica Webber) and Texan George (Tom Bailey) – in the first 15 minutes, Here Comes Hell is eager to throw you into the middle of the action.

It’s established that there’s a complicated dynamic among the group. Christine has been romantically involved with both Freddie and George, and none of them have met Elizabeth before. Once they partake in the séance, they are forced to join forces in spite of their personal feelings towards each other. This is when the film really kicks into action and the pace picks up significantly. There are plenty of laughs to be had as well as some decent scares.

One aspect of the film that simply has to be highlighted is the special effects. Here Comes Hell is shot on a miniscule budget but the special effects are impressive. A mix of practical effects and animation are used throughout and they looked terrific. The techniques also nicely complemented the 1930s period setting and the black-and-white look-and-feel of the film.

Margaret Clunie and Timothy Renouf are the standouts in the cast. Clunie is wonderfully edgy as Christine, often getting the best lines and snarking her way through every drink and cigarette she enjoys. Renouf, who was a highlight in last year’s F.U.B.A.R., is on top form as the impeccably turned out and well-spoken Freddie. He gets to show off his comedy skills in parts and he’s definitely got a bright future ahead. Charlie Robb slightly over hams it as Victor and Tom Bailey’s performance is derailed a little bit by his dodgy American accent.

Jessica Webber puts in a solid turn as Elizabeth and her character gets the most development out of everyone. She’s transformed from a meek and mild stranger to a potential final girl over the course of the film. Mauren Bennett is worth a mention too as the batty Madame Bellrose. Her eccentric performance adds to the crazy vibe of the film and she’s a joy to watch.

Here Comes Hell has a lot going for it. It’s an enjoyable romp that doesn’t outstay its welcome. While there may be some fine-tuning issues with the cast, McHenry shows a lot of potential with this debut. The film doesn’t take itself too seriously and it’s all the better for it. Here Comes Hell keeps a tongue firmly in its cheek and puts McHenry on the map as a film-maker to keep an eye on.