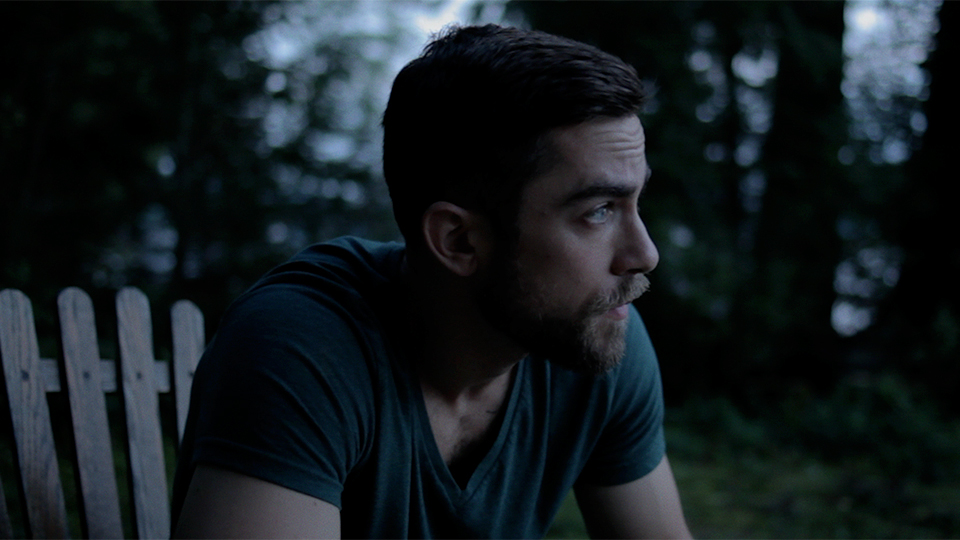 Evan Dumouchel is one of the lead stars of Perry Blackshear’s new horror movie The Rusalka, which will receive its UK Premiere at Arrow Video FrightFest Glasgow 2019 this week.

In the film Dumouchel plays Tom, a mute character who forms an intense bond with a mysterious woman during a break at a lakeside cabin. His performance is nothing short of extraordinary and it’s a real breakthrough moment for him.

I had a chat with Evan ahead of the UK Premiere to discuss the challenges of his role, talk about how The Rusalka flips convention, and to find out how he balanced being a producer with his job as an actor.

You’ve worked with The Rusalka writer/director Perry Blackshear before. How did you two come to know one another?

Perry, MacLeod who plays Al in the film and have been a filmmaking team, along with Margaret Drake, since our first film They Look Like People. Perry, MacLeod and I all went to school together and after some time doing our own things, we came back together. We found this creative partnership… creative brotherhood… when we were making They Look Like People together. When we finished that film, we all knew that we were going to go on and make something else together. When Perry was working on this, we knew that we’d work together on it.

Your performance in the film is incredible. I couldn’t believe it when I found out that you weren’t mute in real life…

I was completely convinced. Then I looked you up on YouTube and saw you speaking and I was like oh okay. You manage to convey and communicate so much without saying a single word. How challenging was that?

It was challenging I have to be honest. You have to give a lot of credit to the people that you’re playing with in that kind of situation for sure. Both Margaret and MacLeod are just incredibly generous actors and they give so much. Initially when we decided upon Tom not speaking in the role, there was some creative nervousness about how to approach it but once I turned that piece of my communication off it opened up a whole new depth and breadth of ways to listen. I felt like I could just lean in more to whatever my partners were bringing to the table and they were bringing so much. Initially I did find it challenging but after settling into it, and especially with Perry’s help working us through things, it became very freeing and it was very exciting. It opened up a whole new avenue to really lean in.

You learned a completely new way to communicate. It must have been frustrating at times not to be able to say anything…

If you come up against a fork in the road in which you can’t go a certain way you find a new way. I didn’t really find it frustrating, I sort of found it freeing in that when I knew that there was a way in which I couldn’t communicate, seventeen other things would pop into your head about how you could communicate. That was exciting. I didn’t know how that was going to affect me or that that was going to occur but you just start thinking about all the different ways that you can get this message across, and as cleanly and as simply as possible. For me it was about being direct and succinct, and also as nuanced as I could be.

I thought you were really wonderful in the film…

Thank you so much! I really appreciate that.

As you mentioned you and Margaret were friends prior to making this film and you’d worked together before. Even still the chemistry between you is intense and powerful. How did you foster that for this film?

Margaret is incredible and what I found with her in particular is she has a deep sense of earnestness and truth. From my side of it, I’m always watching her as closely as I can to see what it is she’ll be giving me. Margaret as an actor gives you so much, especially with the duality of what she’s playing and the struggle that she’s working with internally. No matter what side of that circle she’s on at any given moment in a scene, there’s always this through line of truth of this is this woman who really wants and needs kinship and to communicate. I suppose my character’s lucky because she’s chosen me to feel that kinship with and I her. There’s some Romeo and Juliet to it. The intensity of the performance between the two of us – she’s just such a close friend and you’re right, we had been friends for a while before that. We had the chance to talk about it. We would be spending time together on set, in its entirety, so it wasn’t just show up, do the scene and leave. We had the chance to foster this relationship and discuss it while we were there. I’m just very appreciative of having a team with someone as talented as her on it.

Something I said to Perry when we spoke that I liked about the film is the fact that Margaret’s character Nina wasn’t sexualised at all. It would’ve been such an easy creative choice to make her really sexualised. There are some interesting twists where Nina actually sexualises your character Evan and it turns convention on its head. What was that like for you?

It was incredible. It’s awesome that you noticed that by the way! As a creative team we wanted to flip those things on their heads. We’re bringing a myth up to the modern day and we wanted to bring some of the themes and tropes of myths and fairytales up to the modern day too. To flip the female gaze, to change the character that is not given a voice… these are things that we were conscious of and happy to play with. As a character playing that role it was invigorating. It was exciting to part of a thing like that to understand what it feels like to have that flipped.

My sympathy changed between all three characters throughout the film. I never really knew which character I sympathised with most and when I thought I did, it moved to a different character. I felt very emotionally conflicted by the end. What was it like for you to tackle such a complex character?

This comes down to the way that Perry constructs stories. It’s really important to him, and the rest of us as storytellers and filmmakers, that every character has deep wants and deep desires. When a character is fully formed and three dimensional like that, they can’t help but be complex. Then you pair them with Margaret and MacLeod playing their roles… I’m hugely impressed by their work but specifically that’s the kind stories that we want to tell because we find them more interesting. When you aren’t falling into the trap of the monster being the monster, a lot of other avenues of creativity present themselves and the scenes become richer. As you said you don’t quite know where to place your loyalties. As a storyteller and as a producer, obviously playing the role of Tom, I align myself with his desires and as a character you have to. If I step outside it I find both of the other characters wants and needs tragic because I can totally see myself with Al and Nina separately. It’s like a split brain experience because everybody is going after what they need so tirelessly even if they’re going to fail at the end of the day.

You mentioned that you’re also a producer on the film. Were there any challenges juggling dual roles?

I think so but we’ve been producing these movies together and performing in them (for a while so) I think we’ve worked out a healthy detachment. When I’m done performing and talking to the rest of the team about the story, we do shift gears to try to make the best film and story we can make. One of the ways that I do that is I start referencing the character names instead of, ‘when I did this and when this thing happened to me’. That’s helpful for me to be able to look at it as an entity as opposed to a thing that is mine because it’s not mine. It’s just a thing I was lucky enough to be a part of. When I’m looking at that as a producer, that’s how I try to feel. On the day when filming you need to fight with yourself to make sure that you’re expressing exactly what it is this character wants and needs, and if that requires debate in the team or whatever you need as an actor you’ve got to honour that too. The difficult part I suppose is the separation. One set we actually had a hat. Perry very sweetly got me a producer’s hat so even when we were on set I would flip gears. If we were working on something else or we had to do a location scout or something, to separate myself I’d throw on my producer hat and I’d go out and get something done with a different part of my brain.

It sounds like a good way to do it…

(laughs) It’s a little bit A plus B plus C but it worked well for me (laughs).

What else do you have coming up?

I can’t share too many details but the same team is working on another project coming up in the future. It’ll remain in this realm of supernatural and mystery.

The Rusalka receives its UK Premiere at Arrow Video FrightFest Glasgow 2019 at 10:45am on Saturday 2nd March 2018.

The Rusalka will be released by FrightFest Presents in May as The Siren.