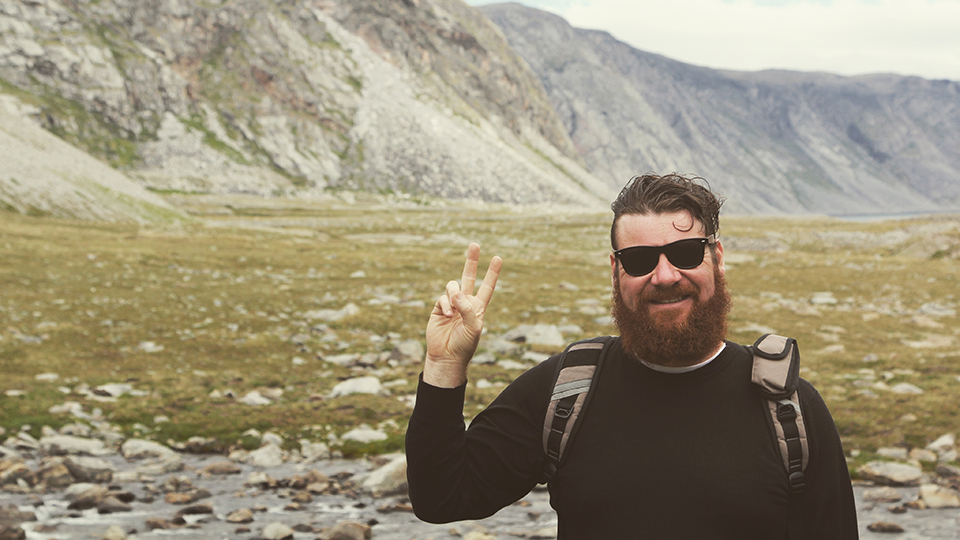 Poking gentle fun at the reality TV genre, and adding some very creative twists, The Hoard is sure to be one of the most unique films showing during the festival.

I caught up with Jesse to talk about the inspiration behind The Hoard, discuss the film’s perfect casting, and to find out what it was like to co-direct the feature.

Hi Jesse. How are you today and where does this Q&A find you?

Your film The Hoard is having its European Premiere at Arrow Video FrightFest Glasgow. What’s it all about?

The Hoard is a horror/comedy mockumentary chronicling the massive cleanup effort by a reality TV crew in the hoarder capital of America. Murph Evans is a notorious hoarder who has crammed four dilapidated homes with a bursting inventory of second-hand crap. As the team delves deep into decluttering, renovations, ghost-hunting and understanding the psychology underlying Murph’s condition, the entire project descends into a chaotic nightmare for survival.

You co-wrote the screenplay with Matt Wiele and Tony Burgess. Where did the inspiration come from?

A fascination with all the tropes of reality TV, from property revamping, to interventions, from ghost-hunting to hoarding. We have been good friends with Barry More, from Owen Sound, Ontario for many years, and have produced several horror films on his locations. He is a talented sculptor and builder, a beloved collector of antique furniture and a fascinating character all around. We were initially going to make a documentary about his life, but instead opted to make a mockumentary sprinkled with horror, and had him buy into playing the lead hoarder, Murph Evans.

You and Matt directed the film together. How does a co-directing relationship work and were there any challenges you had to overcome together?

I’ve co-directed in the past, as has Matt. The main reason for co-directing The Hoard was on one hand, we were both huge fans of comedy (perhaps as much as we love horror), and logistically there was so much coverage to get that we had to film as two main units the entire shoot. Only on a couple select days did the entire cast and crew assemble to film a scene together. But for the most part, we were working each day at different locations following different actors. This created a friendly and dynamic competition to ensure we got everything we needed, and an excitement to see what each director had achieved on any given day. It wasn’t until the edit where we got to truly see what the other co-director had filmed.

As well as writing and directing, you also feature in the film as Officer Shane Chapman. What was it like juggling so many responsibilities on this film?

That was actually serendipitous. We had hired a stuntman to play the Bylaw Officer, as he had to fall off a roof and into a gigantic dumpster. But a blizzard screwed up our schedule and the stunt guy had to go back to Toronto. I jokingly put on the Bylaw jacket in the trailer one day, and was randomly sporting a ridiculous moustache during the filming, and when I emerged out of the trailer everyone agreed that I should play the Bylaw Officer despite the fact that the wardrobe was incredibly small. Instead of the stunt, we just through a dummy dressed in the wardrobe out a window and into the dumpster.

The casting is perfect. How did you get this group of actors together and what did you do to help them build chemistry?

Barry More was always going to play the main hoarder, Murph Evans, as the character was written as a ridiculous caricature of Barry himself. The ghost-hunters and show organiser Sheila Smyth were cast from auditions. Dr. Ebe was played by our writer, Tony Burgess. And the rest of the cast was rounded out by non-actors. Mostly real life people who we asked to just play themselves, such as The Duke, Charles Ivey, etc. So it was an assortment of real people and selected actors all put together in an ensemble.

The film pokes fun at reality TV. Why do you think viewers are so hooked on the wealth of reality shows out there?

I think mainly because people can’t turn away from other people’s suffering, at least in the case of hoarding shows and intervention. But mainly because I think they are edited in such a way to make a lot of hay out of nothing, and leave people on manufactured cliffhangers going into commercial breaks.

What’s one horror film that you wish you’d written and directed and why?

I think this question is a bit odd, because I probably wouldn’t want to have directed any of my favourite horror films because I’d fuck them up! Perhaps I wish I could go back and re-write and re-direct my first two films.

We just finished a zombie film called Deadsight that I directed and edited. And for a change of pace, I recently produced an indie comedy that my wife directed which should be completed by summer.

Why should people go and see The Hoard during Arrow Video FrightFest Glasgow?

The Hoard puts everything out there and doesn’t try and pretend to be something it’s not. It’s genuinely insane, weird, and an oddly charming look at a hoarder who must face down exploitation filmmakers. It’s definitely the craziest thing I’ve ever worked on.

The Hoard receives its European Premiere at Arrow Video FrightFest Glasgow 2019 at 11.25pm on Saturday 2nd March 2018. You can watch the trailer below: