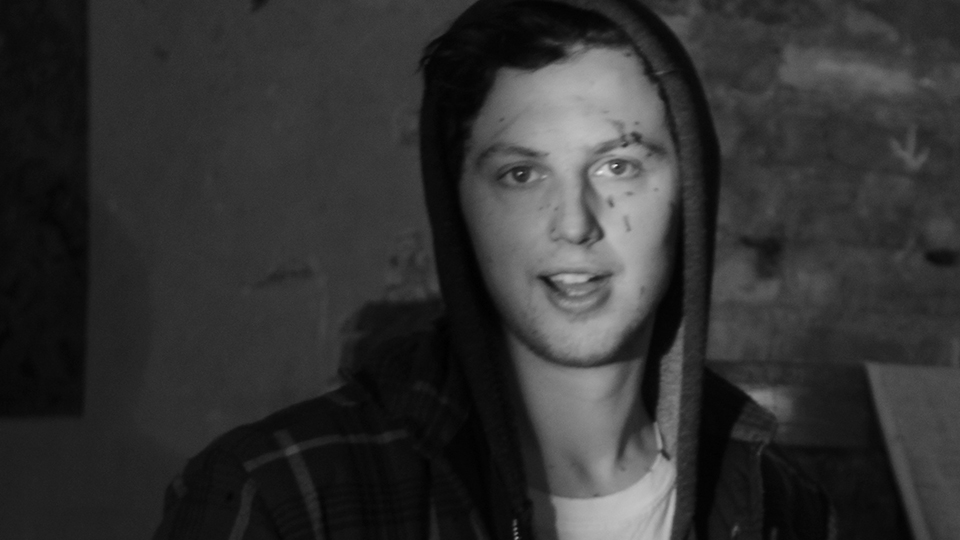 McHenry, who co-wrote the film with Alice Sidgwick, has created a black-and-white romp set in the 1930s that shows a lot of promise. He describes the film as ‘Downtown Abbey meets Evil Dead’, which gives you an indication of what to expect.

I caught up with Jack ahead of the World Premiere to find out where the inspiration for the film came from, discuss the challenges he faced while making it, and to find out how he brought the impressive special effects to life.

Hi Jack. How are you today and where does this Q&A find you?

I’m good thanks, I’m supposed to be writing but I’m really just walking around in circles drinking coffee, so this has come as a nice distraction.

The World Premiere of your directorial debut Here Comes Hell is taking place at Arrow Video FrightFest Glasgow 2019. What’s the film all about?

Our quick pitch was “Downtown Abbey meets Evil Dead’ which I think sums it up quite well. It’s set in the 1930s and shot like a film from that period. It’s about a dinner party that goes wrong when the guests perform a séance and inadvertently open a gateway to Hell. The idea was to combine two very different types of movies, a kind of period drama that smashes headlong into a monster movie from the 80s.

Where did the idea for Here Comes Hell come from?

I think I was watching David Lean’s Blithe Spirit and I loved the séance scene in that and I just thought what would happen if it wasn’t funny but instead turned into a crazy horror movie. I’ve always liked Agatha Christie and early Hitchcock, but also at the same time I love horror movies like Sam Raimi’s Evil Dead and Peter Jackson’s Braindead and a movie like this let me play with all their different influences.

The special effects in the film are impressive. Can you give us a little insight into how they were achieved?

I really love practical make up and gore effects in movies, and even when they don’t look 100% real they have such a great feel and charm to them, it’s just something that CGI can’t match (we also couldn’t afford CGI, so there was never any option!). But the whole film had to feel as if it was made in the 1930s. When it came to the effects they too had to fit in to that style so it really allowed us to play around with old school effects, like rear projection and models.

What would you say were the biggest challenges you faced when making the film?

This was my first time directing a feature film, so that was already scary! We made this film for a tiny budget (£22,000) which was difficult for what we were trying to achieve. The shoot was really tight, we shot in 19 days so we had to move super fast. It was crazy! We would be racing from set up to set up, each morning I would look at the schedule and be like “there’s no way we’re going to make this, this is mad!” Each day was a battle, but the cast and crew were so good we managed to pull it off!

Tell us about the casting process. How easy was it to find the right actors to bring these characters to life?

We were so lucky to get this cast, they really made the film. Without them the movie wouldn’t be anywhere near as funny or as engaging. They all made the characters really jump off the page. I saw Jessica Webber in a play that Ben Pearson, the composer of Here Comes Hell, had written music for. She really made me think of a silent screen actor and I knew she would be perfect for Elizabeth. Then I saw Charlie Robb doing a stand up show and he was so funny. He really brought a different take to the character of Victor. I’d worked with Margaret Clunie and Tom Bailey before on a short film called Dungeon Of Vampire Nazis and they were so great I really wanted to work with them again. When we started writing, we had them in mind for George and Christine. Margaret then introduced me to Timothy Renouf, and as soon I met him I knew he had to play Freddie – he has this old movie star feel about him. Then finally my Mum plays Madam Bellrose, so that was really fun working with her.

There are lots of nods to classic horror films throughout the film. What films would you say influenced Here Comes Hell?

The most obvious is Evil Dead and Braindead. From Dusk till Dawn was a big influence when writing, also stuff like Ghostbusters and An American Werewolf in London, those movies were a real influence on the tone we wanted to capture.

But each scene has a different influence, we have our John Carpenter’s The Thing moment and there’s a direct references to Psycho in there, and there’s a lot of The Shining and Rosemary’s Baby as well. But then there are directors like Hitchcock and James Whale that really influenced the visual style.

What’s the one thing that you hope audience’s take away from the film after they’ve seen it?

What horror film would you like to remake and why?

I would remake Alien vs Predator but it would be a nature documentary with David Attenborough narrating it.

Why should people check out Here Comes Hell at Arrow Video FrightFest Glasgow 2019?

If you want to see a black and white bloodbath with Cocktails, Caviar and Carnage… come see HERE COMES HELL!

Here Comes Hell receives its World Premiere at Arrow Video FrightFest Glasgow 2019 at 6.30pm on Friday 1st March 2018. You can watch the trailer below: