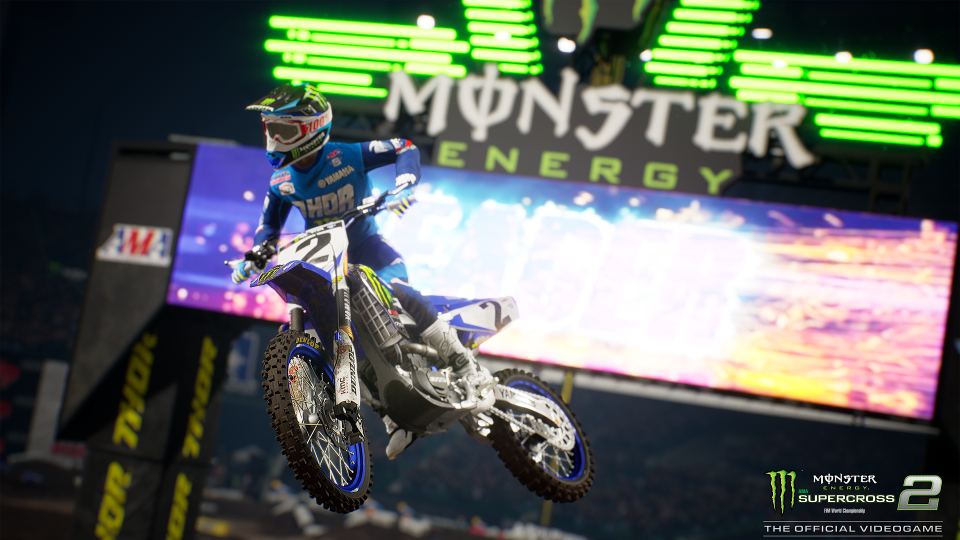 The prolific Italians, Milestone, are back with another motorbike racing simulator, their sixth release in under a year. I have had the pleasure to play through most of these so I now know what to expect. Milestone is one of those developers for whom the ‘middle ground’ is never where they end up. In each review I have done I have been knocked back by the quality, both good and bad. When I was asked to take a look at Monster Energy Supercross 2 (MES2) on the PS4 I was once again faced with a familiar dilemma; what was I letting myself in for?

The most obvious place to begin is with the graphics. Once again the way this game looks is exceptional. The weather effects in particular are not only realistic and immersive but they have a tangible effect on the track and therefore the race itself. On the first lap in the driving rain everything is normal (though the change in control needs to be accounted for) but by lap two the corners are well worn, the mud flies onto your formerly pristine rider, and the racing line becomes an area to be avoided. I adored this aspect of the game, it took MES2 away from being just another arcade port and into a genuinely tactical and exciting game to play. Though I am personally not familiar with the tracks in real life, I can say that the way they look and feel in the game are excellent. The roar of the crowd chimes in when you expect though their animation still feels fairly static. This is not a big issue but when you look at the in-game crowd animations on games like FIFA 19 they just add a bit more depth to the experience, such a small touch could have given so much, particularly when you consider the amount of depth Milestone have built in to the gameplay.

One of my biggest concerns with motorbike racing games in general has been the control. So often this is what lets the game down, this is especially true when it comes to the in game physics. I am happy to say that in the main MES2 handles very well. I didn’t find that oh so common issue of crash inconsistencies to be too prevalent here. When I crashed or came off my bike, I knew why and could adjust my racing style accordingly. The bikes and the riders themselves look and sound excellent and there is a noticeable difference in handling depending on the customisation options you select. The races themselves are perhaps quite tricky for a novice to understand but once you get the hang of it, it all feels very natural.

In Supercross, for those who are unaware, riders take large jumps with significant airtime as a key part of the race and the landings can be tricky. Where MES2 excels in comparison to other Motocross/Supercross titles I have played is that you are able to properly control your riders’ weight distribution on the bike. This has been tried before but always felt clumsy and inconsistent but here the transitions are smooth and precise meaning that once again, if you don’t land your jump, it’s your fault. For the connoisseurs of Scalextric amongst you the racing gameplay will feel intuitive, this is no ‘pedal to the metal and hope for the best’ race, this is controlled and requires a lot of practice and skill to time the accelerations properly. If you don’t, not only will you be in last place but your rider will be so covered in mud as to render the detailing on his clothes irrelevant.

As normal you have the career mode, championships, single race, time trials and online play, all of which work well. You also have the option of playing in a sort of open world training complex which does allow you to get to grips with the control and the way in which the game works. Having said that, once I understood how to work with the steering and weight distribution this facility held little lasting enjoyment.

View some Monster Energy Supercross 2 screenshots in our gallery:

One aspect that could have used more improvement is the cutscenes in the career mode. They are exceptionally short, don’t offer much variety or any storyline (not that any is needed) and the comments made are generic and grow old quickly. In terms of this game I genuinely think Milestone would have been better off not having these. I wouldn’t have missed them if they weren’t there but now they are, I just find myself noticing how poor they are. During the season, the player is also given the option to take part in other, non-motorbike, things like interviews and media appearances. This increases your fame and can lead you to get better sponsor offers and therefore more money to customise yourself. This in theory seems like a good addition but in practice it just feels unnecessary. The animations are almost static, there is little to no sound on the scenes and it doesn’t really add anything that couldn’t be accomplished through the previous method of earnings from races. It just feels very tacked on, like an afterthought. FIFA’s ‘The Journey’ this is not.

Overall, Monster Energy Supercross 2 for PS4 is a very good Supercross game. The control issues in previous games in this genre have been rectified, the graphics are superb and the methods of gameplay ensure that there is something for everyone. Even complete novices can adjust the difficulty sliders on a variety of areas to ensure they can enjoy the game. Though the attempt at fleshing out the career mode feels forced it did not significantly reduce my enjoyment of the game. I went in not knowing what to expect and once again I am pleasantly surprised. Well done Milestone.

Monster Energy Supercross 2 was reviewed using a digital code supplied by the publisher.