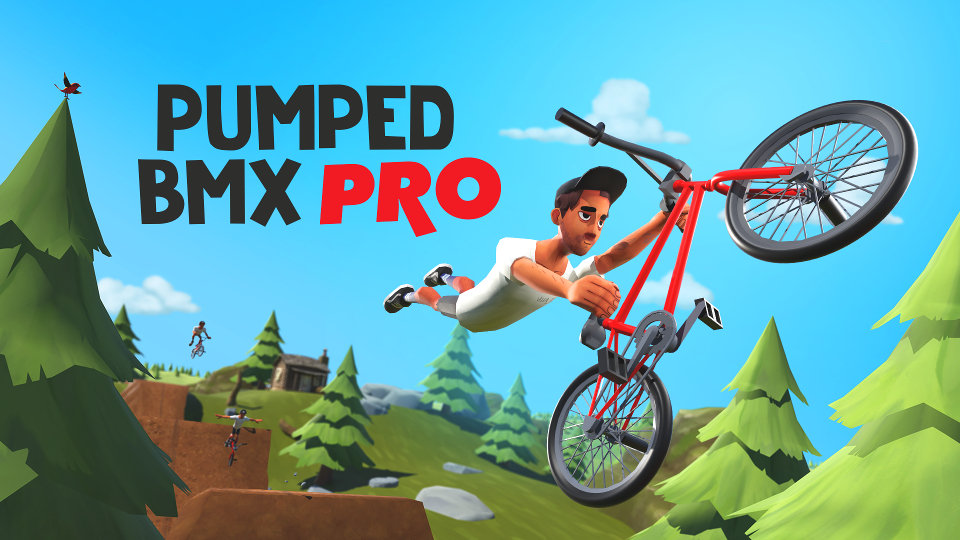 I remember back in 2009 when everybody was raving about Trials HD. While I was happy enough playing Fallout 3, The Elder Scrolls IV: Oblivion and Guitar Hero: World Tour, I thought it was a cool looking game. Watching people play it on YouTube was enough to convince me to get it but year after year, other games caught my attention. Here we have Pumped BMX Pro and I’m hoping this can persuade me to finally embrace this genre.

Summing up the story is simple, there isn’t one. Gameplay-wise the set-up is simple. Presented as a side scrolling game like Trials, you have to get to the end of the track without falling, crashing or stopping. You kick off with the A button and hold it to maintain speed, then release it to “Pump” off ramps. Holding A in the air dives you to the ground. Tricks are done using the bumpers, buttons and sticks and there is quite a wide variety of tricks for you to master. Pressing the Y button will allow you to restart the level. The physics on the character are pretty good and I never felt like I was cheated, my failure was down to my lack of skill. The rag-doll physics are solid and it’s fun to splat your avatar on the ground.

There are 6 worlds with roughly 10 levels in each, which get progressively difficult. I struggled later in the game but I can see a veteran being able to breeze through them. In each level there are, usually, 4 challenges to beat. This can be a single trick to a string of tricks. There are two point scoring challenges in each level to get and these can be posted online as bragging rights. All in all, there are hundreds of challenges to beat across the worlds, so there is plenty of content to keep you going. It all feels decent enough and the button layout works quite well. There are several riders to choose from and a bunch of bikes to pick but they are only cosmetic changes.

Visually the game is very poor indeed, especially the ugly character designs. It looks like a mobile game or a poor Steam game, in fact Trials HD looked far better way back in 2009. The levels are all uninteresting and blend together unlike the action packed, evolving levels in the Trials series which makes this game feel very cheap. A killer soundtrack would of elevated this game a little but the soundtrack here is forgettable to say the least.

View some Pumped BMX Pro screenshots in our gallery:

While this isn’t my type of game, I can see that the game does what it sets out to do quite competently The problem is that there are games that have done this better that came out a long time ago. Those games are a fraction of the price of Pumped BMX Pro, though it is important to note this game is available on Xbox Game Pass and it’s definitely worth the price of “free”. Also there is no personality to the game, nothing to invest you. The old Tony Hawk’s games has silly stories and Trials has crazy, explosive levels but this has nothing, not even voiced characters. I may suck at it but I enjoyed it for what it was and fans of this genre will have a decent time though not enough to keep them away from Trials.

Pumped BMX Pro was reviewed using a digital code supplied by the publisher.