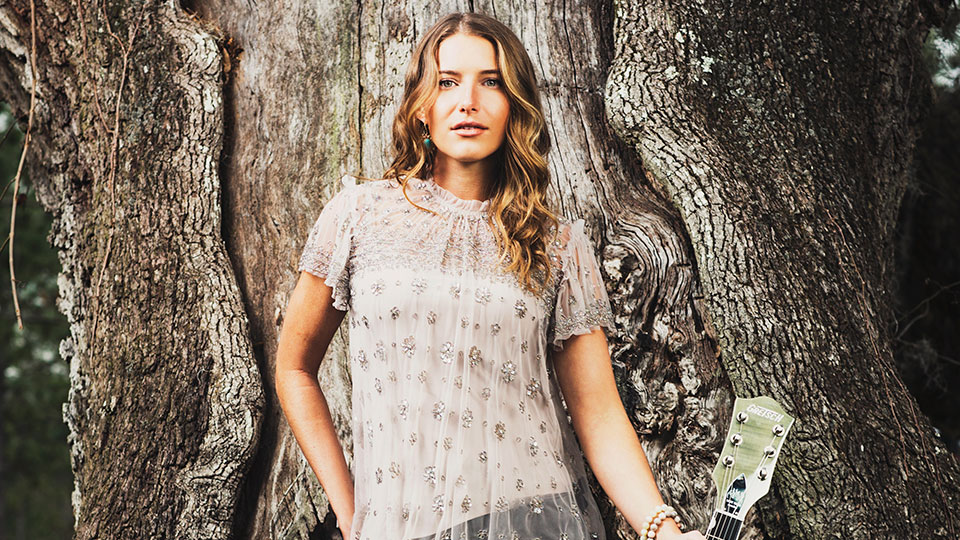 Caroline Jones is one of the performers for this year’s C2C: Country to Country that people may not be as familiar with but she’s certain to be one of the highlights.

The singer, songwriter, producer and multi-instrumentalist has been making waves with her latest album Bare Feet. In March she’ll be performing on the Spotlight Stage inside The O2 Arena at C2C.

I had a chat with Caroline to talk about C2C, discuss her career to date, and to find out when we can expect new music.

How excited are you about coming over to the UK as part of C2C?

I’m very excited about performing internationally and I’ve heard nothing but glowing reviews about your appreciation for songwriters and storytellers. I’m very excited!

We have a reputation here in the UK for knowing every word to every single song. I hope you’re prepared for that?

Will you have time to do any sightseeing when you get here?

I think I will because we’ll be getting to Dublin a few days early. I’ll be able to look around there and I’ve never been to Ireland so I’m very excited to see that. If there’s any sightseeing to be done, it’ll probably happen in Dublin.

Your latest album Bare Feet was released in 2018. How did the concept for that record come about?

Bare Feet is my baby. We be built it from the ground up with a pretty small team, me and my producer Ric Wake who has produced Mariah Carey, Celine Dion and Whitney Houston. I wrote all the songs, I played all of the instruments except bass and drums, and co-produced it with him. It really was a labor of love and it’s an uplifting and lyrically deep album that’s hopefully really high energy, very joyful and authentic. Those are the things that I want my music to stand for.

The album doesn’t sound like what else is out there in Country at the moment and as you mentioned it’s very upbeat and uplifting as well as very personal. As a songwriter do you find it easy to open up and share those personal stories?

Yeah I do, I think depending on the context. I like to keep the message of my music pretty uplifting and focus positively, so in that way it really is easy for me to open up because that’s one thing that I focus on as a person and as an artist. That’s really the message that I want to put out into the world. I think on songs that are super personal, maybe like Country Girl or Tough Guys, that come from personal experience, maybe personal challenges, those writing sessions can be very therapeutic and very cathartic, which is a beautiful thing to experience as a creative person. That’s kind of what you’re always waiting for because that’s the big stuff. That’s the true stuff that really connects with people.

Let’s talk about all the instruments you play. How on earth did you manage to learn so many and which would you say is your favourite instrument to play?

First of all I’ve dedicated my life to this and this is what I love the most. That’s how I spend all of my time. It’s a genuine passion. I don’t have enough years in my life to master them all but I just love production and I love layering instrumentation and I love arranging. I started to pick up instruments because I was trying to make my show more interesting and compelling for people. Also I grew to really love production and I wanted to produce. I had very specific parts and ideas in mind that I wanted to be able to bring to life. Developed an instrumental class has been essential for me in that regard. In terms of my favourite instrument to play… I don’t know. I think when you tap in to whatever you’re playing, whether you’re singing or playing guitar or piano, it’s such a special moment. It’s really more about the state of mind. I know that sounds kind of cheesy but it’s really more about how tuned you are to creativity and you get a moment from what instrument you’re playing. I’ve been playing a lot of piano because on my time off I can find myself gravitating more towards that because I don’t play it as much in my show. Piano was my first instrument too.

Your voice is absolutely beautiful. I think it’s one of my favourite things about you and I know that you’ve learned to sing lots of different styles. You’ve mentioned that you were influenced by Celine Dion growing up and you wanted to sing like her. How did you develop your voice and what influences would you say impacted on it?

It’s such an amalgam because I grew up singing opera, that’s how I started singing, technically speaking, but I grew up listening to a lot of the divas of the 90s. The 90s was one of the golden ages of vocalists with Mariah Carey, Whitney Houston, Barbra Streisand and Celine Dion. I also got into singing jazz and American Songbook tunes and this was all before I even discovered Country music (laughs). There’s a lot of influences there but I would say my biggest vocal influences are Emmylou Harris, Vince Gill… Mariah and Celine Dion were really big ones for me growing up… Barbra Streisand… those are the main ones.

You’ve got a lot of touring coming up including dates with Kenny Chesney. How are you feeling about those and how do you prepare to go out on the road for such a gruelling schedule?

We just finished the tour with Vince Gill, which was just exquisite. His band and his show is so authentic and just at the pinnacle of musical excellence. I’m such a huge fan of his guitar playing and songwriting and singing and production. That was a dream come true to open for him and it was in these intimate theatres, which is a really special unique experience that’s very different than a lot of the other Country tours I’ve been on. My next big tour will be Kenny Chesney and I’ve been a fan of Kenny’s for a long time. I got to meet him about a year and a half ago and he’s been extremely supportive of me. I’m really looking forward to that and I really admire what he’s built and the longevity of his career. In terms of preparation, we’re just used to preparing for tours now, that’s really the crux of what I do and it’s really important. My health is really important to me and my stamina and my energy. Everything revolves around the shows so you just need to make sure you’re in good shape and we prepare our show. Honestly that’s what me and my band, and everyone who does this, this is what we love the most. It’s the most rewarding experience. Touring is kind of like summer camp. You’re in a different place every day but you’re with the same people and become really close to them. Every show and every audience has a different energy and a different vibe and it’s just the most fun.

I always look at the itineraries that you guys do and I just think I couldn’t even do four of those dates. I’d be shattered…

(laughs) It’s funny you say because I used to look at tour routing and I would think the same thing, I’d be like, ‘how am I ever going to do this?’ I think the love of it just carries you through and I’ve been doing this for quite a few years and I think I know myself well in terms of how to manage my energy and how to focus for the show so that helps. There’s a certain amount of experience and that’s really beneficial.

Have you started thinking about the follow-up to Bare Feet yet?

Yeah absolutely. We’re always creating and recording when we’re not on the road. We have a new song coming sooner than you think so stay tuned!

Might we hear it at C2C when you come over?

You’ll definitely hear it in the show, yes for sure. Hopefully it’ll be released by by then or soon after.

What can you tease about the song? It is an evolution and a progression or is it something completely different?

I mean it’s always an evolution. It’s always a progression. I think that’s just part of being an artist. You just can’t help but evolve (when you’re) playing this many shows and touring this much and maturing as a person and an artist. It’ll be an evolution. It’ll be similar to Bare Feet in that it’ll be a blend of Country and Pop production wise.

What are you looking forward to most about getting over to the U.K. in March?

I’m really looking forward to connecting with that audience, especially because I’ve heard that we have so much in common in terms of loving songwriting, storytelling, authenticity and musicianship. I’m really excited about connecting with those people. Hopefully it’ll be the beginning of a life-long connection with those people. That’s what I would love, to have a fanbase over there and be able to tour over there. band of other bands and we’ll have the toy up there and then upload by engine.

Caroline Jones’ album Bare Feet is available now. She will perform at C2C: Country to Country at The O2 Arena in London, which takes place from 8th to 10th March 2019. For more information and tickets visit http://https://c2c-countrytocountry.com. Watch Caroline’s video for Country Girl below:

Advertisement. Scroll to continue reading.
In this article:C2C, Caroline Jones