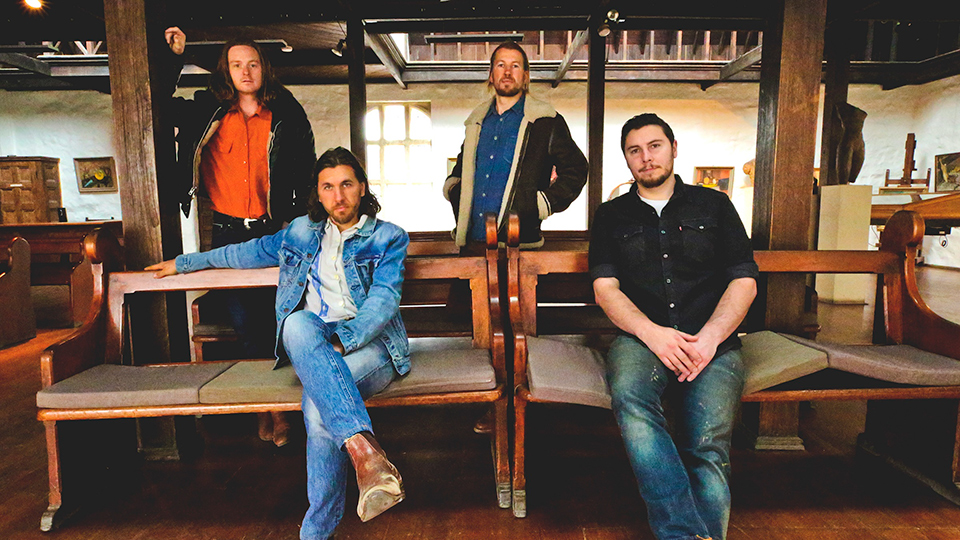 Originally from the Yarra Valley near Melbourne, the Teskey Brothers – made up of siblings Josh and Sam Teskey and their childhood friends Brendan Love and Liam Gough – have been performing together since they were teenagers. They bonded over a love of 1960s American soul music, which became the main influence on their 2018 debut album Half Mile Harvest. Chris Hemsworth has called them his ‘favourite band of all time’ and now they’re out on a UK tour, including a sold-out show at London’s Union Chapel.

The quarter arrived on stage shortly after 9pm to loud cheers from the packed audience. They opened with Crying Shame, the lead track from their debut album. It’s a swampy, soulful number which showed off the gravel and raw edge to lead singer Josh’s voice, whilst the addition of brass instruments was a nice touch. As the song drew to a close the audience burst into huge applause and it was clear that we were in for a night of great music.

Throughout their set the group mostly stuck to tracks from Half Mile Harvest, showing off their diverse musical styles on songs like the funky, slinky Shiny Moon and the atmospheric Say You’ll Do, which blended jazzy brass touches with a powerful, impassioned delivery from Josh before coming to an abrupt finish. They also threw in a couple of covers, including Freddie King’s classic I Love A Woman and a take on Michael Jackson’s The Way You Make Me Feel, which started off slowed down before picking up the tempo. It was a playful, light approach to the song and I loved the unique spin they put on it.

One thing which stood out to me during the performance was each band member’s excellent musicianship. Whether it was Sam’s fast-paced guitar playing, Brandon’s steady bassline or Liam’s drum rolls and flourishes, it’s clear they all love playing music and are incredibly talented. One great example of this was Honeymoon, a classic rock-influenced song which featured an extended instrumental break that switched tempos and built up layers of music. The band drew on every trick in their arsenal and it was a fantastic showcase for their skills. I also liked that they all got their turn to feature throughout the show, with Josh calling out who wrote which song as well as cracking jokes together and telling stories about their early years as a band.

However, what pulled it all together for me was Josh’s outstanding vocals. He has a tone that really reminds me of Chris Stapleton, simultaneously smooth and rich whilst also able to turn into yelps and whoops at a moment’s notice. The old-school soul song I Get Up showed off his incredible vocal projection as he backed away from the microphone until all you could hear was his powerful voice, whilst Pain And Misery was a moving moment full of conviction and palpable anguish.

The band closed the main section of the show with Louisa. The lively song combined rock and roll and gospel influences and featured a stomping drum intro before the band encouraged the crowd to clap along. It was a toe-tapping, irresistible number which concluded with some standout harmonies and a rollicking drum solo from Liam. The crowd roared their approval as the track came to an end and gave the band a standing ovation. They then returned to the stage to perform an encore of the mellow Forever You And Me, with its sunny melody, shuffling drums and bittersweet ending, as well as new single Right For Me. The final song summed up the performance for me brilliantly – its smooth laid-back groove was a great contrast to Josh’s quick lyrical delivery and deep vocals, and each band’s solo sections reminded you just how good they are.

Overall the Teskey Brothers delivered a set full of classic blues, rock and soul influences with incredible musicianship and fantastic chemistry between all four bandmates. It’s clear they’re having the best time performing and their energy was absolutely infectious. It was a performance that simultaneously felt fresh and modern whilst also having a timeless quality about it, and I absolutely loved it. I can’t wait to hear more from them – here’s hoping they’re back in the UK soon!

See The Teskey Brothers on tour in the UK:

In this article:The Teskey Brothers