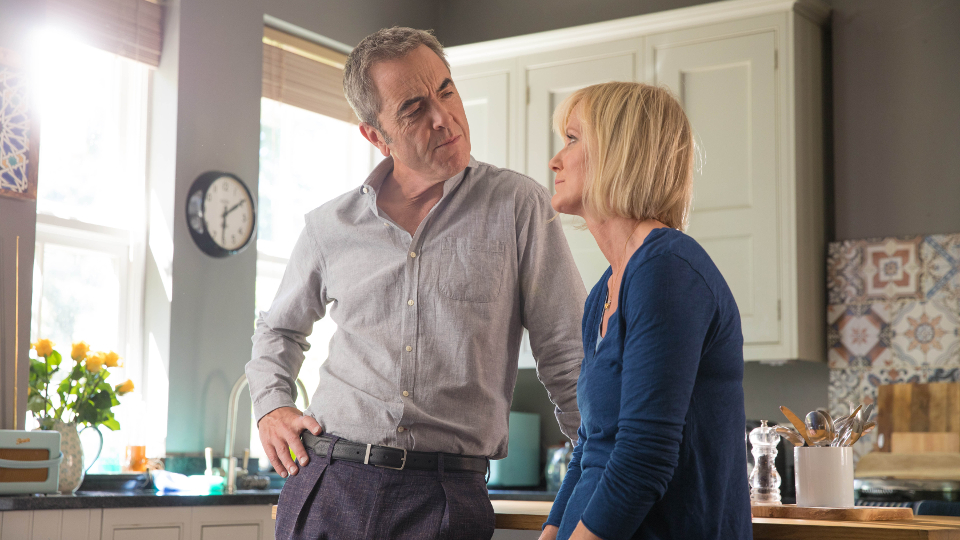 The episode opened up with Adam (James Nesbitt) reading a book for Caitlin (Eve Myles). He was imagining Karen (Hermione Norris) and himself as the main characters.

At Pete (John Thomson) and Jenny’s, Karen was there as it was Jenny’s first day of chemo. Chloe (Madeleine Edmondson) asked if her mum would lose her hair but she said she planned to try a cold cap. Chloe offer to shave hers off if she did lose it. Karen told them about her upcoming meal out with vicar Dan (Paul Kaye) but insisted it wasn’t a date.

At the hospital Jenny introduced Pete to Charlie (Ivanno Jeremiah) who was also there for chemotherapy. Jenny said she was more scared of the chemo than the cancer. She told Pete to go as Charlie was there so he reluctantly left her.

Karen called Adam and suggested he bring Caitlin to her meal with Dan for a double date. She had to rush off when business partner Benjamin (Paul Ritter) turned up. Karen was expecting a female romantic fiction author to be with him until Benjamin confessed that she was his alter ego.

Meanwhile, David had taken refuge at the airport and was passing the time by riding escalators. Karen called and he pretended he was going away with Nikki. He noticed that people often left food when their gate was called so he helped himself. He bumped into his ex-wife Robyn (Lucy Robinson) and told her he was off to Ibiza for a meeting. She offered to treat him to lunch in the executive lounge but he made an excuse that he’d left his passport in his car.

Pete went back to hospital to pick Jenny up after her treatment. She was ok but hadn’t used the cold cap because it gave her a bad headache. Charlie had invited her to join the cancer choir.

Arriving at the double date with Caitlin, Adam was looking forward to it and making vicar jokes. During the meal most of the talk was between Adam and Karen until Adam started a debate on religion and declared it was all bollocks!

Back home, Pete was watching The Chase on TV. A worried Chloe came to talk to him and asked if he’d adopt her in case anything happened to her mum. Pete, not wanting to put anything else on Jenny, said it might not be the best time.

Jenny decided to give the choir a chance. When she got there they had already started and being nervous she almost walked out. Charlie saw her and grabbed her before she left. Jenny joined in their rendition of Stop Crying Your Heart Out by Oasis and became emotional.

A few days later, still at the airport, David tried to tidy himself up in the bathroom without much success. He had a look in the bin but couldn’t bring himself to use a disposed razor.

Karen went with Jenny to a wig shop. There Jenny tried on some different wigs to prepare for losing her hair due to the chemo. She told Karen that she was loving the choir and that Charlie had been brilliant. Karen suggested she photograph Jenny as the face of Benjamin’s alter ego and she was delighted at the idea.

In the pub, Pete had a bit of a whinge about Charlie to Adam but agreed anything that helped was a good thing. He also spoke of Chloe and said he would love to adopt her but didn’t want to mention it to Jenny at the moment. The pair wondered why David hadn’t turned up or returned their calls. Adam spoke of how he found himself jealous of Dan at the double date. Then he decided to spill the beans and confessed about the festival kiss. He said it meant nothing but Pete said he was sure that Karen set him up with Caitlin as a diversion because nothing means nothing to Karen.

At the airport David spoke to Olivia (Daisy Edgar-Jones) on the phone about her exams. Robyn came back from her trip and spotted him again. He said he’d just got back and hadn’t shaved in order to blend in abroad. She offered a lift but David said the office had a limo picking him up. Robyn challenged him about his car but said he left the lights on.

Sensing something was wrong, Robyn called Karen to talk about David. They then went to the airport together and found him sleeping on a bench. When he woke he thought he was hallucinating. Karen took him to Adam’s so he could get a shower and tidy himself up. The whole gang rallied around him and each gave him a key to their houses. David was rather overwhelmed at their generosity and explained it was pride keeping him from asking for help earlier.

Pete worried that Jenny was doing too much by agreeing to the photoshoot. She was just happy to be doing something fun to take her mind off things. Benjamin was the photographer at the shoot and got a bit carried away but the result was a perfect picture for the book.

David took the girls for their history exam. When he got back he found he had the house to himself and made himself a huge sandwich. Before he had chance to eat it or tidy up, Olivia came back in tears. He sat and listened how she’d panicked in the exam and been unable to answer anything. He told her it didn’t matter and that she should focus on doing her best on the next one.

Pete arrived home to find that Jenny wasn’t there. She’d left a note saying she’d gone to the hospital. He panicked and rushed straight out. When he arrived he discovered that she’d gone to visit Charlie who had been admitted. Pete was livid because he’d thought that something had been wrong with her. He decided to come out and tell her about Chloe’s request.

Back home they sat with Chloe and Jenny explained that she wasn’t going to die. Chloe had emailed her real father and he’d agreed to sign the adoption papers. She brought them the email she’d sent and they broke down reading it.

Adam brought Matt round to see Olivia. While they chatted, he spoke to Karen who broke down in tears saying she was a bad parent. Adam consoled her and said how amazing she was.

Later, Adam went out with Caitlin to the place they had their double date. There he had a flashback to the other night and thought about Karen. He told Caitlin that he was ending things and she threw a drink over him and stormed out.

Karen paid Dan a visit at the Mission to see if she could help. After they’d finished their work he invited her overnight to London with him and she agreed.

Later there was a BBQ at Adams and everyone turned up. Karen gave David a cheque to repay him for bailing her out in the past. He also borrowed a little cash, some of which he used to replace the £20 he stole from Adam.

Karen and Adam spoke, she asked why he had ended things with Caitlin. He quoted something that David had said about better to be alone if you can’t be with the right one.

David made a little speech saying how he’d lost sight of what was important. He thanked his family and friends for reminding him of what really matters. Chloe also announced that Pete was adopting her.

Karen had to go to meet Dan for their trip to London. Adam asked if she really had to. She left and met Dan at the train station.

At the end of the episode, Jenny was tired so went home. After Adam put her in a taxi, another arrived and Karen got out. She said he’d misquoted David and that friends don’t kiss like they did. They shared another and walked inside together!

Can’t wait for the next episode? Read our Cold Feet series 8 episode 6 preview.