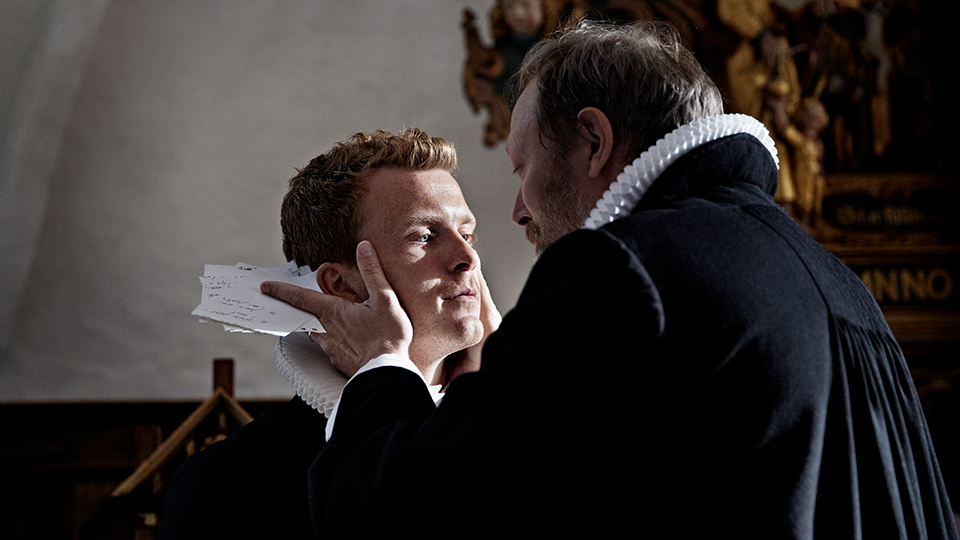 If you’re worried that your family might be slightly dysfunctional, you should check out this latest Walter Presents offering. The family at the centre of this series have got dysfunctional down to an art!

If you want to avoid all spoilers for Ride Upon the Storm, stop reading this article right now.

Starring celebrated Danish actor Lars Mikkelsen (House of Cards, The Killing, The Team) as Johannes (a priest who has more than his fair share of demons) this is the latest big-ticket item from Danish broadcaster, DR – the natural successor to Borgen. And that’s a fair comparison because Adam Price – the very un-Danish sounding creator of Borgen – is also the man behind Ride Upon The Storm.

First thing to point out is that this isn’t Nordic Noir. There’s no crime as such, but it’s more the tale of family and the loyalties and complexities within that circle of individuals. Like a Danish version of The Borgias, perhaps.
Johannes is a priest trying to become a bishop. Curiously, in Denmark they elect their bishops like they do their politicians. Priests run campaigns, have TV debates and canvas for votes, just like wannabee members of parliament. But when his campaign falls at the final hurdle, Johannes goes off the rails.

Turning to drink, Johannes goes on a bender of extreme proportions and ends up drunk at a funeral, where he hallucinates that he’s having a conversation with the dead man. The final nail in the coffin – almost literally – is when Johannes falls into the grave at the burial.

Johannes’ family try to keep him on the straight and narrow; in particular, his patient and enduring wife, Elisabeth (played by Ann Eleonora Jørgensen). She’s tolerated his violent outbursts, his alcoholism and his unfaithfulness, but is this latest fiasco the straw that breaks the camel’s back?

They have two grown sons, August and Christian. August is also a priest in a small parish. But when he’s approached by Monica – the woman who defeated his father in the election – to take on the diocese at a larger church, he’s torn between loyalty to his father and the opportunity to progress his career. His relationship with his father is difficult – his Dad bullied him throughout his childhood and continues to belittle him. Could this be an opportunity for payback? Christian is very different – very much the black sheep of the family, he’s caught cheating at an exam and faces being expelled from college.

Everything about this series smacks of serious investment and quality. The camerawork is sublime and the acting masterful. Mikkelsen puts in a stunning performance as the bawdy and reprehensible priest. The series has won awards worldwide, including an International Emmy for Best Actor for Mikkelsen. But it’s really the writing that raises this show to the heavens. Adam Price did a stunning job with Borgen, so one would expect nothing less. The idea for this show apparently came from a news report on the radio about priest elections that Price listened to whilst driving home one night. From that single bulletin has blossomed one of the best TV shows to come out of Scandinavia for a long time.

Walter Presents: Ride Upon the Storm started on Channel 4 on 28th January. The series is available on demand via All 4 in its entirety.

In this article:Ride Upon the Storm, Walter Presents