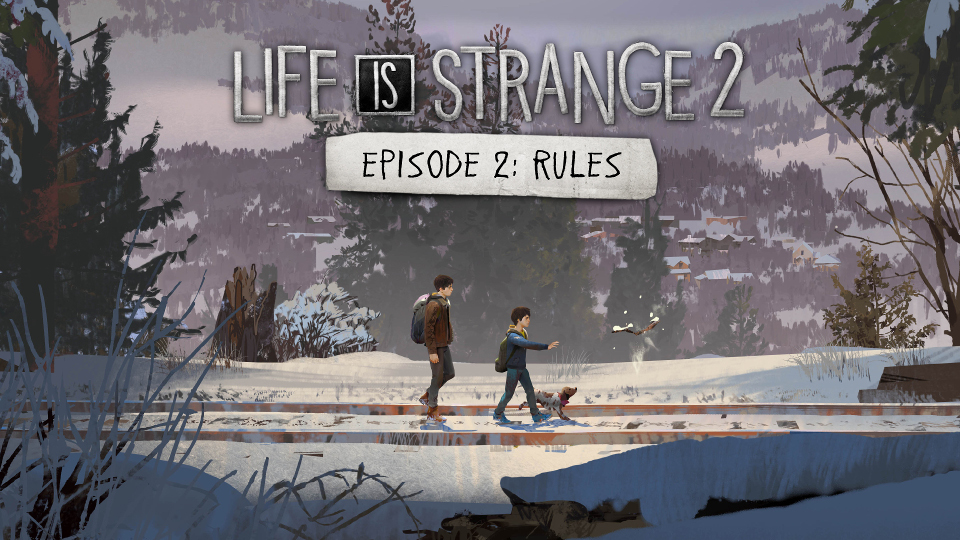 At the end of episode 1 we left the Diaz brothers, Sean and Daniel, on a bus heading south.

Before reading this review or playing the episode, I would strongly suggest you play Roads, the first episode of Life is Strange 2, and the free prequel The Awesome Adventures of Captain Spirit to avoid potential spoilers.

The brothers were on the run from the police after a cop killed their father and a supernatural incident led to the death of the cop. They left their hometown in Seattle and decided to head to where their father grew up in Puerto Lobos, Mexico. During the first episode it became apparent that Daniel was the cause of the incident through an unknown power that he possesses.

Episode 2 picks up a few months later and the season has changed to winter. They’ve been staying in an abandoned house in the woods. Sean has been working with his brother to help him understand and harness his power. Daniel is making good progress and can now move small objects at will.

Watch the Life is Strange 2: Episode 2 launch trailer below:

Although they are managing to survive, Sean becomes worried about his younger brother as he has become unwell. He decides that it’s time to hit the road again and makes the decision that they should go to their grandparents in Beaver Creek.

Being on the run is dangerous enough but Sean is also concerned about Daniel’s power. He sets some simple rules that he wants Daniel to follow – Never in public. Never talk about it. Run from danger. Daniel agrees but as you can expect they aren’t that easy for a 9-year old to follow.

Teachable moments return and throughout the episode you are constantly coming across decisions for Sean to make. How you handle these can have an impact on Daniel and how he behaves. For example, when Daniel says a swear word do you let it go or chastise him? Letting him swear without speaking up makes it more likely he’ll swear again. There have been plenty of these moments across the first two episodes and I’m sure the consequences of your decisions will be felt most in the later episodes.

Eventually the action moves to the grandparents house where the pair are given strict rules to follow should they decide to stay. Having not seen them for a very long time, due to a bunch of family issues, they don’t have the best relationship with their grandparents. It makes for some awkward situations and while the change of pace is welcome for the brothers, it makes for some tedious play at times that spoil the pacing.

The new location sees them cross paths with Chris Eriksen aka Captain Spirit. He’s the same age as Daniel and the boys quickly form a friendship. If you’ve played through Captain Spirit then Episode 2 will import your save file which influences certain things here. It’s a cool idea and I enjoyed the way the two overlapped. It also finally made certain parts of Captain Spirit make sense but I won’t spoil those here.

Other than the grandparents, there aren’t many new characters this time to cross paths with. One scene has you Christmas shopping and Sean comes across a girl named Cassidy who looks set to feature in the next episode. She’s more interesting than the grandparents and could have a big influence on Sean.

View some screenshots from Life is Strange 2: Episode 2 – Rules in our gallery:

Episode 2 brings more of the incredibly detailed environments to explore. Every location feels real and they are a joy to explore. The writing, voice acting and music are also all outstanding once again. Like the first episode I did experience a few sound glitches again with dialogue overlapping or looping sound effects.

Overall I enjoyed my roughly four hours with Episode 2. Like last time it left me wanting more and I can’t wait to continue the story. I’m hoping the gap to the next instalment won’t be quite as long this time. If you’ve enjoyed any of the Life is Strange games and particularly if you’ve already started your journey in Life is Strange 2 then you should pick this one up too.

Life is Strange 2: Episode 2 – Rules was reviewed using a digital code supplied by the publisher.

In this article:Dontnod Entertainment, Life is Strange, PC, PS4, Square Enix, Xbox One