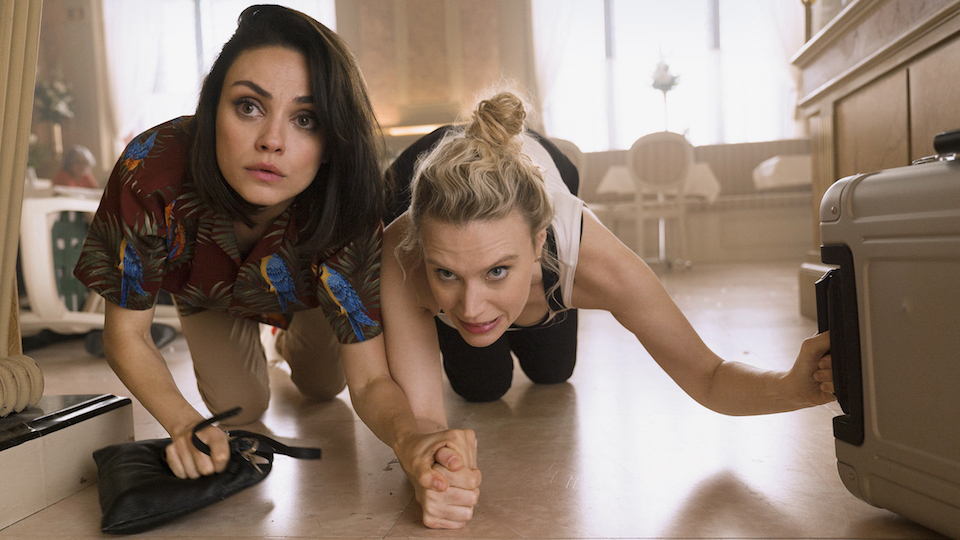 Here’s a bit of light-hearted fun to see you through that weird zone between Christmas and New Year, when no one quite knows what day it is, time has fractured, and the only constant in your life is cheese. The Spy Who Dumped Me is a comedy-thriller-buddy caper with a daft plot, deliriously silly performances, and a reasonably reliable source of laughs. Do you wish it could be better? Yes of course. But does it really matter, as you sit there drinking your third large Baileys of the morning, whilst cramming a whole wheel of Camembert into your face? No it does not.

Mila Kunis plays Audrey, a supermarket cashier (I know) who has recently been dumped by her boyfriend. Her best friend Morgan (Kate McKinnon) convinces her to burn all of the shit he left behind in her apartment. Unbeknownst to them, Audrey’s ex is a CIA agent (Justin Theroux), and hidden within his stuff at her apartment is the film’s macguffin – a flash drive containing, you know, stuff that lots people are willing to kill you for.

Before you know it, Audrey and Morgan have gone on the run with the flash drive, and soon find themselves international fugitives. Being a spy caper, the film takes them on a reliable tour of European capitals – because that’s where all espionage happens in Hollywood movies – and into the middle of numerous shootouts, car chases, and other bonkers mayhem.

The Spy Who Dumped Me is a massively ambitious film, but it can’t quite live up to all the things it is trying to achieve. As a comedy, there are plenty of laughs, and Kate McKinnon is just incredible. She is hilarious and unpredictable, and the chemistry with Mila Kunis is one of the best aspects of the film. But every scene that isn’t an action sequence is directed in a strangely flat way, as if it’s just a filler scene as we wait for the next bombastic piece of action.

And the action is very impressive, including some really cool single-take stunts that wouldn’t look out of place in a Bourne movie. It’s violent and visceral, and totally full on, and therefore completely out of step with the comedic tone of the film. It’s really jarring. Action-Comedy is not an easy genre, and Susanna Fogel has essentially directed two good but separate films here, and they are jostling for position and getting in each other’s way.

When it’s good it’s very good though. There is an Honoré de Balzac joke for the ages, and a terrific visual gag when an assassin is told to take out “two dumb American women” in Prague. As the would-be killer surveys the city through their crosshairs they soon realise that the order will need to be more specific.

But unfortunately, in the end the cons outweigh the pros. The film is chaotic, and sloppy, and leaves a major plot strand completely unanswered. As the film approaches the final act, the pace drops right when it should be changing gear. It all grinds to a halt and the final third just drags. A more judicial edit could have done wonders for this film. Then again, if you’re just looking for something undemanding, with a few giggles, a couple of decent action scenes, and Kate McKinnon doing her thing – the The Spy Who Dumped Me will not let you down.