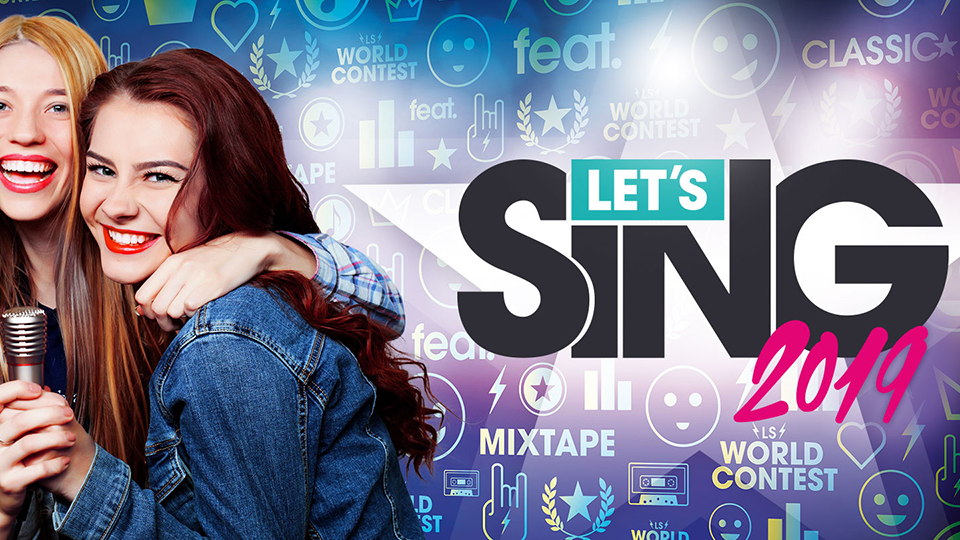 Let’s Sing is a fairly flexible game that caters to solo singers as well as groups. There are four gameplay modes – Classic, Feat., Mixtape and World Contest – all of which allow multiplayer apart from World Contest. You can use microphones for the game or you can download a free smartphone app that turns your phone into a mic. I liked having the app option as it means the game will be more affordable for people. Mics can be expensive so being able to download an app that offers the functionality is a nice touch.

The obvious place to start with Let’s Sing is the Classic Mode. You can cycle through the songs and play solo or in a group. The song choices are pretty varied and there should be something for everyone. From older songs such as Queen’s We Will Rock You through to new chart hits such as Zedd featuring Grey and Maren Morris’ The Middle there’s a nice range to choose from. Each song is assigned a difficulty rating so if you want to work up to the harder ones you can.

Once you sing a song here, it’s unlocked for the Jukebox (more on that later). As the song’s music video plays in the background, the words appear at the bottom of the screen while the notes you need to hit are spread across the screen. You’ll see your score rising as you hit the notes and the more you can hit in succession, the higher your score. There are also golden notes, denoted by a golden bar, that can give you loads of points if you hit them properly. This usually includes holding long notes or hitting hard ones. There’s the chance to win bronze, silver, gold, platinum and diamond records, depending on how you perform.

Feat. mode allows you to sing with a friend or with the artist whose song you’re belting out. The notes you need to sing are highlighted on the screen and sometimes you need to sing together. Singing with the artist, while fun, does mean you get an unfair points advantage because obviously the artist is going to hit perfect notes and score perfectly. It’s much tougher trying to get a decent score if you’re singing with a friend.

One of the most interesting features is the Mixtape Mode. You can choose to sing pre-made mixtapes or you can create your own. There are five songs to work through for each mixtape and it can be tough to switch tempos and vocal styles. It presents a nice challenge and keeps the game feeling fresh, even when you’ve worked through all of the songs.

The final mode is World Contest, which is essentially an online multiplayer. You sing a song, on your own, and your score is compared with other players online. It adds a nice bit of competition to the proceedings and gives you reason to keep playing as you improve your score and climb the leaderboard.

Once you’ve worked through the songs and unlocked some, you can visit Jukebox to watch the videos without the pressure of having to sing along. It’s quite a nice extra to have, especially if you get all the DLCs as you’ll build up quite a nice library.

At the start of the game, and when adding new players, you need to assign avatars. As you progress you unlock more and more, and you can change your avatar whenever you want to by going into the Player Profile section. There’s a decent enough range and it makes it much easier to see which parts are yours when you’re singing with other people.

There are some areas where Let’s Sing could be improved. The load speeds between songs is slower than you’d expect and it holds up the game a little bit. I clocked around 10-15 seconds at some points, which was disappointing. The other thing that could work slightly better is the accuracy of hitting the notes. At times I was singing in the right pitch but the screen showed I wasn’t scoring as the notes were being missed. Moving the phone closer to my face or just making my voice louder corrected that but it also made me realise that volume seems to be more important than accuracy.

Let’s Sing 2019 is certainly an attractive package. It will appeal to singers of all ages and I’m sure it’ll be used in plenty of houses over the Christmas and New Year period. It’s slightly slicker than other singing games on the market and visually it’s very impressive. Aside from the slight issues I mentioned earlier, there’s plenty to draw you into this game and keep you coming back again and again.