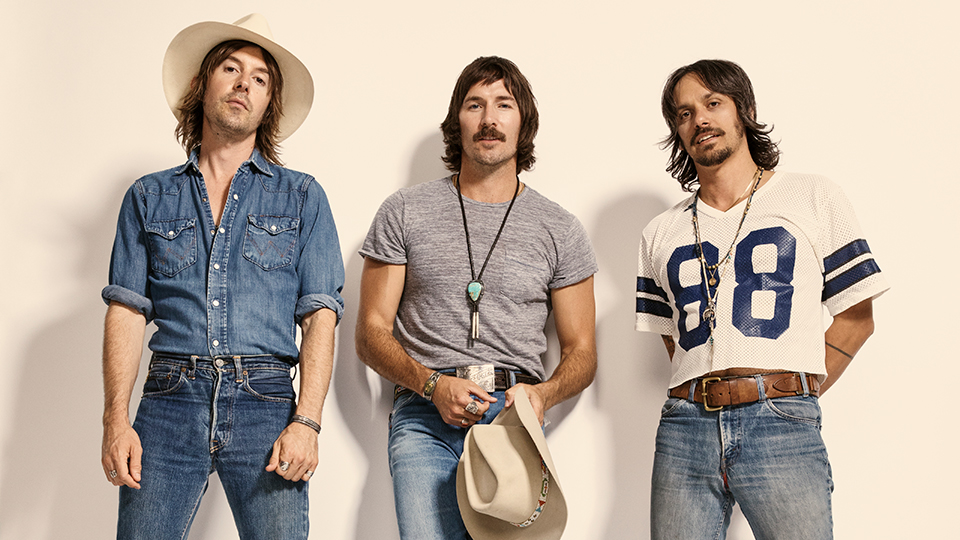 Midland made their UK live debut back in March on the Main Stage at C2C: Country to Country. They were one of the band’s that attendees were most excited to see and they lived up to the hype. The day after C2C finished, Midland performed their very first UK headline set at the intimate London venue Omeara to a sold-out crowd of 350 people. It was without a doubt one of the best, if not the best, shows of the year and it marked a huge breakthrough for the trio here in the UK. Realising they’re onto a good thing, Midland – Mark Wystrach, Jess Carson and Cameron Duddy – announced their first UK headline tour quickly after and last night they pulled into London for a sold-out show at O2 Shepherd’s Bush Empire.

Easily one of the most-anticipated shows of the year, Midland had an impossibly high bar to live up to (which they set themselves back in March at Omeara) but I already knew they could hold a huge crowd as they did that at The O2 Arena for C2C and made it look easy. The crowd was lively before the guys even arrived on stage thanks to a solid and impressive set from opening act Desure. With Country Roads blaring out of the speakers, Midland made their way to the stage and launched into Check Cashin’ Country. From that point on the O2 Shepherd’s Bush Empire turned into an epic party that didn’t let up for close to two hours.

Never ones to repeat themselves, Midland switched up their set aware that many of the crowd probably saw them back in March. Among the selections from their debut album On the Rocks, the band mixed in plenty of covers and some new material too. On Gator Boys, a song that has been part of the band’s set list for a while, Cam forgot the words and masterfully styled it out getting the audience to sing happy birthday to him (it was the first time he’d spent his birthday abroad according to Mark). It was a funny moment and the band returned to where they left off with Gator Boys, which they mixed in with a bit of John Mellencamp’s Jack and Diane and David Lee Murphy’s Dust on the Bottle.

New song 21 Century Honk Tonk American Band, taken from their upcoming second album, sounded fantastic and you could hear the progression in the band’s sound. It was catchy, memorable and the harmonies between the three band members were so incredibly tight. In the middle of the set Midland launched into a series of covers starting with Bruce Springsteen’s Tougher Than the Rest. The standout moment was a very funky version of the Rolling Stones classic Miss You. Could a funk and disco-based album be in the band’s future? I’d love to hear it!

The one-two punch of Altitude Adjustment and Make a Little ramped the energy of the crowd up even higher before the band exited the stage leaving their guitarist Luke Cutchen to play an impressive solo. The expected one song encore was thrown out the window when Midland returned to perform another four tracks, kicking off with their monster smash Drinkin’ Problem. The singing and appreciation from the audience during that song was incredible. Cam got another round of Happy Birthday, this time with a cake and candles, then Midland rounded out the set with a cover of Willie Nelson’s I Can Get Off On You and The Band’s The Weight, which featured Desure.

For their final song of the night, Midland put their spin on Chris Isaak’s classic Wicked Game and it worked so incredibly well. Mark’s voice hit all the high notes and Cam’s drumming gave the song an almost tribal feeling by the end. In fact he stayed on playing drums after Mark and Jess left the stage and the audience lapped up every single second.

Last night Midland proved themselves to be one of the best live acts of any genre of music. Their chemistry on stage is evident, their harmonies tighter than their trousers and their musicianship on point. Jess and Cam got to show off their vocals taking lead a few times throughout the set, and Mark really showcased what he can do with his voice. Midland have conquered the UK Country crowd and I’m certain it won’t be long until they’re back. No one throws a party like Midland and if you haven’t seen them yet, do yourself a favour and snap up tickets for their next tour.