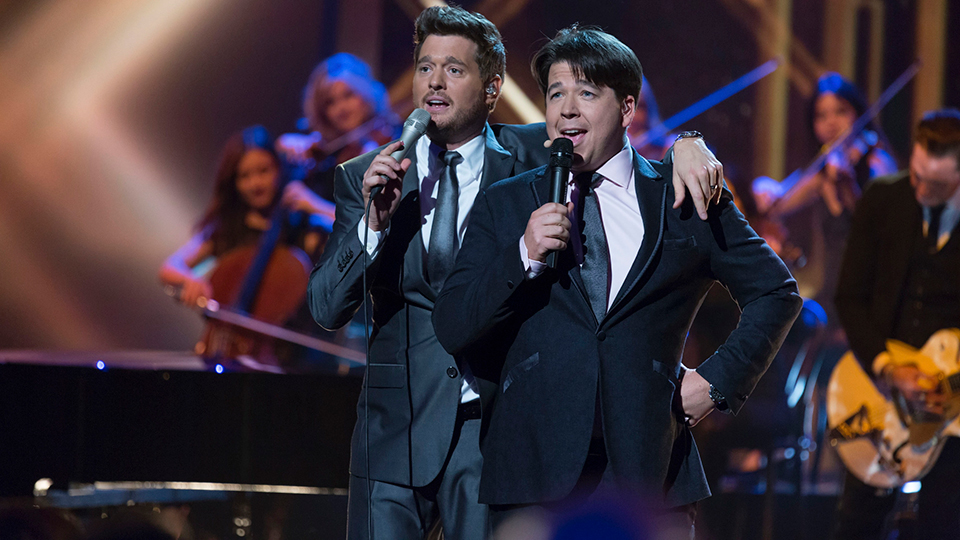 An exclusive out-take has been released from this weekend’s episode of Michael McIntyre’s Big Show that sees the comedian performing with musical guest Michael Bublé.

On this Saturday’s show viewers will see Bublé singing When You’re Smiling from his new album love as well as giving McIntyre some singing tips. In this out-take, that won’t be broadcast as part of the show, McIntyre shows off his singing chops by duetting with the superstar.

On the duet, McIntyre said, “I had a great moment with Michael Bublé where I asked if he could teach me to sing like him and he said why don’t we sing together, so we did! It was great because my wife and children came to watch his performance. I did every dance move I could think of in-between, I even greatly embarrassed my children by doing that floss dance very badly. It certainly felt very showbizzy, what a charming man Michael Bublé was, very generous and game for a laugh.”

As well as Bublé’s performance, Saturday night’s show will also feature a double send to all with presenters Eamonn Holmes and Ruth Langsford, Rita Ora has a special message for McIntyre’s son and there’s another amazing performance from the Unexpected Star to close the show.

The episode also will see the return of the Midnight Gameshow and TOWIE star Joey Essex will help McIntyre to surprise contestant Keeley.