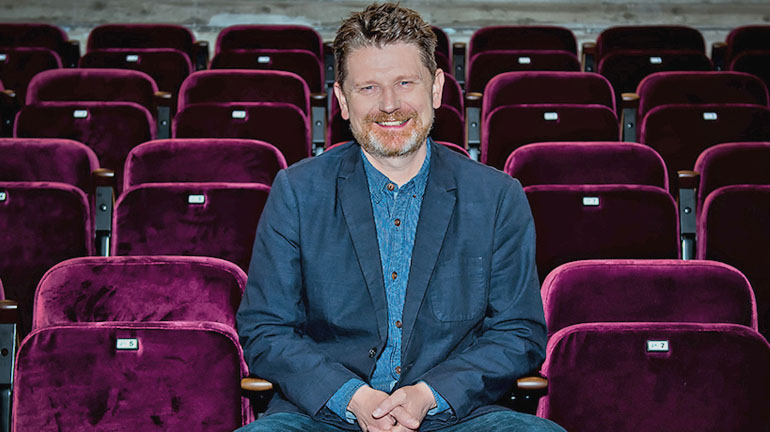 This December, Square Chapel Arts Centre presents a unique showing of Barry Hines’ apocalyptic thriller Threads. It is followed by a Q&A with the film’s star, Reece Dinsdale.

We caught up with Reece to talk about his current projects and his memories of Threads — a film which shocked the nation in 1984 and continues to make an impact today.

Hello Reece. What are you up to at the moment?

This weekend I’ve been watching football with my boy, as you may know from my tweeting. We have a great affinity with Huddersfield Town and they went away yesterday — and won spectacularly.

Professionally, I’ve just finished directing two episodes of a new series for BBC One called Pitching In, and I’m about to play Benedick in Much Ado About Nothing for Conrad Nelson at Northern Broadsides.

How did that come about?

I was on holiday this August in Scotland and Conrad sent me a little text saying “How about Benedick in Much Ado?” and I said “I’m far too old. Great part, great play, what a pity.”

But he wasn’t having any of it. He told me I was wrong and that I still had a young energy, and that the whole point of the play is that it’s not the same type of love that Hero and Claudio are expressing — it’s an older, wiser take on it.

Presumably, as it’s from Northern Broadsides, it’s Shakespeare with a northern accent?

Possibly. I’ve always thought it’s great to use northern accents, but you’ve got to be very careful with that sort of thing — ensuring everything still fits and works.

So whilst I feel happy with the idea of using my own naked accent, I don’t necessarily go into things thinking “I’m going to do this right northern.” I’ll play things in my natural voice and I’ll lean towards those wonderful flat vowel sounds we have, as long as it serves the play. As far as Much Ado, we haven’t really had that discussion yet.

Your performance of Richard III at Leeds Playhouse had a northern lilt which worked brilliantly.

You know, the older I get the more I believe in working with my own voice as I find the characters are far more centred that way.

I’m not saying I can’t do other things, or shouldn’t do others things, but I’m really enjoying finding myself and my centre on stage. In the last five years, it feels like I’ve hit my stride as an actor. It feels good — it’s a rich vein I intend to pursue.

Now there’s an opportunity to reappraise Threads at Square Chapel — a film which was at the beginning of your television career.

It’s interesting, because I’ve not seen it for over thirty years. Truth be told, I can’t recall seeing Threads again since we all viewed it on broadcast on BBC One in 1984.

I’ve been kindly sent a DVD of the remastered version and I’m in two minds about reviewing it before Sunday’s showing. It may be interesting to share that experience with the audience — some of whom will have seen it and others not — to look at it afresh and discuss that feeling with them.

We did a similar thing with a film called I.D. which was a huge cult hit, and I didn’t review that one until we saw it again at Square Chapel. It was very strange as I was quite disturbed by it, because of the level of physical and sexual violence.

I didn’t recognise myself in so many ways. It was like it was from another world, another land, another time. It was quite a weird experience on the night and I was mentally and physically shocked, because I hadn’t seen it for so long.

So seeing Threads will be an interesting opportunity to share the experience again and chat between us about the film. It’s been lauded with praise and I know so many people think of it as one of the greatest pieces of British television ever.

It is. Do you think Threads helped change our views on foreign policy and nuclear deterrents?

I don’t think we learn from things and history tells us that. Mankind likes to wage war and you don’t see that stopping. Where does that leave us?

Nuclear weapons are still present and a threat — whether they’re there as a deterrent or falling into the wrong hands. We still seem to live on the edge of a cliff at all times, with leaders you can’t trust to make the right decisions. It’s scary stuff.

Nuclear war is everyone’s problem, it’s not just country to country. It’s a worldwide problem, we all share it, and that’s why it’s so frightening now. Since Threads was made I’m sure there have been advances in what nuclear weapons can do. I’m no expert, so the evening will be a great opportunity to open this up and discuss it.

Hopefully, everybody will join in and have a say about Threads, the aftermath and what we’re left with now.

Karen Meagher as Ruth and Reece Dinsdale as Jimmy in Threads. Credit: BBC.

How did you initially get involved in Threads?

I was doing well when I came out of drama school with some terrific roles, but when I look back, Threads was probably my big break on television.

I’d just done a play at the Royal Court Theatre Upstairs called Red Saturday, by Martin Allen — about professional football funnily enough — and a lot of producers and directors saw it. I remember on the very last night of that, which was a Saturday, I had to drive up to Sheffield from London to start shooting Threads on the Sunday morning.

I’d met Barry Hines and Mick Jackson, the writer and director, the week previously and I’d seen the script. It was obvious from the first read that it was extraordinary writing. But you never know how extraordinary it’s going to be. As a young actor, your agent sends you the script; you look it; you’re told it’s a kind of documentary drama…

I immediately thought I don’t want to be in a documentary — I didn’t understand that. But when I read it, I thought it was extraordinary. I then wondered how they could bring it to life, because it was well before all of the special effects we have now.

So, it started as just another job, then I realised it was special, met Barry and Mick and before you know it, the rest is history.

The format and style is innovative. There’s nothing quite like it.

Yes. The great thing about it was that Barry Hines wrote Kes, a film that spoke to me and was set in Yorkshire and was a sort of rites of passage story. It had everything, and here was a script by the same writer and I knew it was going to be good.

Years before, I was with my Dad who was an ex-miner, and we watched a two-part drama from Play for Today called The Price of Coal, which was penned by Barry. It was rip-roaringly funny and I remember us sitting down to watch the second part, ready to laugh our heads off — and there’s a mining tragedy. Of course, Barry had pulled the rug from beneath us, and it was the most shocking piece of drama you could imagine.

So you have this writer who is responsible for Kes and The Price of Coal, and you’re sent a script about a nuclear bomb going off in Sheffield. You know you’re in good hands.

But you couldn’t see how they’d achieve it on screen?

All the possibilities were there and I could see it in my head, but I wondered just how they were going to do it.

When you’re in the middle of making something you can’t always tell, as an actor, how they’re going to shoot it. The overall picture is someone else’s vision. But when I saw the finished piece, I thought it was incredible.

Of course, my character goes missing halfway through the film, so half of the filming I wasn’t privy to. All the post-apocalyptic stuff which Karen Meagher takes on I hadn’t seen, so I was far removed from what was to follow.

It’s a very brave decision to lose your main character halfway through a story – Hitchcock risked that in Psycho.

You’re following a character all the way through, and suddenly he’s dropped! You’re not given the satisfaction of seeing what happens to him, but you’re invested by that time in the character.

You want to know what happens, but you’re not told. I suppose the message is that’s exactly what it’ll be like — nothing will be tied up nicely because people will disappear.

So what do you think happened to Jimmy?

Who knows? He died, presumably. I have no more idea than anyone else, but that’s the point. That’s why it’s so clever.

It’s basically a tiny little story about two people who are about to get married and have a baby. We’re given that so we can identify with the situation, which is a smart piece of writing because you latch on to the situation and you want to see if they get their flat together and baby born, then suddenly the whole thing is blown apart. Quite literally.

Was Mick Jackson a supportive director?

He was terrific, kind and generous of spirit. I’d done a bit of television up to that point, but nothing of that size or impact. He was wonderful and very caring and talked through everything we needed to know.

Mick was wanting us to keep it real and be ourselves as much as we could. It fitted me to a T, as I’m a Normanton lad born-and-raised — Sheffield isn’t a million miles away — so the part fit like a glove. I didn’t need to go searching far.

In recent years you’ve been working very closely with Leeds Playhouse, with notable roles in (The Fall of ) The Master Builder and Untold Stories.

There’s so much up here to mine, which went hand in glove with [Artistic Director] James Brining who had just seen me play Walter Harrison in This House at The National. James had just taken over the Playhouse and told me I was part of the history, part of the building, and that I should be back doing things.

So I’ve been very honoured. Square Chapel and Harrogate Theatre have also asked me to be a patron, as have The Piece Hall. So many things collided at once to help me decide to immerse myself in work which was up in the north. I’ve loved it and long may it continue.

See Threads with a Q&A from Reece Dinsdale at Square Chapel Arts Centre on Sunday 2nd December 2018 at 7:30pm. Tickets cost £8, with an age restriction of 15+.

Read our five-star review of Threads