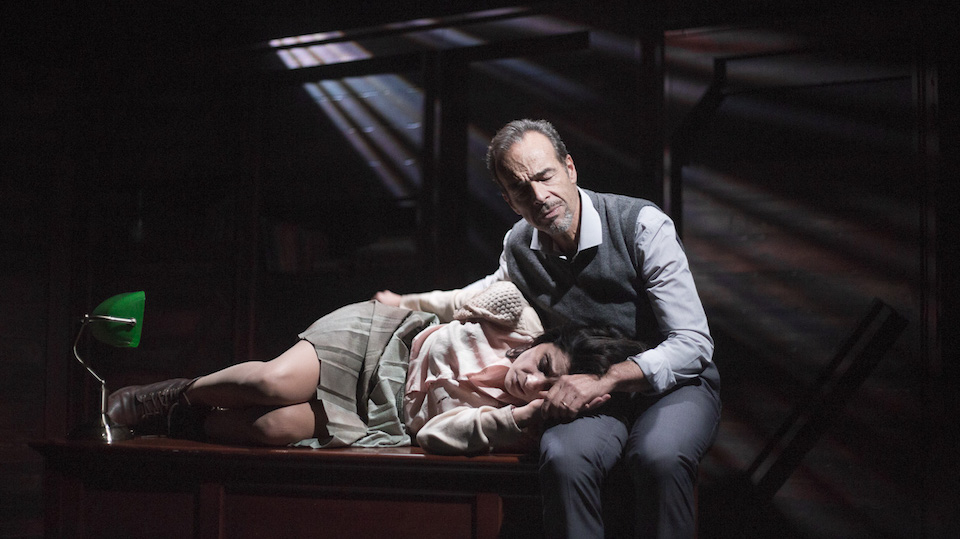 Primo Levi was an Italian Jew, a Chemistry graduate who, aged 24, was transported to Auschwitz in 1943. Against all odds, he lived to tell the tale. Levi wrote vivid, methodical first-hand accounts of his experiences in Auschwitz. Perhaps documenting his memories was an attempt to make peace with the torment. Drowned or Saved? explores whether, given Levi’s subsequent writings, and a lifetime plagued by depression, he ever truly escaped Auschwitz? He struggled to cope with the guilt he carried for his survival while so many others were slaughtered. His final work was a series of reflections on his experiences in Auschwitz, entitled The Drowned and the Saved.

This debut play by Geoffrey Williams explores Levi’s story and I always welcome new writing on a fascinating historical subject. Given Williams’ experience as a Director, he’s also directed the show, and there’s clearly a vision he’s been eager to translate from the pages of Primo Levi, via his own pen, to the stage. Problem is that, with limited cast, scarcity of props, and muddled scenes that leap frog between reality, memories and nightmarish hallucinations, the impact of the poignancy in Levi’s true story is, for the most part, entirely lost.

We are assumed to automatically invest our sympathies in a pensive Primo Levi (Marco Gambino), pouring over his papers, lighting cigarettes and avoiding food thrust upon him by fussing housekeeper Mrs Giordanino (Paula Cassina) who’s obviously a device to provide the light-relief. Cassina also plays Primo’s wife Lucia, and Vanda, who died at Auschwitz and is thought to be Primo’s first love. Yet the female roles serve mostly to attempt to cajole Levi into leaving his study. Gambino’s performance was lacklustre. Levi may have been a methodical man but his overpowering sorrow wasn’t tangible, his despair nothing more than pretence. The audience are repeatedly trapped inside Levi’s disturbing memories. Yet, there’s a disconnect between us and all the actors. The heavy subject matter is without question vital, enthralling and deeply emotive. Anyone watching this play cannot entirely fail to react, there are tender moments between Levi and Vanda on the train before arriving at Auschwitz, and a well timed lights-out monologue hits us hard. The darkness envelops us as the hollow hopelessness in Primo Levi’s evocative account immerses us in the terror of what it’d have been truly like to arrive at the death camp.

It speaks volumes that words floating in the pitch black were the highlight of the play. There’s much more that could be explored in Levi’s writings alone, and, clearly, a running time of an hour and 15 mins would never suffice. Williams’ reasons for penning this play are no doubt to pay respect to Levi’s story and ensure the atrocities are never forgotten – or repeated – but it simply does not hit home with the power that it should.

I’d accepted the prophet Elijah (Alex Marchi) appearing to hound Levi as somewhere between his conscience and his muse as a well-worn cliché. Until Marchi leapt between half a dozen characters. The pacing was off and, consequently, Marchi’s portrayal of Auschwitz commandant Rudolph Hoess was ineffective. Perhaps the chaotic scenes were intentional, so as to throw the audience out of kilter, reflecting the state of Levi’s mind but, if so, it’s an unsatisfactory excuse. The ethereal visits from a lame, heel-dragging Null Achtzehn (Eve Niker), gasping for breath began as unsettling but ended frustratingly over-egged. Despite this, we suspended our disbelief and considered Levi’s guilt for ignoring this nameless young man’s dying moments.

A touching final scene’s delivered, if a little clumsily, and the take home message remains striking. Never forget your humanity, your frailty, and that your freedom relies on those we trust to power. As political tensions rise and vile atrocities continue to occur worldwide, we are reminded that the Holocaust happened once and it could happen again. This painful truth just needed to be all the more bitterly portrayed with conviction, rather than simply painful to watch.