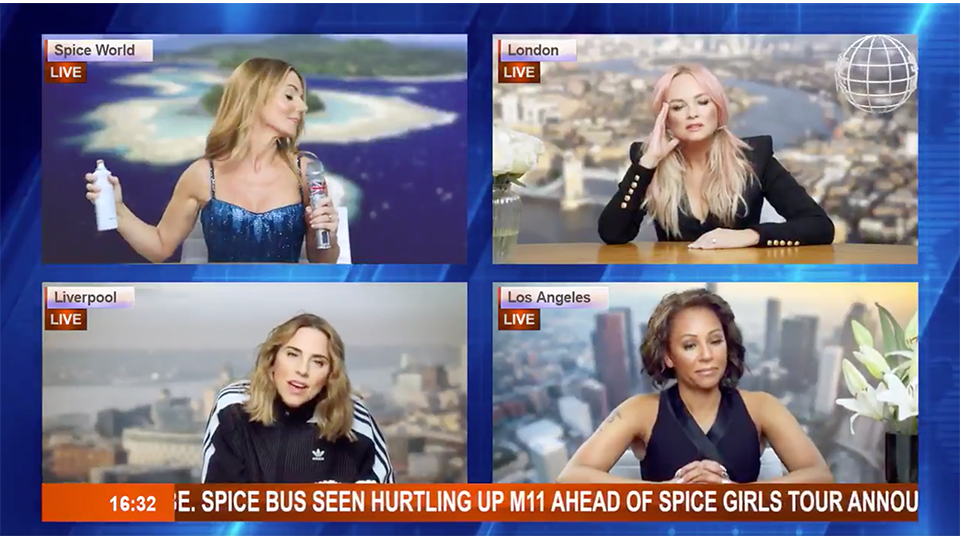 The official announcement is finally here! The Spice Girls are back together and heading out on a UK tour in 2019.

Melanie C, Geri Horner, Emma Bunton and Melanie B have announced the details of a stadium tour with tickets going on sale this Friday. The news was made official with the release of a news bulletin style video that debuted across the group’s social media channels at 3pm. You can watch it below…

In the video the four Spice Girls are seen chatting to one another from different live feeds in a news studio. There’s no mention of Victoria’s absence but the four that are present sing a bit of Spice Up Your Life after bickering over outfit choices.

The dates announced are:

Tickets for the shows will go live on Saturday at 10.30am and the group will be supported by Jess Glynne. You can get tickets from www.ticketmaster.co.uk and www.gigsandtours.com.

Rumours have been circulating for months that the group would be getting back together since they shared a photo on Instagram taken during a meeting at Geri’s house. It looks like Victoria Beckham will be playing no part in the reunion and she’s very vocally stated that she had no desire to tour with the group.

In a press release that accompanied the dates Victoria is quoted as saying, “Being in the Spice Girls was a hugely important part of my life and I wish my girls so much love and fun as they go back on tour, I know they will put on an amazing show and the fantastic fans past and present are going to have a wonderful time!”

This morning Emma Bunton struggled not to spill the beans during her Heart Breakfast Show with Jamie Theakston and a loose-lipped Melanie B revealed more than she probably should have on Loose Women.

The Spice Girls will appear on Jonathan Ross’ ITV talk show on Saturday night to talk about their reunion for the first time.