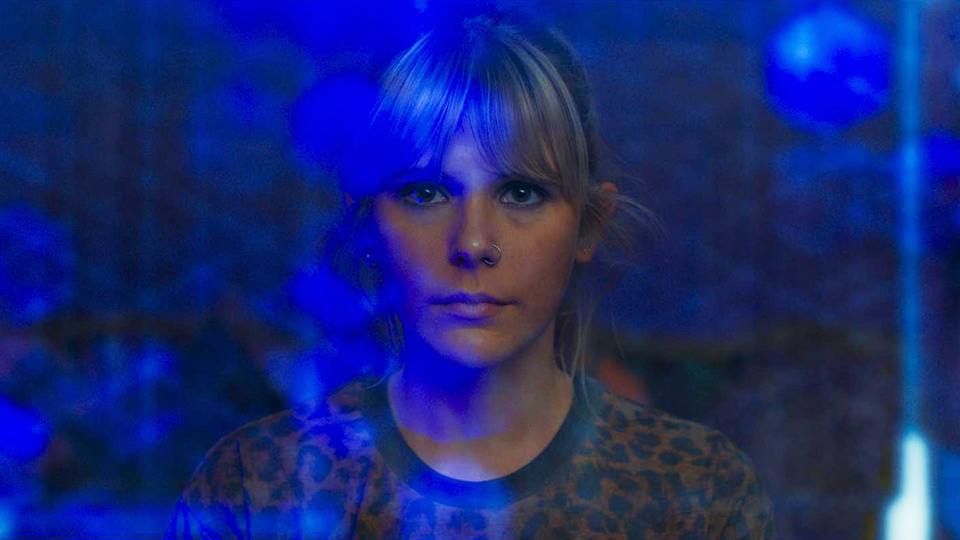 Literary sensation Bobbi Johnson (Hannah Arterton) is struggling to write her second book. After getting herself off drugs, Bobbi suffers writing block so her publisher suggests that she use a super computer with in-built editing software. Initially reluctant, Bobbi decides to give it a try but she has no idea just how much control the computer is going to have over her. As she attempts to hit her deadline, Bobbi also has to deal with her drug dealing ex Dylan (Elliot James Langridge) and a stalker who keeps delivering VHS tapes through her letterbox.

Peripheral is the latest film from director Paul Hyett and it comes just over two months after his last film Heretiks debuted at Arrow Video FrightFest over the August Bank Holiday weekend. Written by Dan Schaffer, the film is a sharp change in tone and direction from what we’ve seen Hyett do before. Set in the present day, most of Peripheral takes place inside Bobbi’s claustrophobic flat as she tries to find her mojo and get her second book on track. It’s established early on that her first book, which she wrote while high on drugs, resonated with her young audience and sparked a movement, something that she has mixed feelings about.

Once the computer is in her house, Bobbi is monitored by her publisher and the machine sends pages directly to them without Bobbi’s knowledge. It also possesses the ability to ‘improve’ what Bobbi is writing from changing the protagonist to polishing up her prose to make it more mainstream and marketable. Bobbi quickly becomes irritated with the new computer in her home and she’s side-tracked from her writing by her ex who turns up asking a big favour and her stalker who turns up frequently.

What happens in the film’s second half will test how left-of-centre you like your films to be. What transpires on screen takes a turn for the bizarre as the computer sinks its teeth into Bobbi, and honestly it did lose me a bit. There’s a lot of stuff on screen that happens and is supposed to be a metaphor for Bobbi becoming consumed by her writing. Some of it I was on board with, some of it I found a little too bizarre without giving too much away. I certainly haven’t seen anything like it before.

At the centre of the film is a strong performance from Arterton. She’s worked with Hyett before and that shows on screen. I can’t imagine an actress trusting some of the material Arterton has to deliver without having a good relationship with the man orchestrating it all. She commits fully to Bobbi and she’s compelling to watch. Even in the film’s weirder moments, Arterton keeps you on the side of her character. There are small roles for legendary screen stars Tom Conti and Jenny Seagrove, as well as solid support from Elliot James Langridge and Rosie Day.

Peripheral is a much, much better film than Heretiks but it will likely alienate some viewers with its bizarre twists and turns. I preferred the first half to the second but the conclusion left me feeling satisfied. The film is mostly carried by Arterton’s marvellous turn as Bobbi and it definitely has plenty of ideas that it tries to bring forward. Both a meditation on the trappings of success and society’s addiction to technology, Peripheral has a clear message but it sometimes gets a little too bogged down with the bizarre.

PERIPHERAL from FrightFest on Vimeo.

Peripheral will be released digitally in the UK and Ireland on 3rd August 2020 by Blue Finch Film Releasing.