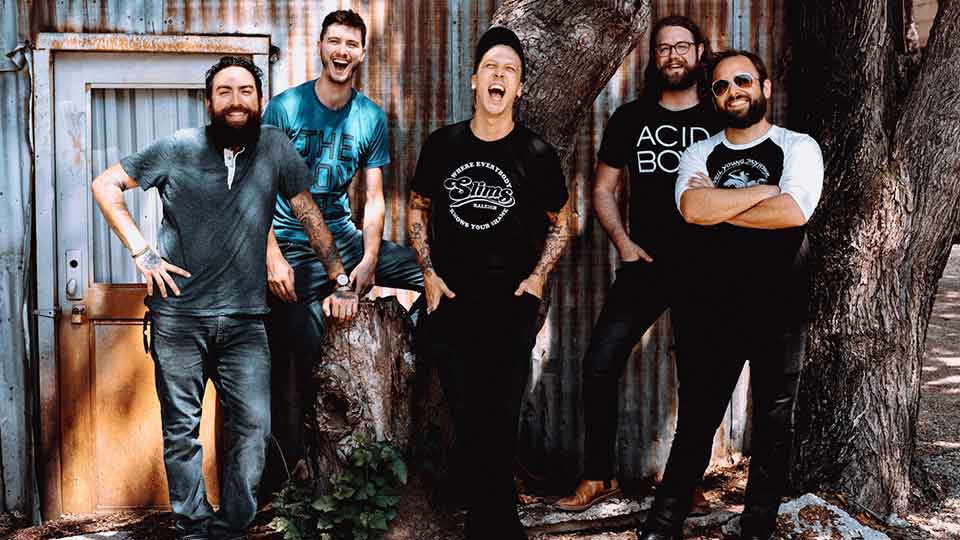 It’s safe to say the last few years have been a rocky ride for American Aquarium. After the success of their albums Burn.Flicker.Die and Wolves, in 2017 the lineup disbanded, leaving frontman BJ Barham as the sole remaining member. Not to be dissuaded, Barham brought together a brand new set of bandmates and made this year’s critically acclaimed album Things Change. To promote the record, the band have been on a short tour of the UK, culminating in a show at London’s Borderline.

Arriving on stage shortly after 8.30, the five-piece kicked off their set with The World Is On Fire, the opening track on Things Change. It had a much more rocky, bluesy feel compared to the album, which paired brilliantly with Barham’s gravelly vocal and the balance of despair and determination in the lyrics. The band could be seen jamming together throughout and there were some lovely harmonies between Barham, bassist Ben Hussey and guitarist Shane Boeker.

The set spanned the band’s wide-ranging career, with a mixture of songs from their last five albums and selections from Barham’s 2016 solo record Rockingham, and they struck the ideal balance between more uptempo songs and slower numbers. Tracks such as the pulsing honky-tonk vibe of American Tobacco Company, the 70s rock feel of Ain’t Going To The Bar Tonight and often brilliantly married vivid storytelling and detailed imagery with irresistibly catchy melodies. Meanwhile, the likes of the subdued yet hopeful Man I’m Supposed To Be, the philosophical, confessional Wolves and Lonely Ain’t Easy brought out a yearning, emotional feel that delivered an incredibly powerful experience. They made flipping between different sounds and moods look completely effortless and kept the energy up throughout.

One thing which really surprised me was BJ Barham’s vocals. He truly came alive on stage, running the gamut from sneering on the driving Tough Folks and soulful on Katherine Belle to almost yelling on Jacksonville, which married stark, desolate lyrics with stomping drums. It created a real feeling of passion and conviction that added another layer to the show. Highlights for me included the bittersweet Casualties with its husky vocals and rich imagery, the resigned, lonesome Betting Man – where the acoustic arrangement allowed his voice to shine through – and fan favourite Losing Side of Twenty-Five. Barham also came across as incredibly open and honest, talking about his sobriety before the vulnerable, stripped-back One Day At A Time and his Southern Baptist childhood in the powerful, heavy rock song Crooked And Straight.

The band closed their set with a toe-tapping, tongue-in-cheek cover of John Prine’s Sweet Revenge before playing Rockingham, the title track from Barham’s solo album. He really embodied the characters for me and I liked the edge to his voice, as well as the laid-back feel. There were huge cheers and applause at the end of the song and it’s clear that they’re very much loved by the UK crowd.

After demands for ‘one more song’ from the audience, Barham returned to the stage alone with his acoustic guitar to play Unfortunate Kind, which had a soft, lilting feel and was full of lovely sweet vignettes that tugged at the heartstrings. Before performing the song, he talked about how he’s played this venue all three times he’s been to London and the crowd has grown from 10, to 30, to ‘more than 30’. He then brought the rest of the band back on stage for the ‘rock and roll song’ Burn.Flicker.Die., from their 2012 album of the same name. It was a fiery, intense finale with thrashing drums, growling vocals and a dramatic ending that left the crowd calling for more.

Overall American Aquarium delivered an excellent performance which provided a great introduction to their sound and brought Barham’s brilliant lyrics to life. The 90-minute set flew by and they had fantastic chemistry on stage, with Barham frequently breaking off to jam with his bandmates. Before performing Unfortunate Kind, Barham talked about the colloquialisms used to describe the band’s performances on this tour – in Bristol it had been ‘brilliant’, whilst in Manchester it was ‘smashing’. I’d like to add another one: absolutely outstanding.