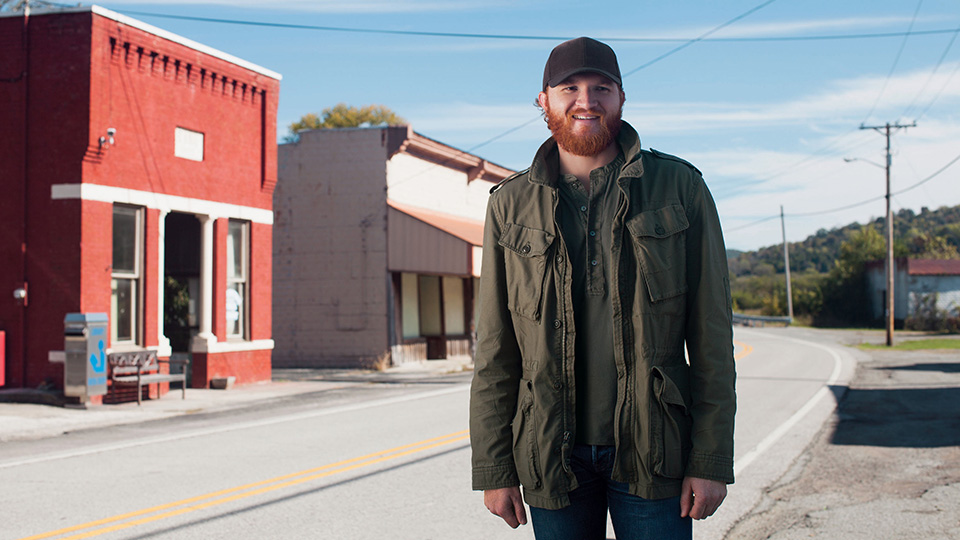 Eric Paslay released his debut album in 2014, scoring hits with his singles Friday Night, Song About A Girl and She Don’t Love You. However, he’s also the prolific songwriter behind some of the biggest hits in modern country music, with Jake Owen, Rascal Flatts and Eli Young Band all recording his songs. In recent years he’s become a frequent visitor to the UK, and last night he made his return to London’s Borderline for a sold-out show as part of Country Music Week.

Paslay arrived on stage for his acoustic solo set to huge cheers from the crowd, before launching into Keep On Falling from his debut album. The upbeat, rock-influenced song showed off the richness and depth in his voice really nicely and I liked the details in his lyrics too. He also hit some impressive notes on the chorus and got a roar of approval from the audience at the end.

Throughout the performance Paslay delivered tracks from his album as well as those he’s written for other artists, such as Barefoot Blue Jean Night (made famous by Jake Owen), Even If It Breaks Your Heart and a soaring rendition of Rascal Flatts’ Rewind. He also threw in a couple of new tunes, such as the anthemic Live On and the emotional ballad I Would’ve Said Goodbye.

However, what pulled the whole thing together were Paslay’s brilliant vocals. By turns soulful, rocky with a gravelly edge and a touch of Texas drawl, his voice rang out through the Borderline and made it feel like a venue twice the size. He also showed off some impressive guitar playing, particularly on Don’t Wanna Lose Your Love (which he dedicated to his wife) and a rattling flourish to finish his version of Angel Eyes, a song he wrote which was recorded by Love & Theft.

One thing which particularly struck me about Paslay’s performance was his versatility. He’s just as comfortable performing uptempo, rocky songs such as the driving Song About A Girl, the fun and swaggering High Class and laid-back, summery single Young Forever as he is with slower numbers like the raw and yearning Amarillo Rain and She Don’t Love You, a heartstring-tugging ballad which brought out the bluesy tones in his voice. I also liked how he seamlessly blended his own songs with a selection of covers, whether that was his raw, haunting combination of Never Really Wanted and Wicked Game or the jaunty, rollicking mix of Here Comes Love and On The Road Again. It really showed off his wide range of influences as well as his ability to make a song his own.

One of the standout moments for me was Deep As It Is Wide, which Paslay performed after a fan requested him to play his favourite of his songs. He told a very moving story about getting his big break before starting the gentle lilting tune. The song built to a powerful chorus, allowing Paslay to highlight his excellent control, and his passionate vocals were full of conviction. He brought the song’s vivhid imagery to life and you could see it meant a lot to him, which made for a very affecting performance.

Paslay closed his set with his US top 5 hit Friday Night. The song gave him a chance to rock out, showing off his smooth vocals as he rattled off the quick-fire lyrics. The crowd sang and clapped along throughout, cheering when he mentioned London, before chanting for an encore as it came to an end. He then returned to the stage to perform the hopeful, compassionate Less Than Whole, which he mashed up with Amazing Grace and showed off some impressive vocal runs. Finally, he brought supporting act Fairground Saints back out on stage for  a rousing rendition of Tom Petty’s classic Free Fallin’ (accompanied by a dancing skeleton!).

Overall Eric Paslay delivered a jam-packed, entertaining set which ran the gamut from soul and blues to country, rock and pop, backed up with fantastic vocals, great storytelling and slick guitar playing. Additionally, he kept the crowd’s energy up throughout, regularly checking they were having fun and cracking jokes with them. It’s not hard to see why audiences here love him – even if at times he couldn’t quite believe it himself. Although there were perhaps one too many covers for my liking, overall it was a great show. I’m already looking forward to him coming back to support Old Dominion in November