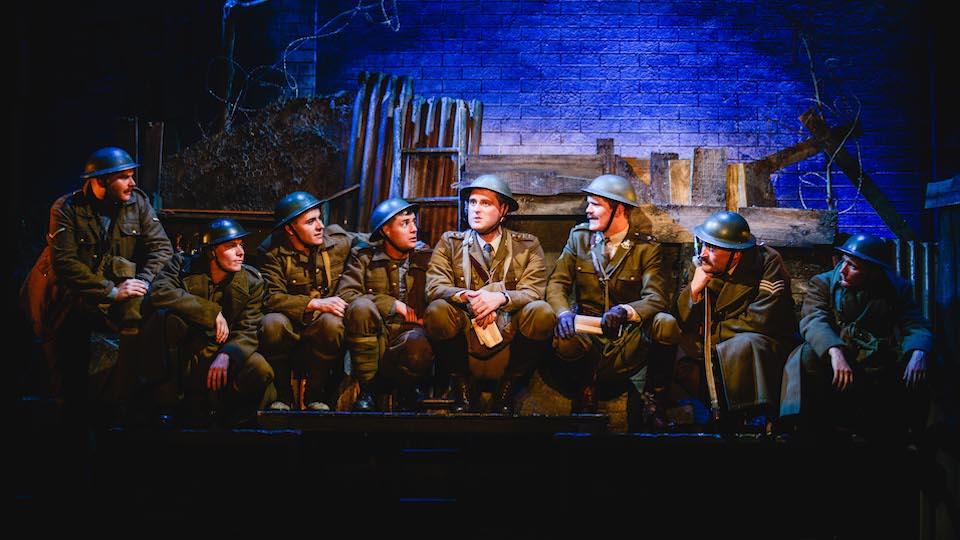 Gallows humour abounds in this cleverly paced true story of how the Western Front came to be papered with satricial newspaper The Wipers Times. Exemplary direction and stage design with meticulous attention to detail, combined with exceedingly likeable performances from a stellar company, make this an unmissable production.

In a bombed out building during the First World War, in the Belgian town of Ypres (mispronounced ‘Wipers’ by British soldiers), two officers – Captain Fred Roberts (James Dutton) and Lieutenant Jack Pearson (George Kemp) – discover a printing press. With the help of their civvy-street printer Sergeant Tyler (Dan Mersh), they produce The Wipers Times to circulate among the troops. Far from being a grim journal detailing life in the trenches they produced a resolutely cheerful, subversive and very funny newspaper designed to lift the spirits of the men on the frontline.

While defying enemy bombardment, gas attacks and the disapproval of many of the top Brass, the 24th Division of the Sherwood Foresters produced 23 issues of The Wipers Times amid the dank, rat-infested trenches which inspired much of the tongue-in-cheek content. It really is astonishing and inspiring to witness the humble tale unfold as war rages on. The resilience of the human spirit in the face of adversity is precisely what The Wipers Times managed to communicate back in 1916, and the significant impact of their achievement before it vanished as less than a footnote in the history books is portrayed on stage without being glib or over the top (for want of a better phrase). Interspersed with comic sketches, Musical Hall spoofs and songs from the vivid imagination of those on the front line, this show pays playful homage to the ordinary men who endured the harshest of conditions For King and Country.

Private Eye editor Ian Hislop, together with co-writer Nick Newman, had been pitching the idea of a film about this remarkable yet somehow forgotten story nearly 15 years ago. They were rather disgracefully told, ‘No-one is interested in the First World War’. Thankfully, they were undeterred and, in 2013, The Wipers Times was commissioned by the BBC as part of its 2014 Great War anniversary programming in a BAFTA nominated film starring Michael Palin and Ben Chaplin. Hislop and Newman’s respect for the source material shines from the script and they were determined to see the story of Roberts and Pearson’s rebellious rag brought to a theatre stage in further tribute to their legacy. The production’s current run coincides with the commemoration of the end of World War One. At 11am on 11th November 2018 it will be one hundred years since the whizz-bangs ceased and so too ended The Wipers Times.

My only complaint is that the female roles, Madame Fifi (Clio Davies) and Kate Roberts (Emilia Williams), are somewhat two-dimensional and feel shoehorned in, as with most pieces of drama depicting this period. The fight for women’s right to vote is granted nothing more than a dismissive, passing nod between Captain Roberts and his obedient, rather bland wife Kate. Understandably, covering the topic of women’s suffrage would require another play altogether and this is a male story but still, if you’re going to mention it, why not afford it a little more attention?

So often historians remind us of the futility of the Great War but, rather than dwelling on the death, destruction and depressing truth, it is the human tale of trust, laughter and boozy camaraderie that rings in our ears as we leave the Arts Theatre to return to our comfortable existence. The Wipers Times is a fine tribute to the group of men whose silly satire survives them, and the countless thousands who laid down their lives to ensure future generations would be entitled to live in freedom. Lest we forget their sacrifice, nor our sense of humour.


Watch the trailer below: