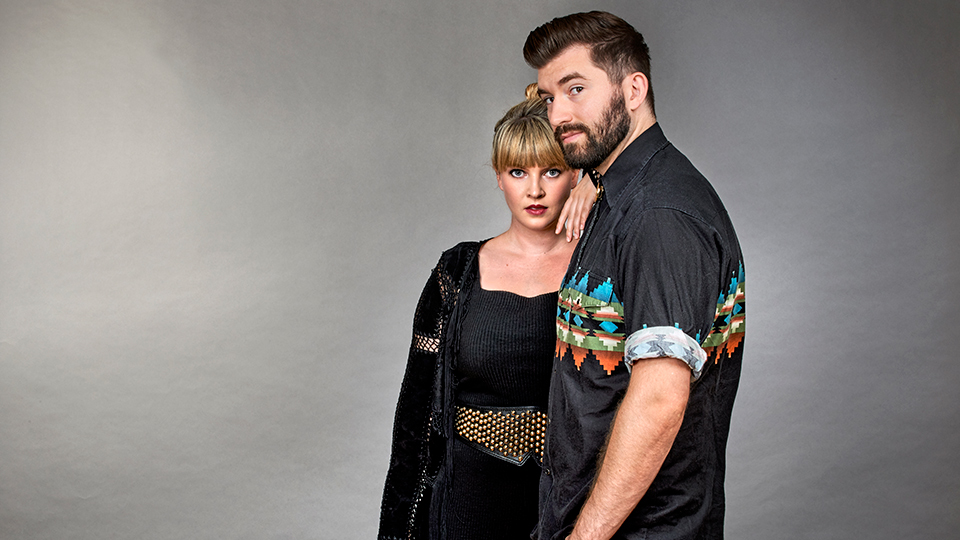 Two Ways Home have established themselves as one of the leading acts on the UK Country scene over the past few years.

Having released several EPs and singles, Two Ways Home – Isi and Lewis – have decided to make their debut album. In order to fund the project, they’ve launched an Indiegogo campaign and they need your help!

I caught up with the band to discuss the campaign, find out more about their debut album, and talk about the fast growth of Country music in the UK.

Hi guys. How are you doing today and where does this Q&A find you?

Hi, we have just gotten back from Vienna, where we were recording some vocals with a great producer called Thomas Rabitsch. We are in full swing of producing our debut album.

You just announced a crowdfunding campaign for your debut album. Why did you decide to go down that route?

As you may know making an album can be pretty costly. Something people forget is how much more goes into making an album from artwork to PR to getting radio pluggers etc. We thought a crowd-funding campaign would be the best way to raise funds and get our fans, friends and family involved and would also give us the opportunity to share the process as well as offering them something in return. By using IndieGoGo everyone has the opportunity to help with as little as £10 which then increases depending on how generous you are feeling and what perk is ideal for you.

Here is the link to check it out:

For fans that donate to the campaign, you’re offering a variety of perks. What kind of things can people get for their contribution?

There are some really fun perks like hand painted ukuleles, or having a song tailor-written for you or a loved one. As well as house concerts or the merchandise package that includes a T-shirt, guitar pick, physical CD, poster and hand written thank you note. Or if you want to keep it simple the signed CD option might be for you. Some of the perks are pretty exclusive, so there are only a limited amount available, which is nice as you know that you will be one out of a few that will have that Two Ways Home item and when we get super famous, you will know that you helped us at the very beginning ;).

You’ve already started work on making the album. What can you tell us about the sound and direction?

Most of the songs are written and we have demoed some of them already. In terms of sound and song writing we are definitely drawing some inspiration from a mix of the Eagles, Mumford and Sons and Fleetwood Mac with a modern twist. There are songs which will sound quite poppy but then we also have some songs which are more reminiscent of the old school singer-songwriter style. Production wise we are wanting to push the boundaries a little, it’s sometimes hard to find the balance between new very innovative sounds and staying within the Americana/ country realm. But we feel like our harmonies pull us back into a more classic country sound. We set out to make good music and write interesting-catchy songs and we believe it will be a very interesting first album.

People always say that you have your whole life to write your first album. Will these songs be all-new or are you looking through your catalogue and choosing the best songs to include?

We thought about this for a long time and came to the conclusion that we would like it to be all new songs. So unless we come up with a magnificently different approach to one of our older songs the album will consist of all new tunes.

Give us a little insight into your writing process. How do you get a song together?

This is always different but more often than not a song starts with one simple idea, this can be a phrase, a guitar lick or even just one word, which has caught our attention and then you go from there and it develops naturally. It’s like a muscle that needs to be worked and with time your writing gets stronger and you know your strengths and can get better at your weaknesses. Some of the songs on the Album will be co-writes, which are always fun to do, but some will be songs that we have written just us two. These songs are often more vulnerable as we can be brutally honest with each other without hurting any ones feelings.

You’re very active on the live scene. When can your fans see you performing before the end of the year?

We run a writers round at the Colonel Fawcett in Camden. The next and last one of the year will be on the 1st November.

We also have a little duo show on the 2nd of December in Bishops Stortford and will be at the new and refreshed Bedford in Balham on the 4th of December.

But something we are most excited about is our show on the 10th of November at Nash Nights (Under the Bridge) as this will be a full-band high energy show. We will also be showcasing two totally brand new songs that will be on the album, so this is definitely not to be missed.

Country music is really gaining traction in the UK and you’re one of the bands that has been important in that movement. What changes have you seen over the past couple of years?

Well, we are flattered that you think so. To be honest we didn’t set out to be a country band but our writing and harmonies drew us in that direction and we are very happy to be placed among the great country acts emerging and thriving in the UK. We started playing “country music” in 2010, so quite a while back and then we flew to Nashville for the first time in 2012 after one of our American friends suggested we check out the scene over there. Since then the UK scene has really grown and developed and it seems that people are now opening up to more types of country/Americana music. It seems that there are so many more facets to the genre now and the new more modern country sound is seemingly winning over new fans in the UK, which makes things like C2C: Country to Country festival so popular.

Something we do strongly believe is that we need to invest in home-grown bands if we want to grow the UK-country scene. It is amazing that more and more people are liking country music now that they have discovered it’s not all about stetsons and cowboy boots and it is great that it has started to expand from the stereotype often portrayed in the UK. This gives a great platform for American artists to come over and sell out relatively big shows, which is great, but we need to remember that there are UK bands who are also very good at what they do. In some way we have created a little sub-genre, which some may know as UK-Country. We feel this includes all the bands that have a country tinge and probably take some influence from the American bands and sound that is so popular over in the US but still stay true to their roots. Singing about things that we relate to and writing songs that are authentic to our own experiences.

What would you say have been the biggest hurdles as independent artists?

As we are totally independent at the moment the most challenging thing is to find enough time to do everything from booking shows to organising interviews to finishing the album to writing press releases to actually sitting down and writing new songs and playing music. Financially it can also be quite tough, but we are in it for the long haul and we just love performing and writing songs so you keep going and you find the time and the means to continue on your journey and hopefully you can grow your community along the way.

With Christmas on the horizon, what are your plans for the festive season?

We are going to try and relax and drink some mulled wine and go to a few Christmas markets, but the reality will probably look more like; writing, recording, booking festivals for next summer, just working hard, even harder then before so this debut album gets finished and is the best it can be and gets heard by as many people as possible. As you may have gathered we are super excited for this new chapter and cant wait to see what will happen next.

If you want to keep up to date with all our going-ons come and join us on social media:

To get involved with Two Ways Home’s Indiegogo campaign head over to https://www.indiegogo.com/projects/two-ways-home-debut-album#/.