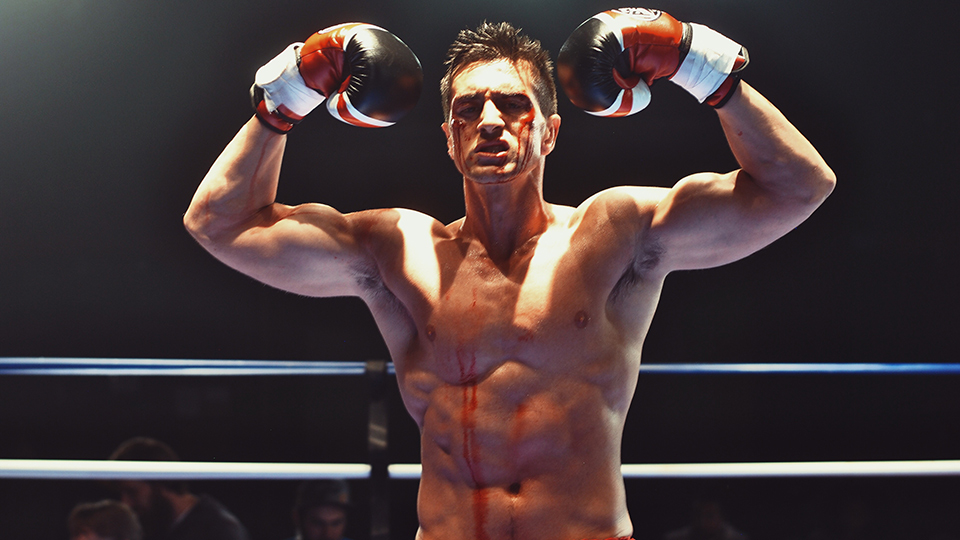 Boxing champion Travis Austin (Lee Kholafai) is on top of the world until his life is turned upside down when tragedy strikes during a celebration party. Taking responsibility for what happened and covering for his friend and sparring partner Joe (Brandon Sklenar), Travis is sentenced to two years in prison. When he gets out of prison, Travis discovers that he’s lost everything including his girlfriend Dana (Korrina Rico) and has to start from the bottom to work his way back to the top.

Glass Jaw is essentially the exploration of a man who loses everything and how that affects him as he tries to put his life back together. Set against the backdrop of the boxing world, the film attempts to be a gritty real-life drama, something it doesn’t wholly succeed in achieving. The relationship between Travis and his father Sam (Jon Gries) is explained at the start of the film, showing the volatile nature of their father-son dynamic. It’s a little bit of a clunky set-up to basically emphasise that Travis overcame adversity to get to the top of his profession.

The prison part of the film felt a little rushed over for me. I thought the film could have spent a little more time there to dissect the effect that the experience had on Travis. Instead it serves to move the plot along before Travis is released back into the world. As is to be expected, his entry back into normal life doesn’t go smoothly and for me, that’s when the film really started to find his feet. Travis realises that those he trusted haven’t particularly stuck by his side and he’s forced to see the impact his decision had on his girlfriend Dana.

From that point on, Travis has to pick himself up, get a low-level job and start to earn back the respect of his industry, and the people he’d surrounded himself with prior to his stint in prison. The main issue I had with the second part of the film is that it follows a very familiar redemption formula. Glass Jaw doesn’t really offer anything new, instead ticking the boxes to make sure that the tropes are all there. That makes the film predictable, which is a shame as there were moment when it could have taken some unexpected turns.

The acting is a mixed bag. Lee Kholafai, Brandon Sklenar and Korrina Rico are all good in their roles. Of the three it’s Sklenar that leaves a lasting impression as Travis’ wildcard best-friend Joe. He’s able to flip from nice to nasty with ease, and he does a great job with his character. Jane the Virgin star Jaime Camil on the other hand is pretty awful as Travis’ lawyer. I actually got the impression he was reading his dialogue, which made his performance very stilted.

Glass Jaw is an enjoyable watch that has a few issues along the way. For a film about boxing, there’s disappointingly little actual boxing in it. The moments where we do see Travis boxing are some of the movie’s best and I would have liked more of those. The predictable and formulaic story lets the cast and the director down but it does still manage to hold your attention regardless. Glass Jaw is the kind of film you could enjoy at home when you want a quiet evening but it’s unlikely to leave a lasting impression.