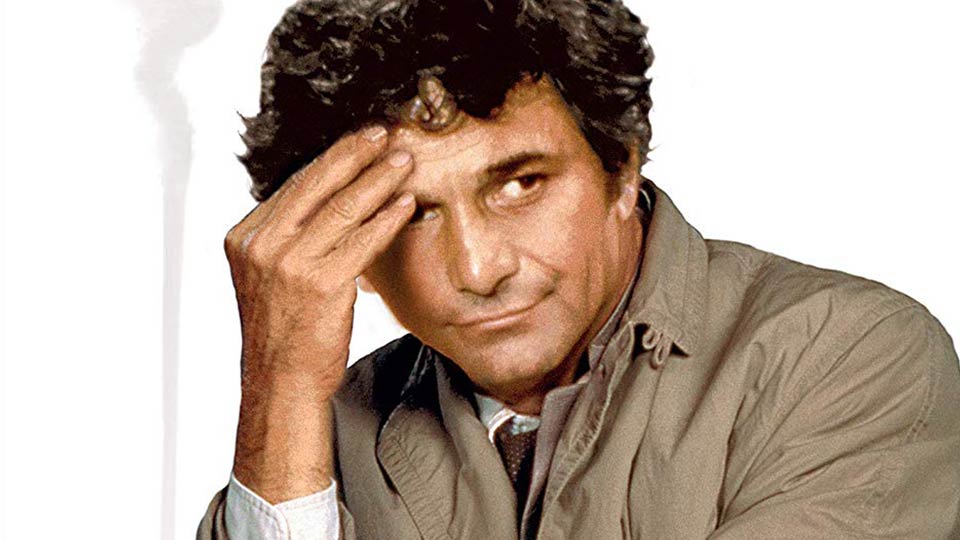 Columbo is an iconic detective series that almost everyone has heard of, even if they were born long after its 1970s heyday. Its longevity can be put down to an appetite for repeats, which has introduced the show to successive generations of fans, and its continued influence on the public consciousness – the shabby raincoat and cigar, plus the “Just one more thing” catchphrase remain staples of our collected cultural psyche (though don’t listen out too keenly for the last one in this title).

Columbo – The Complete First Season takes us to the origins of the series that made an international star of Peter Falk. Before it became a much-loved long-running detective show, it had a slow gestation period, going through a few pilots before a full series was commissioned. This three-disc Blu-ray release contains the seven episodes of the first season (1971/72), plus the two pilot episodes from 1968 and 1971.

For a series that would win many awards over the years, not least three Emmys for star Peter Falk, Columbo certainly hit the ground running, establishing itself as a well-produced and sharply-written show from the outset.

Part of the appeal is its complete subversion of standard detective series tropes. Lieutenant Columbo isn’t a hard-hitting cop with a troubled private life – he’s amiable and reasonable, and his wife remains an off-screen character – something that would go on to become a long-running joke. Nor does he have a lower-ranking buddy to spar with and explain the plot to – instead the audience is denied access to Columbo’s detection process and ingenious mind until the final revelatory scene where he reveals his trap for the suspect. Most significantly, each episode generally opens with the killer committing the murder, subverting the standard genre tactic of keeping the audience guessing about the identity of the murderer to retain suspense. Instead, the suspense is entirely driven from wondering how on earth Columbo will get his man/woman, and how he will unravel what often look like craftily covered-up murders. Remarkably, all of the efforts to turn the genre on its head pay off and turn Columbo into a unique cop series that survives, indeed thrives, on inventing and sticking to its own rules.

In the absence of a buddy, the chemistry in Columbo that drives the drama is built around the interplay between the detective and his prime suspect. This requires a high standard of guest artist to play the criminal in every episode. The two pilots reveal the potential of the show with great confidence. In Prescription: Murder, Falk squares off against Gene Barry, who plays a cold, cunning psychiatrist, who has murdered his wife and persuaded her young actress replacement to imitate her to give him a false alibi. When Columbo can’t make the icy Barry cave under pressure, he uses a touch of lateral thinking to set a trap – another signature of the series. Ransom for a Dead Man introduced the first female killer, played by Lee Grant – Columbo was ahead of its time in offering equal opportunities for the sexes in being both murderer and victim.

Of the seven episodes comprising the complete first season, which established a 75-minute running time per episode, most are strong and thoroughly entertaining. The first, which features a charismatic performance by Jack Cassidy as an author who sees off his writing partner but runs into trouble thanks to a female witness who is a fan of his work, is directed by Steven Spielberg, no less. Robert Culp makes the first of his three performances as the main guest in Death Lends a Hand, in which his anger issues lead to the death of a client’s wife, which he tries to cover up. In Dead Weight, even Columbo is reluctant to consider a retired war hero (Eddie Albert) guilty of murder, until he can’t shake off an unreliable witness’s doubts.

But there are also a few weaknesses in the initial run. Both Ross Martin and Kim Hunter give large performances that almost send up the otherwise intriguing Suitable for Framing, while the script for Lady in Waiting, to be truly compelling, needed to make the killer, played by Susan Clark, much more of a femme fatale. Such flaws would be ironed out as the series hit its peak in the mid-1970s and achieved a state of near-perfection, but as a collection of stories, they are, despite a few reservations, pretty strong, and even the weaker instalments have their merits and entertain the viewer.

It would be a huge oversight to review Columbo without a word about its star. Peter Falk’s creation is a work of genius, and integral to the show’s success. In Columbo, Falk brought to life one of the most memorable characters, let alone detectives, that television drama has ever seen. His personality is like that of Claudius, the Roman emperor who pretended to be an imbecile simply to survive the bloodthirsty reign of Caligula, who spared his uncle because he perceived he was no threat. Columbo’s affable, bumbling, apparent disorderliness and absent-mindedness is entirely a front to his true nature, which is cunning – always three steps ahead, like a chess player. He uses his bluff to lull his prime suspect into a false sense of security, inviting a single indiscretion which will inevitably lead to their conviction. Columbo is an observer of human nature. He figures his targets’ weaknesses – perhaps it’s pride, or sentimentality, or misplaced trust. In one instance, Columbo knows that they would never have been able to part with the murder weapon, purely through assessing their psychology. Watching Falk lead the viewer through each case is a thrill. The brilliance of his performance cannot be overstated. He even turns his hand to directing for Blueprint for Murder: though that was to prove to be a one-off (shame, as he makes a good fist of it, sparring against Patrick O’Neal).

Recorded in and around Los Angeles, Columbo is shot on film and looks and sounds magnificent on high-definition Blu-ray, especially since it has been fully restored for this release. We hope this leads to further seasons of this remarkable and evergreen series being restored and made available in high-definition. At its best, Columbo remains perfect entertainment. Dip in at the start. You’re in for a treat.