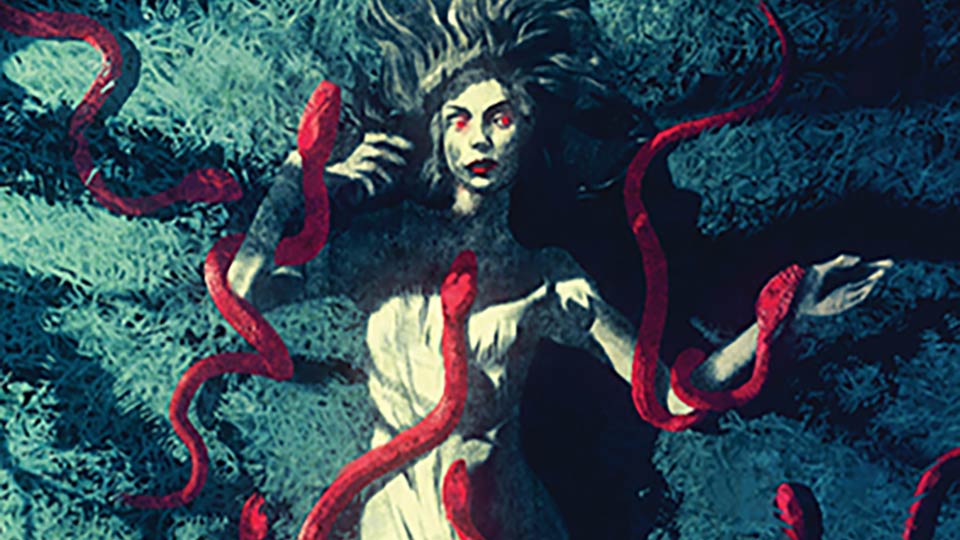 The Folio Society’s The Folio Book of Horror Stories, edited and introduced by Ramsey Campbell, illustrated by Corey Brickley, is available exclusively from www.FolioSociety.com.

It’s that wicked time of year when churchyards yawn, hell itself breathes out contagion to this world, and the god-fearing scuttle to the safety of their beds once night falls each ever-shorter day. Hallowe’en, once the preserve of our neighbours to the west, is now firmly ensconced in British autumn tradition, too. The good thing is, we get to keep the ghost stories running until Christmas, when we wheel out the things that go bump in the night all over again.

In time for Hallowe’en, The Folio Society has released a nerve-shredding collection of classic horror short stories encompassing nearly two centuries of tales from the best-loved authors of the genre. Fifteen stories: fifteen authors, told chronologically from 1839 to the modern day. If you’re a fan of horror fiction, there’s a good chance your favourite author is here. It’s also a great way to dip into writers whose work you may not know, and find others whose vivid imaginations will give you nightmares.

The Folio Book of Horror Stories runs the gamut of our fears and psychological responses to the unknown. A sense of displacement and alienation runs deep in many of these stories – that uneasy dream-like feeling of being a long way from home and in a situation you can’t control. Death, of course, plays a leading role throughout the collection, but so too does ageing, loss of cognisance, sexual repulsion, haunted rooms, strange hosts… one by one the stories tap into your darkest dreads, giving them expression, forcing you to safely confront them. Take a pew after sundown, lower the lights, make sure you’re alone, and it’s wet and windy outside, and start to read…

The original master of horror starts proceedings, with perhaps his most famous work. I’d never read Edgar Allan Poe’s The Fall of the House of Usher before, so it was a fantastic opportunity to remedy that omission. The sense of unease and suspense that he creates are what make the story so effective in creeping out the reader nearly two centuries after it was written. The narrator spends some time with his highly anxious and eccentric friend, Roderick Usher, whose sister Madeleine is gravely ill, and who apparently dies during his stay. Usher is convinced his life is connected with that of his crumbling house. Only a few pages of verse that interrupt the flow of the prose offer the reader respite. A modern editor would cull them.

The next story brings in the first female author – The Yellow Wallpaper by Charlotte Perkins Gilman was published in 1892. It’s commendable that this anthology splits the selected stories fairly evenly between the sexes, especially considering horror is a genre generally dominated by male authors. More contemporary female authors include Margaret St Clair and Shirley Jackson. The latter’s 1965 story The Bus exploits the fear of being lost in an unknown land. In this instance, the protagonist, an old woman called Miss Harper, falls asleep on a bus and misses her stop, and is then asked to alight by the irritable driver. A simple premise, and the seeming ordinariness of the set-up shifts almost imperceptibly into the arena of the strange and the uncomfortable.

Liverpool-born author Ramsey Campbell provides Again, his 1981 story set in the North West of England. When a young man tries to help an old woman back into her home, he finds himself trapped inside, and unable to find the key to release the door. Meanwhile, the lady he’s helping reveals herself, in more ways than one, to have a sinister side, and her house holds some hideous truths. Using our fears of ageing and sexual disgust, Again is certainly one of the most visceral and nauseating of tales in this collection.

The Folio Society’s The Folio Book of Horror Stories, edited and introduced by Ramsey Campbell, illustrated by Corey Brickley, is available exclusively from www.FolioSociety.com.

This anthology also contains two of the best-known horror writers: MR James and Stephen King. The former’s Count Magnus, from 1904, takes some of its cues from Bram Stoker’s Dracula, and sees a travel writer journey to Sweden (once again removing the protagonist from their familiar surroundings) where, staying amongst local people, he researches the ancient tales of the wicked deeds of one Count Magnus. Hammer Horror films would later borrow heavily from that kind of plot type. You can see our review of The Folio Society’s Ghost Stories by MR James for more of his spine-chilling work. The most popular and acclaimed living horror author is certainly Stephen King, whose many novels have been adapted as big screen Hollywood spectaculars, including this short story, 1408. As King explains in a short introduction, it was a tale he never intended to tell, but it’s his take on the haunted room at the inn of folklore. What happens when a sceptic writer of the paranormal stays in a room at a hotel closed off from guests after one too many unexplained deaths? If you’ve ever stayed in a hotel room and wondered how many others have slept in the same bed, and if they all made it through the night alive, then you get the primal fear King captures.

The Folio Book of Horror Stories is blood-red cloth-bound hardback and red slip case. It contains seven full-colour illustrations by Corey Brickley. It’s perfect for this time of year, and for the tradition of sharing scary stories with those you love. This anthology comprises: