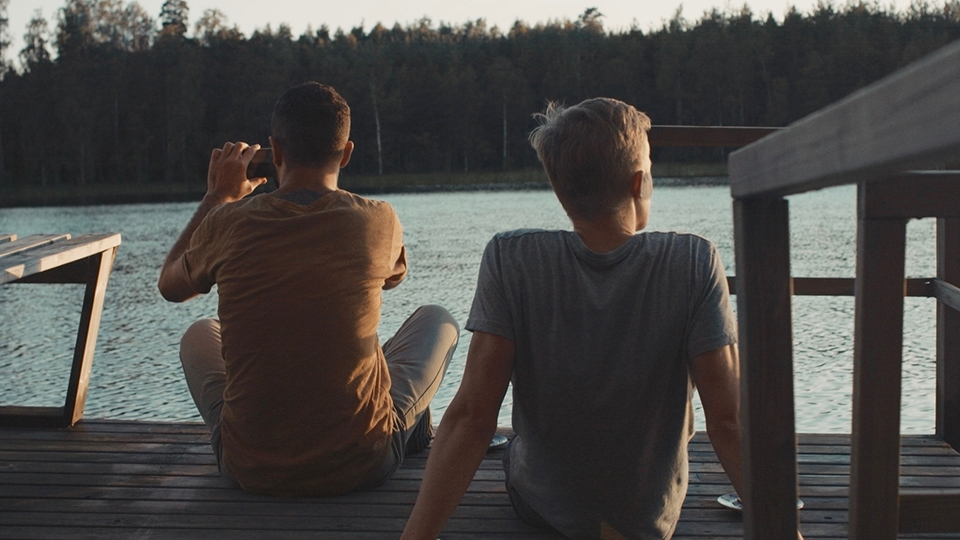 Leevi (Janne Puustinen) has an estranged relationship with his father Jouko (Mika Melender) after moving to Paris to attend university. He returns to Finland for the summer to help Jouko renovate the family’s lake house and meets Syrian asylum seeker Tareq (Boodi Kabbani), who has been hired to help them. Jouko is called back to town for work leaving Leevi and Tareq to continue work without him. Once they are alone, the men start to get to know each other and embark on an intense relationship.

A Moment in the Reeds has a very similar storyline to God’s Own Country but with a different, and more picturesque setting. I found there was a little more depth to A Moment in the Reeds though and it the entire film mostly hangs on the shoulders of Janne Puustinen and Boodi Kabbani. Leevi and Tareq quickly bond as Leevi, unlike his father, can speak English so he’s able to communicate with Tareq who doesn’t know very much Finnish. Jouko’s departure from the lake house allows the men to spend time chatting about their lives over some beers and that quickly turns sexual.

At the beginning of the film it’s hinted that Jouko has a suspicion that Leevi may be gay and the way he dances around the subject suggests he’s not all that happy about it. Leevi on the other hand refuses to be drawn on his father’s intrusive questions and is happy for his father not to have confirmation one way or the other. Meeting Tareq reminds Leevi how fortunate he is to live in places that doesn’t really care about his sexuality. For Tareq he’s had to live a closeted life in Syria, where homosexuality is very much frowned upon.

Outside of the intense and passionate relationship Leevi and Tareq share, A Moment in the Reeds is also an exploration of a broken bond between a father and a son. Leevi and Jouko have no idea how to relate to one another and a few of their issues start to unravel over the course of the film, leading to an emotional climax.

The chemistry between Puustinen and Kabbani is off the charts. When they lock eyes for the first time, I was slightly worried my TV was going to burst into flames. Writer/director Makela doesn’t shy away from the sexual part of their relationship, giving lengthy and explicit sex scenes chance to breathe. You feel very much along for the ride once they give in to their desires. Both actors impress with their clothes on too, conversing about the differences between their lives.

A Moment in the Reeds may have a familiar plot but it does something a little different with it. It touches upon a variety of social issues and the central relationship between Leevi and Tareq will keep you hooked. At times the film enjoys moments of quiet, which gives you the chance to take in the gorgeous location. A Moment in the Reeds is a hugely enjoyable film that packs an emotional punch among moments of eroticism.

Buy a A Moment in the Reeds on DVD