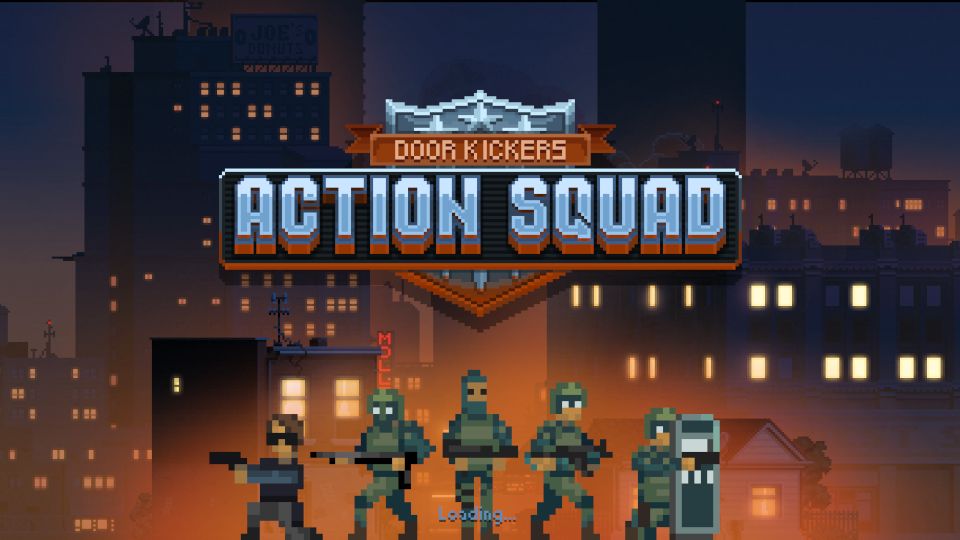 Door Kickers: Action Squad is a side-scrolling retro action shooter by KillHouse Games and PixelShard which was released on Sept 10th 2018

On the surface the premise is pretty simple. Either on your own or with a friend you need to clear each level of terrorists whilst rescuing as many hostages as possible (i.e. the ones you haven’t shot by mistake!). Once you dig a bit deeper though there is much more on offer than simply smashing down doors and shooting stuff.

You can check out the official trailer below

You can choose from five different operators, each having different weapons, abilities and difficulties. As you imagine each comes with it’s own pros & cons. As you progress through the game you gain skill points which can be spent on upgrading your operator giving the game more depth, however, each operator has the same set of skills so it’s not as deep as it could be. Before each level is started you get to choose which operator you want to use and can customize some of the gear they start with.

Each operator has a standard and special attack which adds a bit of variety to each playthrough. As you slaughter your way through each level you also gain ability points which can spent during the level. You can spend them on body armour, health, equipment packs or you could choose to save them up and use your ultimate ability which can really make the difference between success and failure.

The missions themselves are fun to play and you should be prepared to die quite a lot as you put them to memory. One nice feature is that you earn skill points even when you fail a mission so you are constantly working towards that next upgrade. Maps vary nicely and each offers its own unique challenges with some really tricky bits. I played the game solo so tactical options were limited, but I can see how a whole new way of playing the game would open up when playing co-op. Although I found the levels fun to play, success often came down to memorising each level and simply planning a route through.

As you can see from the screenshots the pixel art style gives the game a fair bit of retro charm. The soundtrack and sound effects remind me of 80s action movies and simply add to the fun.

I won’t lie, I didn’t like the game at first, I found it too simplistic (in part because I chose the easiest operator and was blasting through levels with abandon) and it took coming back to the game after a few days away to appreciate what is on offer here.  There is a fair amount of choice in terms of how you want to approach each level and if you play with a friend loads more tactical options will open up.

You can check out the official page here