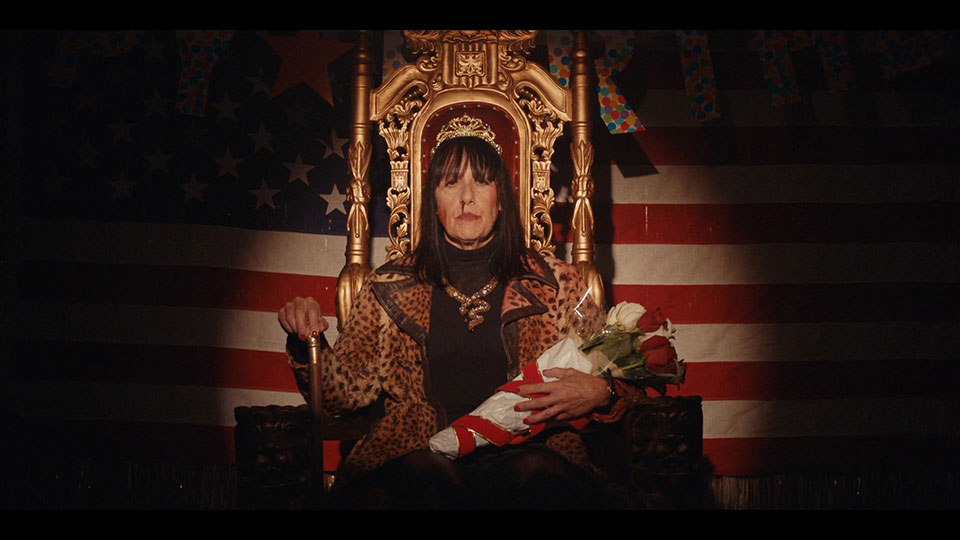 Queen Mary (Rosemary Hochschild) finds her past catching up with her on her 60th birthday. The owner of a Los Angeles strip club, Mary’s 25-year-old debt comes back to haunt her when the mob shows up on her doorstep. When her son Otto (Orson Oblowitz) is kidnapped, Mary embarks on a revenge mission that sees her getting further into trouble and leads to a violent downward spiral.

The Queen of Hollywood Blvd is the feature film debut from film-maker Orson Oblowitz. I first heard about the film from Orson himself when he talked about it prior to the screening of his latest film Hell is Where the Home is at Arrow Video FrightFest 2018 back in August. The film sounded like a trippy ride and when he revealed his mother, Rosemary Hochschild, was the star it was too wacky to resist. The film is getting a select theatrical release in the US before hitting VOD.

It’s very clear from even just the opening minutes of the film, where Oblowitz got his inspiration from. The Queen of Hollywood Blvd has the look and film of a Quentin Tarantino and Robert Rodriguez production, bringing to mind their epic Grindhouse project. Stylistically, Oblowitz is on to a winner here as he combines vivid imagery with a bonkers storyline that keeps you engaged and delivers plenty of pay off.

Queen Mary’s descent into the underbelly of Los Angeles is one that’s not unfamiliar to anyone who’s seen a gritty crime thriller set in the City of Angels. She’s impulsive and perhaps a little entitled so she doesn’t take too kindly to being asked to repay her debt. Her actions put those around her in danger, including her son, and I spent a lot of the film not being too sure whether I could trust her or not. To be honest, I wasn’t that sure by the end either.

Where the film falters slightly is in the casting of Rosemary Hochschild. I can’t imagine what it must be like to direct your mother in a film such as this but that’s not really the issue here. While Hochschild looks the part, I found her performance to be a little stilted in places. I understand that Queen Mary is a cold-hearted and ruthless character but there’s no layers going on with Hochschild’s performance. At times it felt like she was reading straight from her script and that’s a shame.

The Queen of Hollywood Blvd is an interesting film and as a debut feature film it’s impressive. Oblowitz perhaps suffer from what most new film-makers do – trying to pack in too many ideas. The film isn’t as strong as Hell is Where the Home is but it will likely appeal to B-movie fans. There are some great moments but overall I didn’t feel it hung together as well as it could have.