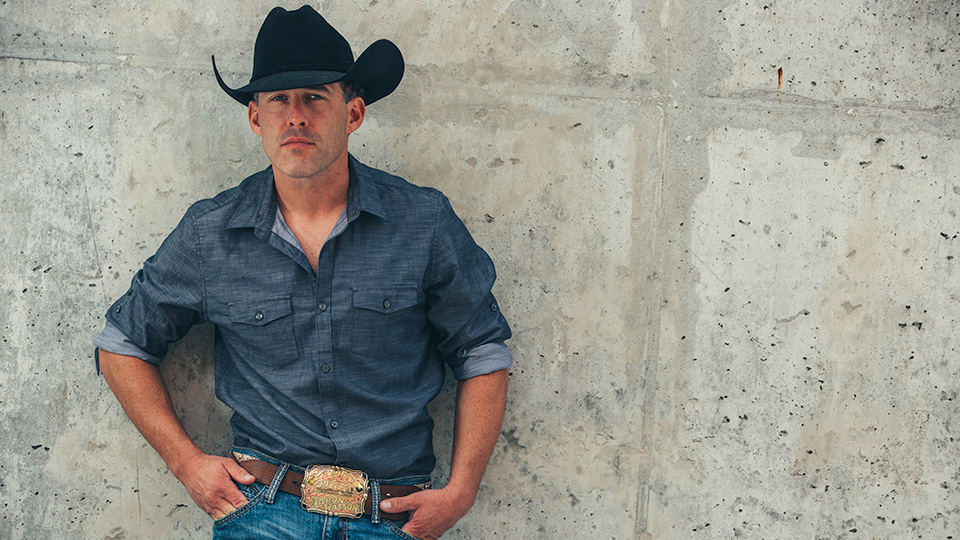 It may be a country cliché that it takes 10 years to become an overnight success, but that was certainly the case for Aaron Watson.

Having been a fixture of the Texas country scene for over a decade, it wasn’t until Watson’s 2015 album The Underdog debuted at number 1 on Billboard’s Country Albums chart – becoming the first independent male artist to do so – that he came to wider attention. Since then he’s scored his first US Top 10 hit with Outta Style, taken from his 2017 follow-up Vaquero, and released his first live album in 10 years.

I spoke to Aaron during his recent UK tour, where he stepped up to headline The Long Road Festival at the last minute. Read on to find out more about the new record, his thoughts on festival crowds and songwriting, as well as upcoming new music…

How has the tour been going so far?

It’s going great. I think this is our fourth time in the UK, I believe, and it’s just a real treat coming over here. We just absolutely love it. The fans have such a deep appreciation for the music, it’s just flattering.

Do you find UK fans react differently compared to the US or other places you’ve visited?

Y’know, I think the fans over here in the UK are a little more hungry for live music. I don’t think they get the amount of live music like we do back home. Y’know, there’s just so many bands back home. There are small towns that literally have good bands every week back home. And I really just sense the appreciation from the fans here in the UK. They’re non-stop thanking me for making time to come see them, and when you’re so far away from home it’s just nice to be treated with such hospitality. I think music can be such a universal language that it’s neat to share that experience together.

You played your first UK festival as part of this tour – do you find festival crowds tend to be different to other shows?

You’ve just released your new live album, Live At The World’s Biggest Rodeo Show. Can you tell us more about that?

Yeah, it’s actually our fourteenth album to release. We recorded it about 18 months ago at Houston Rodeo in front of, like, 70,000 people. And we were gonna put it out last year but that’s about the time that Hurricane Harvey came through and devastated the coast of Texas. So we really delayed putting the album out, and now we’ve released it. And we’re using some of the proceeds to raise money and raise awareness for a lot of the people who are still suffering from the destruction of Hurricane Harvey. So it’s nice to be able to use the music for a greater cause.

There’s also a new original song on the record, Higher Ground. What was the inspiration behind that?

Y’know, really what inspired that song was just when you would turn on the news and you would see all these people coming together and helping each other out during such a hard time. I mean, it was just moving. And with all the stuff we have on social media and news today, just such negativity, everybody always focuses on the differences instead of the stuff we have in common. And I really think that all those people along there down the coast of Texas set a great example for the rest of our country, because during that time a lot of people were arguing and fighting and rioting over political-type things. But when that hurricane hit and there’s people with their lives in danger, I just think that seeing people from different religions, different backgrounds, different colours come together and show each other kindness and love, I just think that was inspiring for all of us to see and really kind of reminded everyone that we’re not that much different. So I just wanted to write a song for all those people that said, ‘thanks’.

Do you have a typical approach to songwriting or does it vary?

Y’know, it just kind of varies. I just try to keep my eyes open and I try to listen, and I try to let life inspire me. There’s so many wonderful things around you, from where you travel to my kids and my wife at home. I try to wake up every morning and write, stay up late every night and write, but sometimes ideas hit me during the day. Songwriting is like a blessing and a curse. It controls your life, y’know? It’s a wonderful thing and you never know when that next idea’s gonna hit.

You released the video for Run Wild Horses recently. It stars you and your wife Kimberley – what was it like working together?

Oh, it was fun. Y’know, I wrote the song for her, so I was like, ‘you have to be in the video’. And I don’t really like making videos. But we recorded it one night and we literally worked from 9PM to 6AM. So it was a lot of fun having her there. We just acted silly. We were so tired we could hardly think, but it was a lot of fun.

This is your fourteenth record but your breakthrough was The Underdog. Was the success of that album a strange feeling?

Yeah, it’s very odd actually. It still doesn’t seem normal for me. Y’know, for the first 13, 14 years we were just doing our own thing, but I guess the popularity over the years has continued to build and build and build and I guess finally people started talking notice. But we’re not changing anything about us or our music. I write my songs, I write what I feel – I have to. The music comes from the heart, and our number one focus is the fans. They’re the reason why we’re able to do what we do. So fans come first.

What got you into music originally, and what led you to pursue it as a career?

Y’know, music was always a part of life. My dad was always playing all those great vinyl records – Willie and Waylon, the Beatles, the Beach Boys, the Rolling Stones, Sinatra, Ernest Tubb, Lefty Frizell. So there was always great music around the house. And my mom would always encourage me to sing when I was at church. So I think it’s just a combination of all that. It’s just something that’s always been around. And I started developing a love for songwriting, and it became a hobby and something I was very passionate about. Next thing you know, people started asking me to play at different functions and they paid me, and I was like, ‘whoah, this could be a job’. So I just have always tried to work hard and run a good business and give God all the glory. Like I say, the fans come first, and let them know I much appreciate them. It’s so different when we’re playing here in the UK. The reason why we come back to the UK – and we’ll always continue to come back to the UK – is just because there’s great music-lovers here in this part of the world, and they make us feel right at home in the UK.

Oh gosh! There’s so many. That’s a great question. Um… I’ve always loved a lot of those Jimmy Webb songs, y’know – The Highwayman, By The Time I Get To Phoenix, Wichita Lineman. Pretty much anything Jimmy Webb ever wrote, I wish I had written. And I know that’s kind of old-school but there’s a lot to learn from those old-school songwriters. A lot of these new songwriters today could learn a lot from going back and listening to these guys that really focused on the melody and the lyrical integrity, not just the drum loops and the beat, but the whole song. So basically any Jimmy Webb or Guy Clarke song, I wish I’d written.

What’s next for you – is there more touring, writing etc?

Oh yeah, lots of writing. I got up this morning and I was writing. Actually next week I’m going in the studio and making a new country album. It’ll come out some time in 2019. But we’re putting out a Christmas record this fall, which’ll be a lot of fun. My wife sings some songs with me, my daughter and my boys sing with me, so it was a lot of fun. It’s gonna be fun to share that album with the fans. We’re just gonna keep working hard and making music.