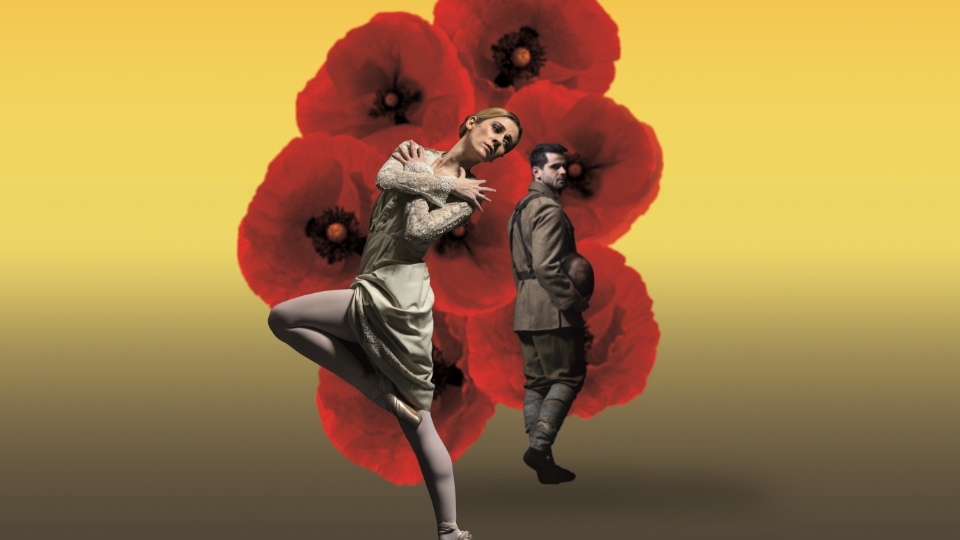 New English Ballet Theatre are performing a very special double bill Remembrance | The Four Seasons to audiences in commemoration of the centenary of The Armistice of 11 November 1918.

The company begin with The Four Seasons, the vision of dancer/choreographer/director Jenna Lee. First performed by NEBT in 2017 it’s a bold, stylish ballet. Magical choreography combined with Richter’s brilliant re-interpretation of Vivaldi’s The Four Seasons, together with April Dalton’s vibrant costumes representing each season, the colours really bring Spring, Summer, Autumn and Winter to life before our eyes.

It’s a hypnotic performance by the company with movements both gentle and rousing in equal measure. The light and shade of silhouettes were used to great effect, in fact they were under-used if anything, but the moving performances left us in a reflective mood heading into the interval to prepare for Remembrance.

Remembrance is Wayne Eagling’s first piece made specifically for NEBT. Inspired by the whirlwind romance between the great Marie Rambert (Alessia Lugoboni) and the dashing playwright Ashley Dukes (Alexander Nuttall) and the personal anguish created by their sudden separation as Dukes is called back to the horrors of the battlefield just four days after they met and fell in love.

It’s a beautiful piece, set to Handel’s Ode for St Cecilia’s Day. Played live at the Peacock Theatre, with performances by The English Concert orchestra on period instruments with soloists and chorus it was a stirring combination of talents on display.

The exquisite ebb and flow of Alexander Nuttall and Alessia Lugoboni’s syncronised movements take us through the excitement, passion and pain of their love story as she sorrowfully waves him off to war at Waterloo station, conjured up by the famous clock and roof projected across a backdrop that filled the entire stage.

Marie is consumed with heartbreak, confusion and fear, at first convinced every face she sees is her lover’s before she is haunted by nightmarish visions of the news of his death. Their love story, happily, has an uplifting ending, as the pair were indeed reunited after the Armistice. As red ribbons plummet across the stage as the curtain falls, we’re left recalling the oceans of blood that poured out across Europe’s battlefields. Remembrance is a moving, fitting and reflective piece of theatre to honour 100 years since the end of World War One. Long may the promotion of peace, love and beauty in this world continue.