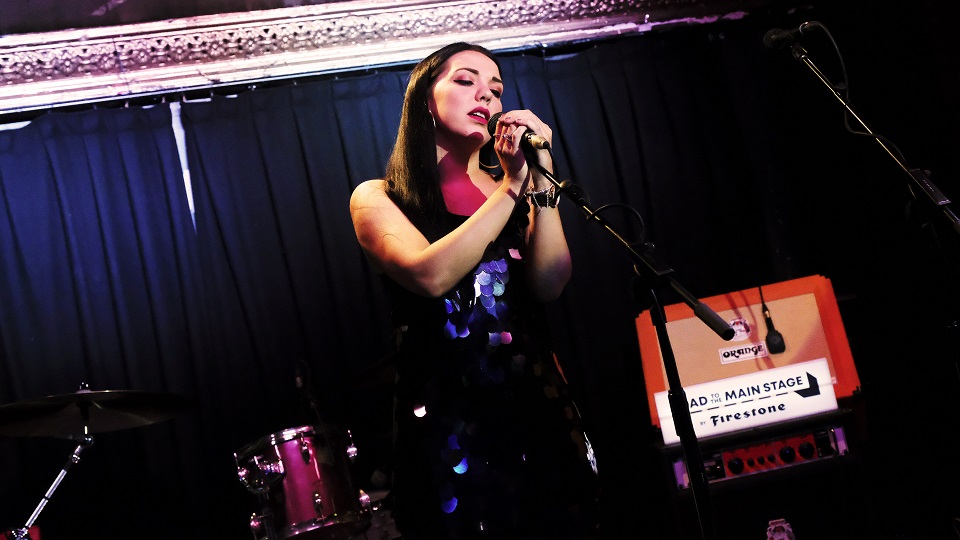 Originally from Yorkshire, Jade Helliwell first came to attention when a video of her singing Leonard Cohen’s Hallelujah with a Leeds busker went viral. 21 million views later, she’s now released an album (which reached number 1 on the UK iTunes Country charts and number 8 on the iTunes UK Albums charts) and two EPs, won the 2017 British Country Music Association Female Vocalist of the Year Award, and appeared at festivals including Nashville Meets London. Last night she performed at the intimate Victoria Dalston at the launch of Firestone’s Road To The Main Stage competition, which she is an ambassador for.

After a short chat with the evening’s host, BBC Radio 1 presenter Abbie McCarthy, Helliwell took to the stage for her acoustic set. She kicked off her set with Boom Tick from her EP Infatuation, which was released earlier this year. It’s a soulful, poppy number with a catchy chorus, which allowed her vocals to soar.

Although the performance was short, Helliwell used it to full effect, showcasing songs from both her EPs and mixing slower songs with more uptempo tracks. The moving Ask Me To Stay saw her give an expressive and emotional performance, whilst Never Learn contrasted its uptempo rhythm with bittersweet lyrics. She also chatted to the audience throughout about the songs and the stories behind them, and came across as very warm and engaging.

However, the consistent thread was Helliwell’s fantastic voice. She showed off great depth throughout, with a little bit of gravel and without being afraid to belt out the big notes, and her tone reminded me a little of a young Dolly Parton. I also felt the acoustic performance made the emphasis on her vocal much stronger and showed off how talented a singer she is.

After thanking Firestone, Helliwell closed her set with By My Side, which also appears on her Infatuation EP. The acoustic version gave it a folky, atmospheric feel with some lovely harmonies, whilst Helliwell’s vocals were yearning and plaintive. It all added up to an incredibly powerful moment and was met with loud cheers and applause from the crowd at the end.

Overall Jade Helliwell’s performance was a great taster of her music. Her incredible vocal range was at the forefront and there was a good variety of ballads and more upbeat tunes in her set. There’s no doubt that she made plenty of new fans last night and confirmed why many UK country fans are tipping her as the next big thing. It was an excellent introduction to her sound and I’m looking forward to hearing more from her in the future.

Firestone’s Road To The Main Stage competition is open to unsigned bands and musicians of all genres. Entries are open now until 4th October. For more information and to take part visit https://firestone.roadtothemainstage.co.uk/.