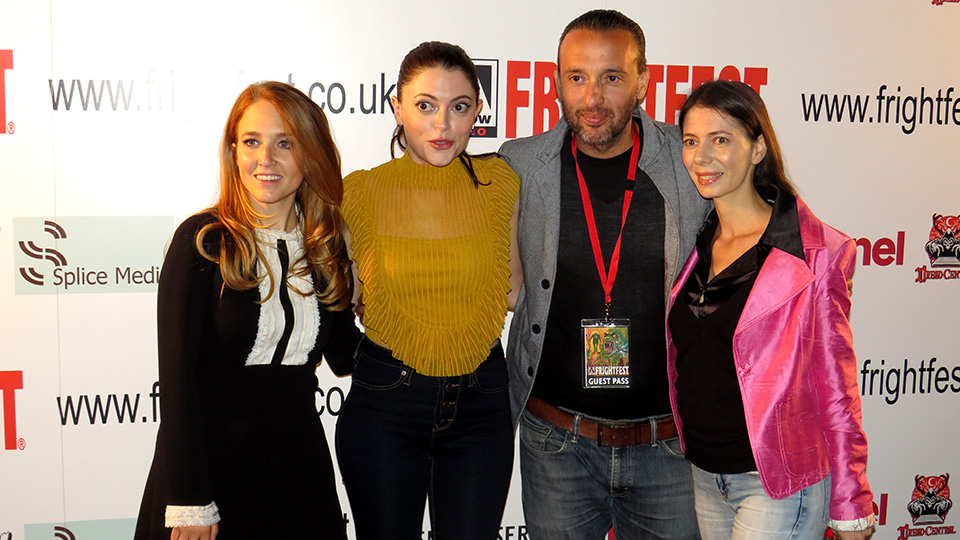 St. Agatha tells the story of Mary (Sabrina Kern), a pregnant young girl who seeks solace in a convent not realising that Mother Superior (Carolyn Hennesy) and her fellow nuns have a sinister operation going on.

Sara Sometti Michaels, one of the film’s writers, was in attendance with lead star Sabrina Kern, actress Hannah Fierman and actor/producer Seth Michaels. You can read our review of St. Agatha to find out what we thought.

I caught up with them prior to the screening at Arrow Video FrightFest 2018 to talk about the concept for the film, find out their experiences on set and discuss their favourite scary films.

Nunsploitation has been done a lot over the years and I thought St. Agatha put a refreshing twist on it. Where did the concept for this film come from?

Sara: I didn’t even know about nunsploitation to be honest even though I’ve been a huge horror fan. I never knew it was a thing. When I was in kindergarten my mom loved this soap opera from South America. There was an evil nun that would go around the convent and try to kill the girls. She had secret passages and she was terrifying to me because I was going to kindergarten with the nuns and I thought, ‘what if one one them is just as crazy as her?’ I had a really traumatic childhood. I was super scared all the time. Then growing up I kept thinking about some of the scenes with the nun in the soap opera and I started thinking maybe I can do something fun like that and turn it into a horror film. That’s how St. Agatha was born.

Why is it that nuns are so terrifying?

Seth: Obviously you never went to a Catholic school… (laughs).

Sara: Well they were always very strict in kindergarten. There were so many rules. I was a good kid but I was so scared to disappoint them because they were really strict. When you’re a kid, and you see this soap opera, your imagination starts going crazy and for me that’s what it was. There is a mystery behind them. What do they do during their free time? You don’t see them doing things that we all do… like normal. What do they do?

Sabrina your performance is a tour-de-force. You really go through the mill in this film. How did you prepare for the role and how did you physically get through it?

Sabrina: How did I prepare? I read the script many, many times. I had a big white board to keep track because obviously you don’t film from A to Z. I wanted to make sure, because I go through so much, to know where I am when I’m filming day one and I film a scene that’s in the middle of the movie so I know what’s happened before. Every morning I would look at this white board and make sure I know where I’m at.

I didn’t have the same life as Agatha at all, I’ve had a pretty good life I have to say (laughs). I kind of could weirdly relate to her. I liked how determined she is, even though so much has happened to her, she’s just so determined to keep fighting and she has that fire in her. I just fully took her on when I was on set. Some days were obviously a little more challenging than others because some days everything happened in one day. We had the basement where a lot happens and that all happened on one day. That was a challenging day and I was just worried to make sure I didn’t lose my voice or anything like that. It was so much fun that I think the adrenaline of the fun kept me going.

How were those coffin scenes to film? They terrified me and I wasn’t even in the coffin…

Sabrina: (laughs) You know what, I thought it would be weird to lie in the coffin but it’s not that weird anymore if you have 30 people standing around you. They were all so nice on set. I got a blanket on my body that you don’t see whenever you just see my face (laughs). It was comfortable, it wasn’t bad.

Seth: She actually kept the coffin…

Sabrina: Exactly! I didn’t want to say it but it’s my choice of…

Hannah, let’s talk about your character Sarah. You have one of the most horrific scenes in the film, without giving too much away. How was your experience on the film?

Hannah: Oh I had a wonderful time. I really did. I liked it that Darren let us have free range with our character and let us develop on our own. We would just come to him with ideas and he would change the script, or his writers would with our ideas frequently. I think that’s why all of the main characters were so well-rounded because so much thought was put into them, as much as possible from every person there. That’s rare because frequently, and understandably, a lot of directors are control freaks because if it’s fucked then it’s their fault but that wasn’t the way it was on this movie, which made it a great experience artistically.

Sarah: Yeah, but then it turns out that maybe she isn’t…

Carolyn Hennesy plays Mother Superior. Is she as scary in real life?

Seth: Carolyn is great. She’s super professional. She would come on set and do her job. She had a colouring book and between scenes she would go back to it. .

Hannah: And she just had so much to remember. It was just so impressive. I would have been much more nervous and she just cruised right on through it. It was magical.

I’m now terrified of her and will never be able to watch Cougar Town or True Blood ever again. She gets that balance right between being so overly nice and pleasant, and so shockingly menacing…

Sabrina: Yeah, you believe her both times!

What would you say what was the biggest challenge of making this film?

(laughter from the room).

Sara: Time. We shot in 20 days, which seems a lot but we had so many complicated scenes or scenes that required a lot of preparation or reset and clean up. I wish we’d had five extra days and it was cold.

Seth: I’ve been an actor for 20 years and this is my first feature producing it. From a producer’s point of view it’s a lot of work. You’re dealing with so many moving parts from from cast to director and writers and crew and so on. It takes a lot. My hat’s off to all the producers that I’ve worked with as an actor. It’s a lot of work. From the beginning to this day we’re still dealing with a lot of things. We’re doing the film festivals and when you see the audience come to you and say, ‘oh my God we love it’… that’s the payoff to bring something to life and have people really like it and thank you for making it.

Hannah: You guys really seemed so calm though…

Sabrina: Yeah, you really did!

Seth: You kind of have to. You have to keep it calm. You’re sort of the captain boat in a way from the director to the producers. If the captain starts freaking out, then holy shit we’re going down but inside you’re dying.

Sara: We were never really sleeping Seth and I because we had an hour to drive each way. Sometimes it would turn into an hour and a half because sometimes we had to take some people home. It was a long ride.

Hannah: I got into the wrong van once and everyone was like ‘get out!’

(laughs from the room).

Seth: At the end of the day you’re making a movie not picking rocks in a mine somewhere fearing that it might just crumble on you…

Sabrina: …well actually that house was crumbling… a little bit!

Seth: We shot in a town called Madison and I think it was maybe the only town that wasn’t burnt down in the Civil War. Every single house is that town is just amazing and it’s so beautiful. This one house that we shot in, nobody had lived there for the past six or seven years. We had a few issues, which worked perfect for us.

Sara: All the cracks you see in the movie were real. All the cracking sounds that you hear during the footsteps are real. The ceiling is real. We got lucky with that house. We found it while we were shooting a comedy film believe it or not (laughs).

Seth: I was playing a priest in that movie. An Italian production company came into town and needed someone who spoke Italian so I was hired. As it was Italian I brought (Sara), they loved her and asked her to work for them for the next three weeks. I did two days on but she stayed for the whole production. One of the days she sent me a text saying, ‘fuck! We found the house for St. Agatha’. It looked really scary so we went and scouted. We flew Darren out from Los Angeles, he saw the house and he loved it.

Sara: That house is a character on its own in the movie. It was so present. Funnily enough one of the girls that worked on the camera for us, she grew up in that house. She was telling us stories because the Mother Superior’s room was actually her room so she would tell me how terrified she was growing up in that room because the house was crumbling and she would hear these crazy noises. That attic was in there so she would tell me all stories of how terrified she was and how she couldn’t wait to move.

Sara: My all-time is The Shining but lately The Autopsy of Jane Doe.

Sabrina: I love the Saw movies and I really, really loved The Babadook.

Hannah: I’m still freaked out by this movie that I don’t want to say the title of. The one with the really freaky nun and I auditioned for it and didn’t get the role…

Hannah: Yes! I’m glad I didn’t have to say it. That was a scary movie.

Seth: Another scary film… Salem’s Lot. I could not ever sleep in a room with no curtains.

St. Agatha will be released on DVD by Signature Entertainment in January 2019.