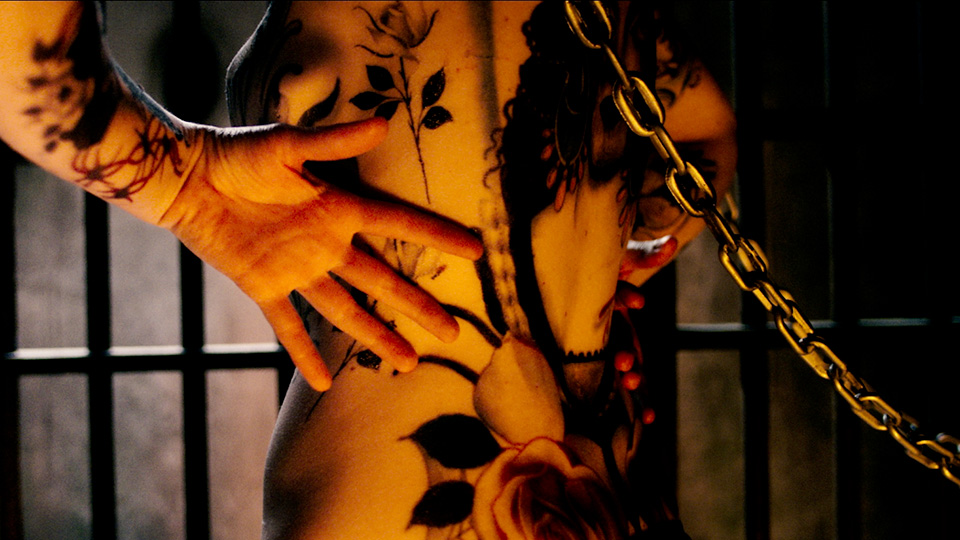 After being kicked out of the apartment she’s been living in, Katia (Natalia Kostrzewa) appeals to her Australian friend Lucy (Jo Woodcock) to let her move in for a short period of time. Lucy agrees, in part because she’s going to visit her sick mother, and before she goes she introduces Katia to Bob Reid (Richard Brake), an American tattoo artist, during a night out. Intrigued by Bob, Katia decides to spend the money Lucy gave her to pay the rent so she can get a tattoo. Katia soon learns that Bob isn’t the man she thought he was when he kidnaps her, locks her in a cell and treats her body as his canvas.

Perfect Skin is the feature film debut of writer/director Kevin Chicken and it doesn’t go where you think it’s going to. The set-up prepares you for a torture porn extravaganza in the same ilk as Hostel but that’s not what Perfect Skin delivers at all. It’s actually much more of a character study of Bob, who doesn’t see anything wrong with kidnapping a young woman and treating her body as if he has ownership over it. Thankfully the film doesn’t go down the route of sexual violence, which is so easily could have done, instead opting to explore the shifting dynamic between Bob and Katia as he tattoos every inch of her and starts to modify her body into his vision.

While Perfect Skin certainly isn’t a gore fest, it will likely leave you wincing and look away from the screen. Seeing flesh being pierced, and occasionally hung via metal chains from the ceiling, isn’t the easiest thing to look at. By the film’s final act, it’s also not all that easy to look at Katia following the work Bob has carried out on her body, without her permission. There’s something very uncomfortable about the scenes where Bob is furiously tattooing his victim and it made me feel very uneasy.

Where the film succeeds is in the acting of its two leads. Richard Brake is expertly chilling as Bob starting the film as a seemingly affable chap but soon revealing himself to be an emotionally messed-up psychopath. I had shivers every time he appeared on screen and filled with dread in anticipation of what he was going to do next. He’s matched by Natalia Kostrzewa who plays Katia in a way you may not expect. It would have been easy for her to deliver every scene hysterically but she doesn’t do that. While there are, understandably, moments of high emotion, Kostrzewa’s performance is more nuanced. As Katia she tries to get under the skin of Bob in a subtle way by taking an interest in what he’s doing to her.

For the most part Perfect Skin is a taut horror that will have you on the edge of your seat, and quite possibly begging for mercy. There’s an act by Bob in the final 30 minutes that I felt was unnecessary and tipped him over from oddball to murderer. I wasn’t wholly convinced by that twist as I had already made my mind up about the character without him carrying out something so despicable.

Perfect Skin is a truly chilling watch and a promising debut from Chicken, who uses the most of his locations and budget. The film is a lot better than the premise would have you believe and it’s a surprisingly polished effort from a first-time feature director. It will definitely test how squeamish you are and the gritty realism of it, makes it all the more frightening. Perfect Skin is an engaging and horrifying film that will draw you in and refuse to let you go.