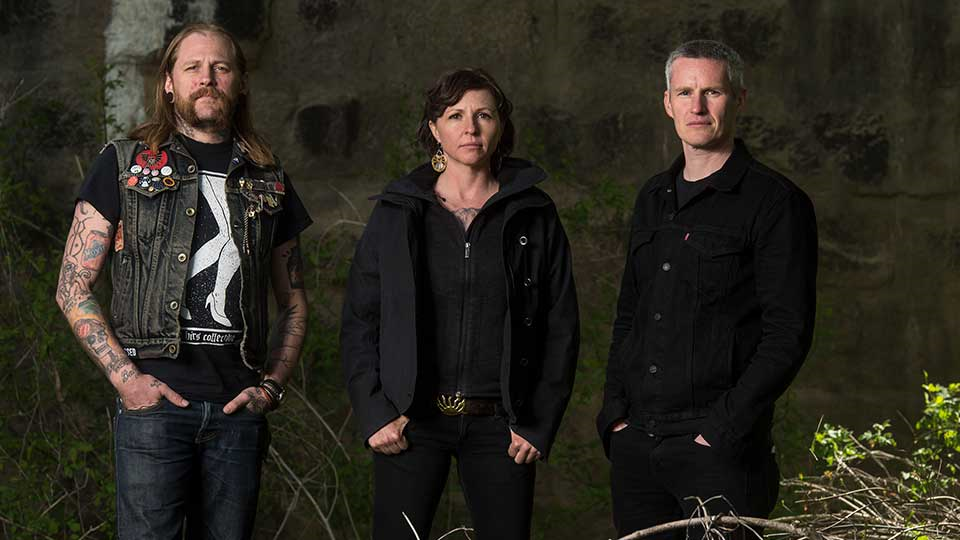 They released their latest album Chains Are Broken last week – their first recording of new material since 2013 – and are about to embark on a five-date UK tour.

Ahead of the band’s trip across the pond, I spoke to guitarist and lead songwriter Pete Bernhard about the new record, playing at Colorado’s legendary Red Rocks Amphitheatre and why UK fans are the best in Europe.

What can people coming to see you on tour next month expect?

Well, I guess if they’ve never seen us before they can expect guitar, banjo and upright bass. And we have a new album out which none of them have ever heard, so they can expect that. And you can expect to hear a mixture of all sorts of different sounds.

Do you find you get a different response from UK fans compared to other places?

Do fans in the UK react to different songs?

I’d say that they’re more respectful than our American fans, for sure. European audiences are just very nice. We enjoy playing for them. Their reaction to our music isn’t quite as crazy as American audiences, but that can be nice. It’s a nice change sometimes.

Can you tell us a bit more about your new album Chains Are Broken?

Yeah, we recorded the new album down by El Paso, Texas. We actually had an English producer named Ted Hutt who’s worked with the Dropkick Murphys and Old Crow Medicine Show, Gaslight Anthem and bands like that. We recorded it right down by the Mexican border. We spent about three weeks out in the desert, just the three of us – bass, guitar, baritone guitar and drums – and all of us singing. It was a really fun album to make. It was a residential studio so we all worked there for a little over three weeks and it was the first time we’d had the chance to do that – usually we just go straight to the studio and then pop back out again a week later. This time we had a lot more space and time to really work on an album.

How was it working with Ted?

Yeah, he was really great. We liked the records he’d made and he kind of acts like a coach. He really just kind of kept us inspired, and he had a way he wanted to record the record which was really a lot of fun for us. We all played together live in one room, but then we would take the track of the bass and the drums and then we’d build off of that. On previous albums we’ve done we didn’t overdub very much. We just recorded it live in the room. So this was sort of a different approach and it worked really well. It allowed us a lot more freedom, I think.

Is that different approach something you’re keen to do in terms of keeping your music fresh?

Yeah. I mean, you’d always hope so, right? We like to always try with each album to do something different. We’ve been a band for a long time, and sometimes people hear the music and they’re like, ‘oh, it’s different from the music you played before’. And it’s like, of course it is! [laughs] We’re talking 10 years ago, y’know? It’s almost like looking at someone and saying, “why aren’t you the person you were 10 years ago?”

Yeah, there’s some of the songs I think just come. Like a song like Pray For Rain – that came together very easily and very simply, and I think it’s because it’s a little bit more in our wheelhouse. It’s what we’re used to. And then there were other songs, like I Can’t Stop was a little bit more difficult. Native Son was a little bit more difficult, just because we’re doing things we haven’t done before. And also All Is Quiet, a song on the new record, was definitely a big stretch for us. It’s a very slow song, a very cinematic song. So the ones were a little bit more in our wheelhouse, something like Piece Of My Heart or Deep Down, that song was really typical and just put together really quickly. And songs where we’re trying to do something new, something different that we haven’t done before, are a little bit challenging. There were a lot of moments making this record that were very challenging, but that’s a good thing.

This is your first album of new material since 2013. Was it quite easy to go back to that or did it take a little time to get into?

Well we’ve been working on the songs for a long time. Some of the songs I wrote just before we went in the studio, but most of them we’ve had at least the ideas of the songs for a long time. We’re a band that takes a long time to make a record. A lot of these songs we’ve been playing live and trying to work out the right versions for some of them for years. And then others kind of came together in the studio. But we really like to try and test our material out on our live crowd. That takes time and some bands can churn out a record every year, and we’ve never really been one of those bands. I write slowly and you just kind of have to wait around, y’know? I know it makes our record label angry but it’s just the way it is [laughs].

You mentioned testing out new material in your live shows – is there anything from the new record that’s getting a particularly good reaction live?

Yeah, definitely. Most of the songs that we’re playing – I’m in New York right now just doing promotion because the album comes out today, and most of the songs we’re playing on the radio are the songs that are kind of what we use to judge. The songs that we feel are getting a great reaction from the audience are the ones that we take out and play on the radio or wherever else. Deep Down definitely gets a great reaction, so does Paint My Face. Definitely Pray For Rain gets a really good reaction and the title track, Chains Are Broken, is a really good one as well. There’s a little bit of a slower sound to it but people seem to react to it really well.

The only thing typical about it is that it takes time. Songs come in all different ways – sometimes I can sit down and write a song in one day. From start to finish, it’s there. But most of the time I come up with an idea and then slowly, over the course of months, I change it and change it and change it. It’s really a process of playing things over and over again. I think it drives anybody who lives with a musician insane, because they just play the same song over and over and over again. At least that’s my process. So I think every once in a while you get it where a song just appears on your doorstep which is always wonderful, but most of the time for me at least it’s a long process of hammering a piece of ugly metal into a beautiful sword.

You released the video for Bad Idea a few weeks ago. Why did you decide to film it at Red Rocks?

We were just trying to capture what an amazing experience it is to play there. It’s probably our biggest show in the United States ever and it’s just a beautiful place to play. Colorado has just become one of the most vibrant music scenes in the United States. There’s so many music fans there and there’s so many concerts there, it’s amazing. So yeah, I think the idea behind it was just to capture what an experience it is to play there. We always wanted to play there, so many great people have played there. And the crowd is just great, so enthusiastic. I don’t know if it has to do with the legalisation of marijuana there or what but it’s just really fun and awesome to play for.

What got you into music, and what made you decide to pursue it as a career?

Well for me personally – and I think I can speak for our guitar and banjo player Cooper as well – it was my family. My father was a musician, my brother was a guitar player, my mother played guitar a little bit, my aunt played semi-professionally, my uncle was in a band. So for me it was kind of like the family business. Everybody who I looked up to was either a visual artist or a musician. In my dad’s family there’s a lot of painters, graphic designers, things like that, and then on my mom’s side of the family there’s more musicians.

I think it was mainly that everybody I looked up to played music and they started me very young. When I showed interest in music they got me a guitar and they bought me early blues stuff and early rock and roll. I was probably 10 years old. So yeah, it was really my family – my brother, my father, my uncle. They kind of inspired me to go out and do it. And my aunt especially as well, because she was a semi-professional musician and I thought what she did was so cool. That’s it in a nutshell.

Oh, wow! I mean… a lot of the people I like are not super-well known, but I really like the song Mr Mudd And Mr Gold which was written by Townes Van Zandt. That’s a very, very cool song. It’s just sort of like a piece of poetry. Maybe a little bit lesser-known song but I love it.

What do the next few months look like for the band? Is it mostly touring and promoting the new record?

For the next few months definitely, that’s what we’re gonna do. We go to Europe, then we come back and we have two tours in the United States and Canada. But then after that hopefully what we’re trying to do is go back in the studio and record a couple of songs where Lucia and Cooper are singing. Neither Cooper or Lucia sung lead on this album, so we’re going to record two more tracks, one with Cooper singing and one with Lucia singing. That’s kind of our next studio project. And yeah, after that… we did record our concert at Red Rocks and we’re hoping we can get that mixed and release that as well. That’s in the distant future but that’s a goal for sure.

See The Devil Makes Three on tour in the UK this September: