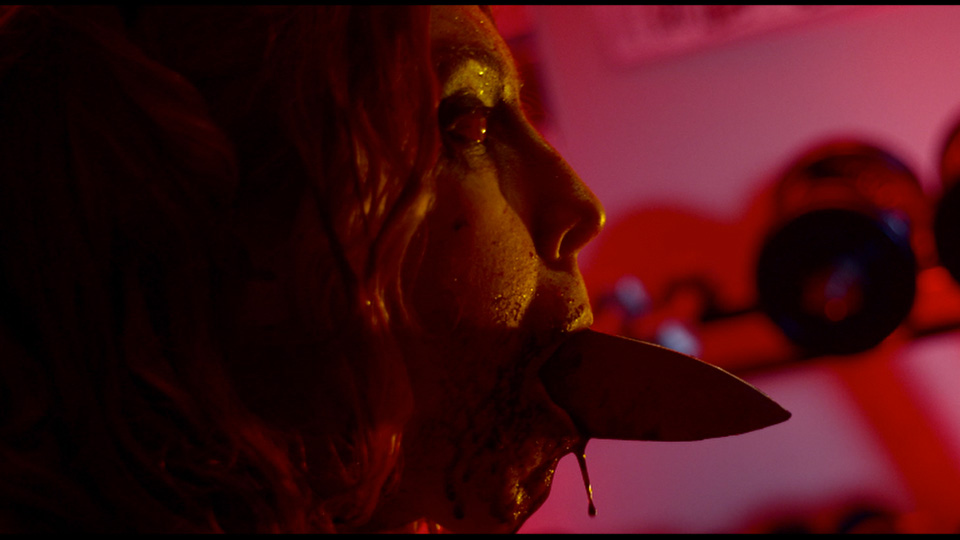 Seemingly sweet and innocent Amber (Elyse Dufour) is hired by would-be paranormal investigator Ted Hooper (Joe Walz) to look after his son Kevin (Jack Champion) and Ronnie (Bailey Campbell), the son of his girlfriend Charlotte (Deanna Meske). After Ted and Charlotte leave for their evening out, it’s revealed that Amber is actually a small-time thief and she calls in some friends to help her clean out the house. As Amber and her pals start stealing, Kevin and Ronnie find the key to a locked room in the house, where they find a book about a trio of witches called The Three Mothers. Accidentally calling the witches, when Kevin cuts his finger and bleeds in to the book, the boys unleash a night of blood-drenched chaos.

Set at Christmas, I was expecting a film along the lines of last year’s FrightFest gem Better Watch Out. The Night Sitter starts out strong and there are plenty of nods to both classic and contemporary horror. Directors Abiel Bruhn and John Rocco have clearly been influenced by John Carpenter’s Halloween and they use that inspiration to set the scene in a creepy and intriguing way. The film doesn’t reveal its hand immediately, instead setting up a series of plots that come together in time for the blood-bath of a finale.

Visually The Night Sitter is fantastic. The use of lighting creates a brilliant atmosphere with the different hues really bringing the film to life. In some ways it all feels very dream-like, which is fitting considering that early on Kevin confesses to Amber that he’s been dreaming about witches coming after him. Bruhn and Rocco inject plenty of style into the film and it complements their sharp script, which veers between horror and comedy.

Not everything here works though. The third act feels more rushed than it should and I didn’t feel that we got to spend enough time with The Three Mothers. The expectation of their arrival is met with a little disappointment when you realise how little time you’ll be spending with them. There also isn’t quite enough development in the story to establish them as anything other than an inevitable plot device, which is a real shame. The Three Mothers are creepy as hell but they don’t get enough chance to shine.

Elyse Dufour is the strongest of the cast members here. She’s plucky and opportunistic as Amber, and despite her being quite despicable you do actually care what happens to her. Of all the characters she gets the most development but you don’t really get to know all that much about her. In the film’s final half hour, she gets to show a more vulnerable side and she excels at spitting out the sharp dialogue.

There’s lots to enjoy about The Night Sitter but it isn’t as good a film as I hoped it would be. A little more focus on the story would have been welcome and the cast could have been thinned a little. There’s a really good premise here but the execution doesn’t quite do it justice. That’s all the more disappointing when the film looks so damn good. Bruhn and Rocco show promise and in Dufour they’ve found a scream queen in the making, but The Night Sitter, which entertaining, is ultimately a little disappointing.