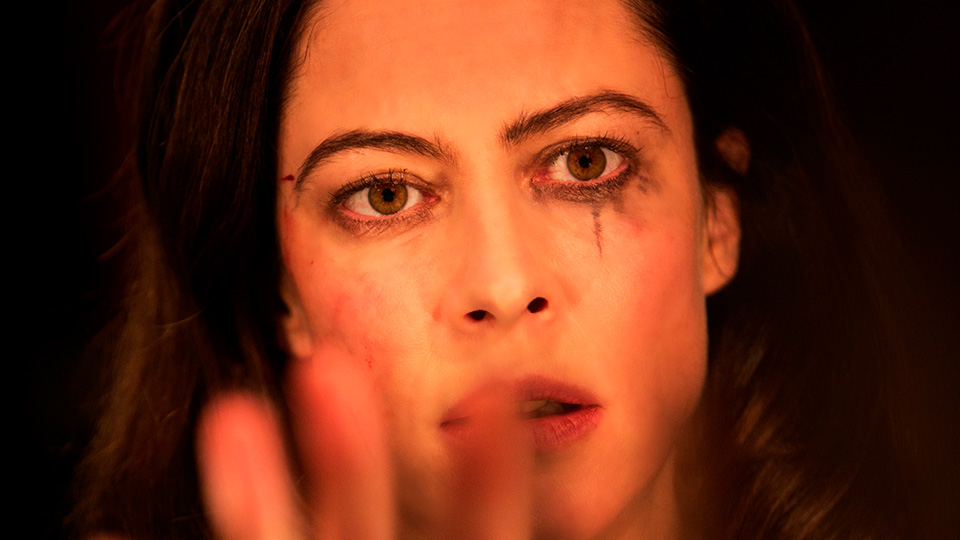 The Grand Guignol Theatre in Paris is drawing big crowds thanks to its leading lady Paula Maxa (Anna Mouglalis), who dies on stage every night in horrible and gory ways. As friction arises between Paula and the theatre owner André (Michael Fau), a series of murders starts to overshadow what’s taking place on stage. With protests raging outside every night, André decides he needs to up the ante to keep seats selling while Paula is secretly dealing with death threats being delivered directly to the theatre.

The Most Assassinated Woman in the World is an interesting and very different kind of movie. Based on true events, the film is part period drama, part horror making for a very unique experience. The audience is thrown directly into the film as one of Paula’s death scenes unravels on the screen. As she’s put through hell on stage, the theatre’s audience is lapping up every gory moment while reaching for the sick bucket. It actually takes a while to get into the meat of the story but that didn’t really bother me. The film is so beautifully shot that I was happy taking in the cinematography while the scene was being set.

The threats to Paula’s life are revealed when journalist Jean (Niels Schneider) goes backstage to interview the star. While she makes no fuss and doesn’t want anyone to know, Jean takes the opportunity to look through her dressing room when he’s left there alone. It sets him off on a mission to uncover the person making threats, which he believes ties in to the article he’s writing about the recent spate of murders. His pursuit of Paula, who proves to be fairly elusive, is one of the driving plots of the film and one of the most intriguing.

Anna Mouglalis is absolutely magnificent as Paula. She goes through pretty much every emotion over the course of the film and she really commands the camera. There’s a tease throughout that alludes to an event in her past and that adds another layer of mystery to Paula. She is the character audiences will care about and she’s the hook that carries you right through to the surprising end. Jean-Michel Balthazar is very good too as Paula’s confident and the theatre’s special effects maestro Paul. I really loved the relationship that the two characters had, even though a lot of the time their bond was unspoken.

A slight criticism that can be levelled at the film is that the tone is a little uneven. That’s in part due to the variety of influences and genres mixed into the fabric of the film. The switch from horror to drama to thriller may be off-putting for some but I found it quite fresh and original. Director Franck Ribière pulls all of the elements together well but a little more finesse could have evened it out ever so slightly.

The Most Assassinated Woman in the World won’t be to everyone’s taste. It pays homage to classic French cinema and has a definite art house feel to it, which makes it all the more surprising that Netflix have picked it up. Personally, I enjoyed it and I was taken in by the mystery and Mouglalis’ riveting central performance. The film may be a little left-of-centre but it’s hugely compelling and very enjoyable.

The Most Assassinated Woman In The World from FrightFest on Vimeo.