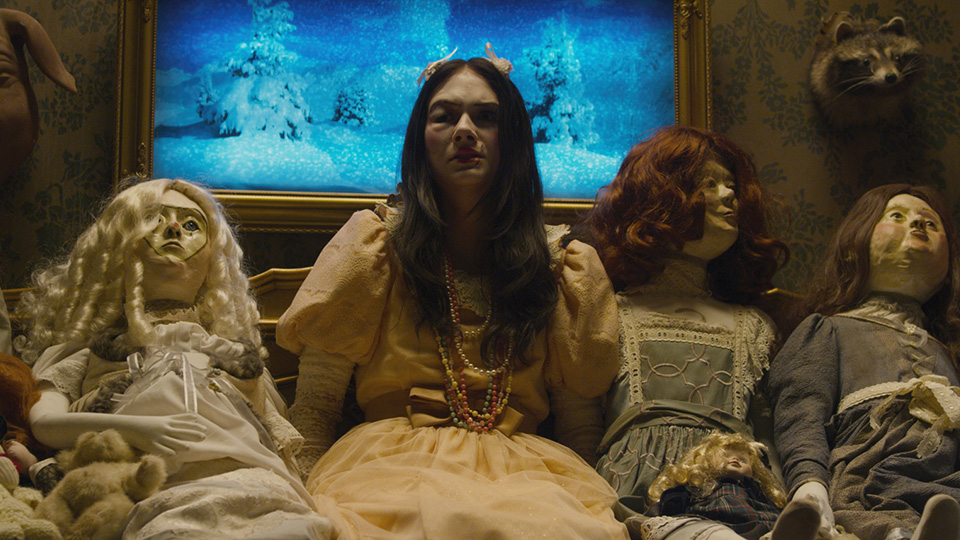 Beth (Emilia Jones) and Vera (Taylor Hickson) are uprooted by their mother Pauline (Mylène Farmer) and taken to live in a rundown old house that the family has inherited. In desperate need of work, the house is full of creepy dolls and odd collectibles. During the first night in the house, the family is attacked by two mysterious strangers leaving them with severe trauma. Sixteen years later Beth (Crystal Reed) is drawn back to her former home when she receives a distress call from her sister and is forced to face up to the memories that haunt her.

Incident in a Ghostland is the latest film from acclaimed film-maker Pascal Laugier and it’s by far one of the most brutal selections at this year’s Arrow Video FrightFest. Featuring one of the most harrowing openings I’ve seen in a horror for a long time, the film is relentless and will leave you both exhausted and disturbed. Once the set-up is out of the way, the film gives you a bit of a breather but believe me when I say it doesn’t last long. I wasn’t sure my nerves were going to last the full 91 minutes but they did… just about.

You have to have a strong stomach to make it through to the end of Incident in a Ghostland, not because it’s gory but because the violence against children is difficult to watch. Laugier uses the film’s first 20 minutes to push you right outside your comfort zone and to test you, and he succeeds in doing both. Also if you’re not a fan of dolls, then I’d say avoid this at all costs because they are everywhere.

Where Incident in a Ghostland falls short is that the film’s antagonists are two-dimensional. They aren’t given any real character development and by the time the credits roll you have no idea what their motivation was. Now I’m all for not over-explaining everything, as some horrors tend to do, but at least some hint or suggestion would have been welcome. It’s hard to put into context their vicious attack without having any idea why they’re doing it.

Jones and Hickson go through the mill over the course of the film and they are very believable in their roles. Both actresses were required to do some seriously horrific stuff at fairly young ages. It’s unnerving to know that Hickson was seriously injured during one of the film’s scenes, leaving her with a considerable scar on her face. Crystal Reed does a decent job as the older Beth while Anastasia Phillips gives a flat out bonkers performance as older Vera.