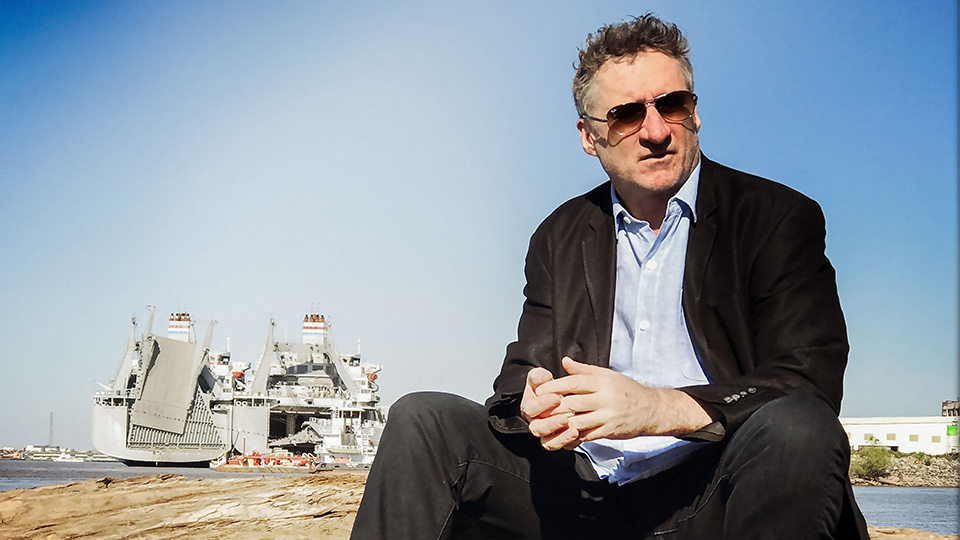 Although he’s originally from Kent, it’s safe to say that Jon Cleary’s music owes a huge debt to New Orleans.

Growing up in a musical family, Jon discovered funk and R’n’B music as a teenager, and left for New Orleans shortly after finishing school. He’s now been in the city for over 30 years, playing guitar and piano in bands alongside artists including Taj Mahal, Dr John and the legendary Bonnie Raitt. Additionally, he’s produced nine solo albums, including Dyna-Mite which was released this June.

I caught up with Jon recently to talk about the new record, working with Raitt and the influence New Orleans has had on his music.

Hi Jon! How are you?

I’m good thank you. Bit jetlagged, my body clock’s a bit confused. I could quite easily lie down and fall into a deep sleep. I’m guzzling coffee so I can stay awake for the interview [laughs].

You recently toured the UK with Bonnie Raitt and were in her band for over 10 years – what was it like to work with her?

Well it was an eye-opener for me. I’d spent years and years living in New Orleans, playing local dates, local gigs with all the local musicians, the old R’n’B musicians I learnt from, and New Orleans is very provincial and very far away from the music business. I got a call from Bonnie one day asking me to join her band, and it was quite interesting to be plucked out of little New Orleans and all of a sudden be flying around the world and riding in a tour bus and performing in big venues. That level of production was something I wasn’t used to. Bonnie’s quite a big star in the States. So it was a good education for me and got me out of New Orleans.

Before [Bonnie] I played in Taj Mahal’s band for a couple of years, and that was the first time I really left and started doing sessions in Los Angeles and touring internationally. I’d done a few European tours with New Orleans R’n’B guys and things, but this was a different league, really. Taj was a big stepping stone and Bonnie was a major act. So quite an education.

You recently released your new album Dyna-Mite. Can you tell us more about that?

Yes, it’s an album I made over a year or so – a year and half, something like that, in between tours because I make my living from performing live. And I’m quite busy on the road. So it was recorded piecemeal. And I cut a lot of it in my home studio in New Orleans. I got to bring in a bunch of my musician friends to contribute and there’s some amazing talent in that city, so it’s always a joy to collaborate with some of those people. They’re very inspired, talented players.

It’s a collection of songs. All the songs are mine but there’s one that I co-wrote with Taj Mahal a few years back that we included. I’ve wanted to record that for a while. But hopefully it’s a varied set of different flavours and tastes. Often with a big piece of work when you’re making a record you concentrate on putting one step forward and by the time you’ve finished and stand back and look at it all.

Were there any songs that were particularly easy or difficult to write?

Well there’s both really. Some were very quick. Dyna-Mite, the title track, was the first take and pretty much everything is what we played live. Some of the others were recorded differently where you do one track at a time and layer stuff. It’s a bit like doing sculpture where you start with a block of clay and see a shape and start hacking away at it until it takes a form. There’s different ways of making a record and I like experimenting with all of them. I’m still learning how to do it really.

All the records I’ve made are just a little snapshot of how far I am along the process of learning how to make a record. I do a lot of it myself – I write the songs, I play guitar and the piano and sometimes the bass and the drums. So you nudge forward a little bit one each one. One aspect you’re thinking about your drum chops or your piano chops and then you’re wearing a producer’s hat and thinking how all the songs fit together and what the overall pace and flavour is. And every time I do it I take on experience, I get a little bit better at it, so by the time I do 100 I’ll probably have it figured out.

Is that experimental approach fairly typical of your songwriting as well?

Well song ideas come to you in different forms. Some songs it’s almost as though you’ve put your antenna up and your receiver was tuned to the right frequency and a whole song suddenly delivers itself to you. You just have to get a pen and a piece of paper and write it down as it’s coming through. Frenchman Street Blues was like that, Dyna-Mite was like that.

There are other songs where the waters are much more muddied. You kind of get a glimpse of what a song could be but there are bits missing. And you try and force it and force it and you write stuff and you know in your heart it’s not quite good enough or not quite right. And then two years later or someth 20 years later, you’ll be doing something and you’ll suddenly have this sort of epiphany where a little thing comes into your brain and you’ll be like, ‘ah! That’s what I need!’ And you grab that bit and add it to what you started. So there are some songs that I’m probably going to be trying to finish writing until the day I drop. But it’s different song to song, it’s not really a scientific method.

You’ve mentioned spending a lot of your career in New Orleans. What drew you there initially and how has the city influenced your music?

Well, I grew up in a family of musicians and music lovers, and New Orleans music was always part of the fabric. My mum’s generation was that generation of English teenagers that first got American 78s of New Orleans jazz records in the late 1940s and 50s. So there was always an appreciation of New Orleans jazz, although when I was little I thought it sounded like fuddy-duddy music, I didn’t really understand it. My uncle lived in New Orleans for a couple of years and he came back with all these great R’n’B records. I loved the piano style – Little Richard and Professor Longhair and just those sound of all those blues.

That was in the 70s and at the same time I was hearing occasionally a tune on the radio that just pressed all my buttons. There were a few in particular that I loved and later discovered were all from New Orleans. That was the New Orleans soul and funk stuff that was going on in the 70s like Dr John and the Meters. There’s a Labelle tune called Lady Marmalade that was on Top of the Pops when I was about 14 and I just thought that was the greatest sounding record, and I found out years later that was a New Orleans production. So New Orleans jazz, New Orleans R’n’B and New Orleans funk were kind of just always around and formed part of my musical DNA really.

I went to New Orleans after I left school. I’d always wanted to go to this place I’d heard so much about, and it was just such a perfect fit for me I didn’t see any point in going anywhere else after that. I’m still there, I’ve been there for about 30 years now.

Wow! Well there’s lots of songs I wish I could have written [laughs]. Um… there’s a song that’s acknowledged by many songwriters and musicians as being one of the greatest tunes of all time, which is Stardust. There’s been a hundred thousand million versions of it, many of which are a bit corny – it’s a standard. But there’s one version of it which I particularly love, which is by a band called Billy Wall and the Dominoes from the 1950s. But that’s just a fantastic piece of music structurally, and the lyrics are absolutely wonderful. So it would have been nice to be able to take credit for that one. [laughs]

Pretty much what I always do. I’m a wandering minstrel – it’s one of the oldest jobs in the world. We travel and we play music and we entertain people. It’s a bit like being in the circus. So with a new record of course you have to go out and play songs to as many people as you can. People go out and buy the record and they want to hear you come and do it live. So we have a lot of places to play. We’re going to China, Japan, we’ll be coming to Europe in October I believe, and probably a repeat trip to Australia. We go to Australia quite a lot. So it’s basically me with my bag, in a van or on a plane, on a stage somewhere in the world. And the sound of New Orleans music and New Orleans musicians just really translates, because the music is really good. It’s stripped of all the fashionable things people use to market the music. If you take all that away and it’s just the music itself then people dig it, so that’s what we do really. We go round the world playing and putting smiles on people’s faces hopefully. [laughs]

Advertisement. Scroll to continue reading.
In this article:Jon Cleary